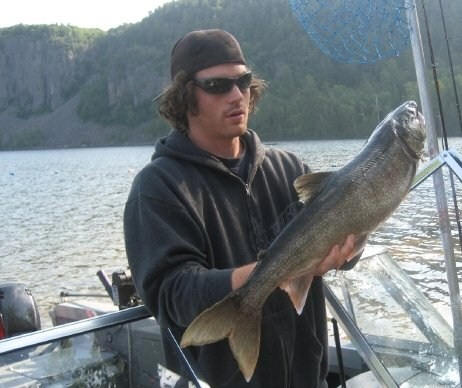 Deep, cold and gin clear water usually represent most lakes that hold healthy populations of lake trout throughout Ontario. During the summer months Lakers drop down in the warming water column. These fish are often very aggressive and concentrated in the most predictable areas in the lake.

Lake Trout during the summer can be found roaming deep flats on lakes chasing schools of cruising baitfish. During the lowlight hours of morning and evening often fish will come shallower or rise in the water column to feed but not near as shallow as they would during spring and fall. Weather your paddling in one of Ontario`s famous provincial parks or trolling in a deep cold northern Ontario lake catching the often illusive summer lake trout can be easy as finding deep water flats.

When trolling for Lakers I will usually begin with a Williams Wobbler spoon followed by a smelt. This rig consists of a Williams Spoon usually in hammered gold/ hammered silver with the treble hook removed and a barrel swivel put in its place. Then tie a 16-36 inch fluorocarbon leader to an octopus hook using a snell knot and tie a small treble hook to the tag end of the line 3-4 inches back. Hook the single hook under the smelts jaw through its snout and the treble somewhere between the dorsal fin and the tail. This part is where you can put your smelt to your desired rotation behind the spoon. The closer you put the hook to the dorsal fin the tighter spin you will receive. If you decide you want a wider, slower spin hook the smelt closer to the tail. This will give the smelt a bigger bend the closer you get to the tail. My second set-up is very similar. Instead of a spoon, I will attach a mini flasher then a 16-36 inch fluorocarbon leader to a minnow teaser.

Lure Jenson’s minnow teaser is basically a tiny plastic box which you insert the head of the smelt in. Secure the smelt by placing a toothpick through the hole of the teaser through the smelt’s head and back through the other hole in the teaser. Teasers offer an amazing slow rolling action behind the downrigger. 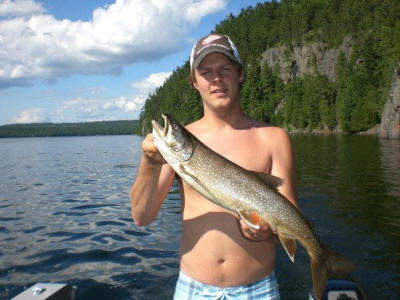 Another option for lake Trout is to troll artificial baits such as smelt imitating body baits or flutter spoons. I usually begin trolling around 1 mph but I will vary my speeds from 0.5-1.5 mph. Use an S- turn trolling pattern with the boat and imply short speed bursts on turns with a neutral drop thrown in the mix every so often. The changes in speed and direction often trigger cautious lake trout in taking the bait. 8 foot medium to medium-heavy down rigging rods are mandatory with 12-20 pound monofilament line with a 4-6 foot fluorocarbon leader attached.

Sometimes more effective than trolling, drifting and jigging over a concentration of fish is usually easier and offers the excitement of fighting big fish on light tackle. No matter if your fishing southern or northern lakes these fish will always provide an impressive fight. Your typical ice fishing lures such as white tube jigs, Swedish Pimples (white and silver), various jigging spoons and jigging Rapala’s will all produce.

Keeping vertical for these presentations is usually going to be an angler’s biggest problem throughout the day. When you are drifting over your fishing area deploy your electric bow or transom mount motor and adjust the speed accordingly to keep your baits vertical. If you are fishing out of a small aluminum in an inland lake simply just keep your engine running and slip it in and out of gear to keep yourself jigging vertical. Drift socks and even dragging a bucket with a few holes punched will work wonders on slightly choppy water.

Both bait casting and spinning reels both work well but I use opt for a spinning when jigging vertically. 10 pound crystal fire line with a fluorocarbon leader attached to the bait for spooky trout. A 7 foot medium action rod is the best option for backbone, strength and even sensitivity.