The northern pike – or water wolf in some circles – is a predatory fish that holds a healthy appetite, both for chowing down and battling tough. It can reach formidable weights, but even those “small” in size are capable of torrid line peels and acrobatic jumps.

Fishing for northern pike is certainly not a science, but there are some basic tactics and skills involved that will ultimately lead to more fish – both on the end of your line and in the boat. Here are some suggestions for those that want in on the action 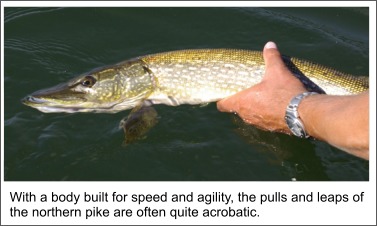 Equipment Considerations
When chasing northerns, the equipment one chooses can often be paramount to the success one achieves. Beefy tackle is definitely recommended, and baitcast combos get the nod all the way.
A standard pike rod would be a 7′ medium-heavy action. This should cover most of the bases, although if the baits you throw are hefty (and the fish grow big in your waters), you may want to upgrade that stick to a heavy-action model.

Try to choose a rod with a lot of backbone throughout the bottom half, but with some limberness towards the top. This will ensure better casting capabilities, but with the toughness to back up a hard-fighting fish.

Baitcast reels should be dependable and tough, with a silky-smooth drag. A gear ratio of 6.3:1 or 7.0:1 is most definitely preferred, as this will allow you to burn bucktails or spinnerbaits back to the boat in an effortless manner.

Line choices are simple – monofilament or braid. If going the route of mono, choose a strength of at least twenty-pound test. For braid, the standard is a minimum of fifty-pound. Regardless of which you prefer, a leader is a must when attaching main line to lure. Wire leaders between a foot and eighteen-inches in length will cover all bases, and can be purchased in either wire versions or heavy flourocarbon styles (80lbs +). The length of your leader should be longer when trolling as opposed to casting. By religiously using a leader, the chances of teeth and gill rakers slicing through your line are dramatically reduced, leading to more fish and fewer lost lures.

Spring Locations
Northern pike spawn during the early spring in shallow water, often when ice still coats the lake. The period directly after ice out can often be your best bet for catching large fish, as the majority of post-spawners will linger in this skinny water for some time, regaining energy and replenishing lost body fat. Most shallow back bays will yield the greatest concentrations of fish, and many can be sight fished.

As fish make their way out of the shallows, they will begin to stage on the first structure point they can locate. This can take the form of emergent weedbeds, points, or the first drop-off situated in the main body of water. Finding these prized gems can often be easy, as working your boat outwards from the bay it self will have you stumbling upon the prime real estate quite easily. 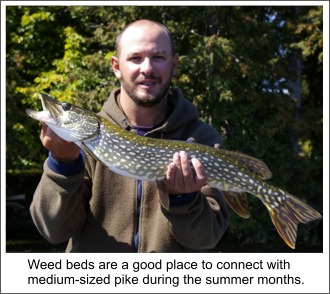 Summertime Patterns
The summer months will see a definite switch in pike locational patterns, starting with a flurry of activity in healthy weedbeds and lines. Finding the green stuff near points and shoals can bring about positive results, as the “hunter-instinct” in this fish will see them patrolling the edges actively.

As the water warms and the season progresses, large fish will begin their descent to the more favourable conditions that can be found in deeper water. Many of these pike will roam in a nomadic manner, intercepting bait schools as they travel freely and unimpeded. Pike anglers may scratch their heads at this time of year, but covering a lot of water in order to connect with fish is often part and parcel of this puzzle.

Small to medium-sized northerns will still call the weed areas home, and can often be counted on for rousing games of tug-of-war when the big girls have seemingly disappeared from the radar.

Fall Tactics
As the water cools and the leaves change colour, pike will again begin to move throughout the water system. In many cases, they will return to the same weedbeds they occupied upon initially leaving the shallows back in the spring.

Slow tapering flats holding a mixture of vegetation will be your best bet, while the healthiest remaining weeds should get your most attention. Some fish will still roam the depths, so don’t overlook a wide variety of water when searching for Mr. Esox. 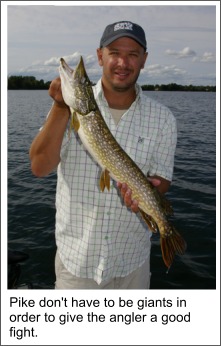 Stocking the Tackle Box
Outfitting your box for pike fishing is not a tough chore. Lure choices are quite universal, and having a small selection of baits at your disposal will not break the bank. Make your choices from the following list, and be prepared to hang on tight to that rod.

Spoons
Spoons have been a standard on the pike scene for years, and for good reason. Simply put – this bait is guaranteed to put fish in the boat. There’s something intoxicating in the wobbling and flash of a spoon that drives a northern mad, and they will often strike these pieces of metal with reckless abandon.
Choose spoons in the 4 to 5-inch size, and give the nod to white/red, silver, yellow, and gold hues. A slow, lazy retrieve will often work best, with occasional pauses and flutters to catch the curiosity of any following fish.

Spinnerbaits and Bucktails
Oversized bass spinnerbaits account for a lot of pike. Their body and hook design allows for an almost weedless presentation, which can work wonders when the fish are up tight to cover and in the shallows. White or chartreuse are two colours that top the list, with orange and black also being effective. Go with willow leaf or large Colorado blades for maximum flash and vibration, in either silver or gold colours.

Four to six-inch musky bucktails can really get the attention of pike, and work equally as well for both of these predator species. Their large profile, fast speed, and flashy blades make for an easy, yet effective bait to throw. Choose contrasting body and blade variations, sticking closely with the colours suggested above. Straight retrieves work best with these lures, with high-speed cranking or bulging being two of my favourites ways to fish this bait.

Jerkbaits
Minnow-shaped crankbaits represent a pike’s favourite prey, and can often trigger strikes when other baits fail. A five or six-inch floating or suspending crank, twitched back to the boat, is as simple of a retrieve that’s needed. Firetiger, silver, blue, perch, and baby bass are all proven colours, and utilizing baits with rattle chambers will make them even more attractive. Experiment with diving depths, and keep in mind to always run your bait higher in the water column than the actual level of the fish.

Topwaters
In terms of excitement, nothing can compare with the surface strike of a northern pike. Oversized buzzbaits, walk-the-dog style lures (think Super Spook), and large prop-baits will all bring a feeding frenzy to the top.

Predominantly thought of as a shallow water lure, tossing topwaters over weedbeds, off points, and along rock and weed shoals can bring about positive results. Slow and steady is often the key to action.

Soft Plastic Stickbaits
Sluggos and Senkos are two popular soft plastic sticks, and both work well when targeting northern pike. Primarily used during the spring and early summer months, the tantalizing fall and wiggle of these baits can trigger some pretty hefty strikes. Often thrown to finicky fish, or those that have been spotted lurking in the skinny water, a soft water stick can fool even the most wary of fish.
Six-inch baits are a good choice, with white, chartreuse, and pink being optimum colours. Rig these baits wacky (through the belly) or Tex-posed (through the nose) with a 4/0 worm hook.

Check out Justins Youtube channel dedicated to wildlife and the great outdoors. Here he showcases his favourite nature, trail cam, fishing, and outdoor adventures. Watch video footage highlighting species such as whitetail deer, owls, loons, and more. www.youtube.com/c/JustinHoffman Be sure to subscribe and stay up-to-date on all of the fun!