At some point in the ice fishing season the boat starts to look inviting.  This is the time for either rigging the new boat or adding goodies to the old boat, and it just seems required that you have to hit the water for a test drive.  Rivers like the Illinois, and parts of the Mississippi, open up well before the lakes and reservoirs, so it is easy to see why we wanted to review the newest trends in river walleyes. 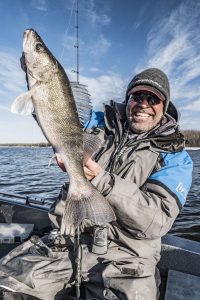 Many walleye rivers develop ice, so in some cases the fish have not seen lures all winter but then again, the fishermen also have not developed patterns or locations.  During the initial spring trips, there will be miles of river ahead of you and being able to cover water and later focusing on a few key spots makes a one- or two-day trip this time of year a success.

At first, it’s about locating fish.  Since March is often pre-spawn, many smaller fish have pushed up to tailwater areas behind dams looking for current and rocks.  The consistent flow of water and the scour holes below locks and other structure provide excellent holding areas for these fish.  Another area to check includes large flats from 8 to 30 feet deep with some sort of general protection from the current.  This is not slack water, but areas with consistent depth generally after bends or islands. Good areas show up on the graph as small dunes or waves in the sandy bottom.

Water flow trends also affect fish location.  Rising water allows fish access to newly flooded banks, sloughs, and rip rap that were previously dry.  Falling water brings the fish right back into the safety of the deeper water.  Do not be afraid to fish shallow in early spring since river fish have no problem chasing new food sources in the slightly warmer water.

Finding fish in rivers with sonar can be tough.  To stay out of the current, the fish hunker down right near the bottom and sometimes behind a small depression, rock, or other obstruction.  In some ways this simplifies rivers because the focus shifts from finding fish to simply maintaining a perfect presentation throughout long stretches of river. 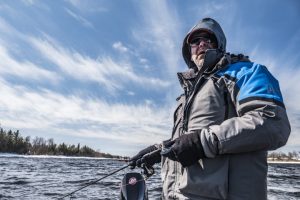 Fortunately, fishing through deeper areas with lead core or three-way rigs is efficient and effective and, unlike their lake counterparts, river walleyes seem ready for a meal at any moment. Lead-core line like the Bass Pro Magibraid in 18-lb test slices through current with ease, and two rods with lead core along with two three-way rigs with heavier weights, keeps all of the baits separated and in the strike zone just inches from the bottom.

River flats are just not that big so three passes through the area at different depths should give a clue as to fish activity in the area.  Switching back and forth between #5 and #7 Berkley Flicker Shads or Berkley Shallow Cutter 90 lures in different colors are all of the changes you need to make.  All of these lures have rattles to attract fish in the often-dingy waters.  Rivers tend to have plenty of saugers so be sure to include some bright colors like Clown, Table Rock, Copper Head and Prime Time in the mix. If the water is dirty, try some Berkley Digger bass cranks in sizes 8.5 and smaller on your leadcore.

Troll upstream using a gas kicker for propulsion and the electric trolling motor for steering.  This is where the Tailfin kicker control system along with GPS speed control on the electric comes in handy.  Due to the generally cold water, walleyes will not move far up into the current for a meal but will move sideways to hit a lure as it passes.  Speeds range from 1.0 to 1.6 mph. If the current seems reasonable, try a couple of downstream trolls.

By lunch the exploration of two or three spots along the river likely produced a few fish.  With a productive depth zone and area identified it is time to slow down and jig.  Vertical jigging while slipping the current in rivers is the most effective way to fish because the lures naturally move downstream with the current into the mouth of waiting walleye.  Choose a Bass Pro Shops Walleye Angler Current Creeper Walleye Jig for use with live bait or a Berkley Gulp 3” Minnow.  The shape of the Current Creeper jig makes it easier to feel less weight in heavier current.  Always use the lightest jig that can remain vertical given the conditions so that the fall of the jig is slow enough to look natural.

Different days will prove one bait better than the other so try both live bait and Berkley Gulp! Products.  Rotate colors including gaudy pinks and purples.  Hair jigs tipped with a minnow are another option and even rig two minnows or two Gulp! plastics on the same jig to bulk up the offering.  Rig up another rod or two with hard baits like a Moonshine Lures Shiver Minnow (Size #2) or a Johnson Thinfisher Blade Bait so it is easy to switch between lure actions and vibrations.

Drifting downriver takes some practice.  The boat drifts backwards (bow upstream) so the electric can effectively resist the current.   The correct speed is just slower than the flow of the river.  Jigs should hang straight below the boat thus requiring constant adjustment of speed and boat direction.  Keep an eye out behind you for other boats and obstacles.

Jigging strokes vary.  The standard quick lift and slow drop used in lakes works, but flagging the lure above bottom is another option.  Instead of lifting the lure up and letting it fall like a standard jig stroke, start with the jig a foot from the sand, let it fall, and then stroke the jig back to the higher position.  Adjust the length and intensity of each stroke (and each direction) to dial in the mood of the fish for the day.

Sensitivity while jigging makes a big difference when the current is fighting your lure.  Use high-quality rods with an extra-fast action like the Cabela’s Prodigy available in 6’3” and 6’10” lengths.  Rod length for vertical jigging is a personal preference.  Shorter rods have a bit more feel, but less rod tip motion and rebound for the hookset.  When hovering 20 to 25 feet above a fish in current sometimes the extra length and bend in the rod pays off in more fish hooked well and landed, especially when working two rods at once.  Choose the medium-light rod for shallower situations and the medium action rod for faster currents and heavier jigs.

With the strong GPS anchoring of most trolling motors casting a river is no longer a chore.  Walleyes cruise around rip rap, inlets, behind islands, and wing dams.  Setting up and casting jigs and crankbaits like the Berkley Flicker Minnow to these spots triggers some great bites.  Sun-warmed rip rap, especially when the rocks are large enough to also act as current breaks, can be especially fruitful.  Switch between the standard and shallow Flicker Minnows as needed.  The walleyes are not necessarily on bottom like in a reservoir so choose a jig with a slow fall that barely nicks the top of the rip rap to avoid too many snags.

In some way’s rivers are simpler.  The fish move but not as much as in reservoirs and hold in predictable locations throughout the year.  After adjusting for water levels and current flows rivers may just be the ticket to put you on The Next Bite!