Increase Your Success During Late Ice 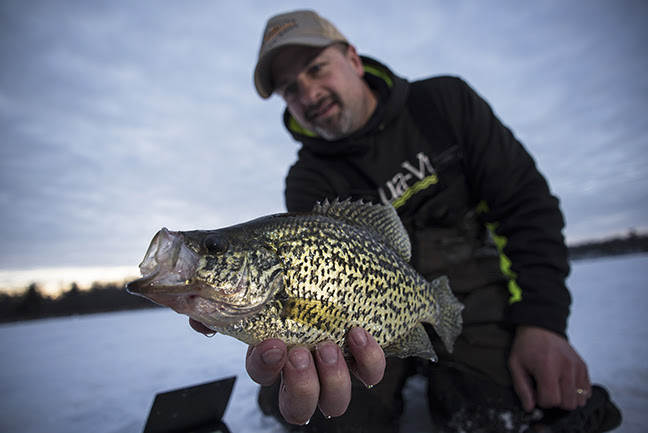 Increase Your Success During Late Ice

Seek, Drill and Stay Mobile for Late Ice Crappies. In smaller, shallower lakes, crappies are typically located and caught throughout much of the winter season over main-lake basins. In large, deep lakes, however, they tend to avoid the deepest areas and use flats, humps and basins ranging from 20 to 40 feet deep. But crappies are also notorious for suspending. Depending upon conditions, they can be found anywhere in the water column, creating an additional variable in the angling equation.

As the ice-fishing season nears its end, crappies transition from deep water wintering areas towards shallow bays, channels and river mouths in preparation for spawning. Depending on where and when you fish, concentrations of crappies will be present along a relatively straight line between these distinct areas. 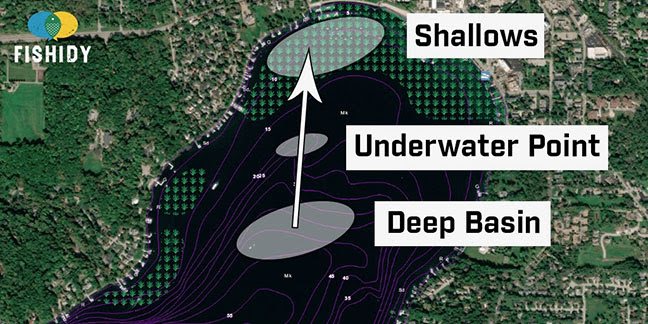 During the late-ice period, take a stab at identifying some of these likely travel paths between wintering areas and spawning areas on the lake you plan to fish using the Fishidy app or map on your Sonar/GPS. Look for potential staging locations where cover, structure or current variations are present along those paths.

Once you’ve identified attractive areas, gas up the auger and get to work. Use your GPS to confirm your location on the ice, and pick a variety of sweet spots over the particular structure you plan to fish. A larger fishing party is beneficial because you can share the work of drilling holes and checking them for fish with sonar. Once you mark fish, take the time to drill more holes. It’ll save you time in the long run as you’ll waste less time fishing an unproductive hole when an entire school may be located just 10 or 15 feet away.

Once the crappies are located, hole hopping is the key to keeping busy catching them. Anglers willing to leave the comfort of their fish houses and use their electronics to fish from hole to hole are the ones who catch the most crappies. Keep moving if a hole doesn’t show a fish on your sonar. Keep drilling more holes if necessary until you get a sonar return. Then drop down, catch a fish or two and move on once the action slows.

Fish Fast for Late Ice Crappies. Crappies display a variety of moods, and their responsiveness to various presentations can change throughout the day – often rapidly. Late-ice crappie anglers should be prepared with a variety of offerings, from small tungsten jigs tipped with thin plastics to relatively large jigging spoons tipped with spikes, waxes or minnow parts. The key is being prepared and willing to show fish a variety of presentations and profiles to determine which one best matches their mood at that moment. Then it becomes a game of presenting the preferred bait to numbers of fish, which means moving on quickly from barren holes.

When a fish shows on sonar, try stopping the bait 4 to 5 feet above it and slowly working it down if necessary. You’ll often see the fish begin drifting up towards your bait immediately. If they do, slowly raise the bait while twitching it ever so slightly to make them chase it. Once you get them moving, they’ll usually charge it. If they refuse it, it’s time to try a different bait.

Fishing fast means fishing heavy. Getting down to a fish fast — hopefully before it leaves — is critical to maximizing opportunities. Tungsten jigs sink fast while retaining a delicate profile, and are the best choice when crappies show a preference for smaller offerings. Jigging spoons are great options anytime crappies are aggressive and eager to attack a larger profile. They easily punch through slushy holes and get back down to other fish quickly once one has been caught. 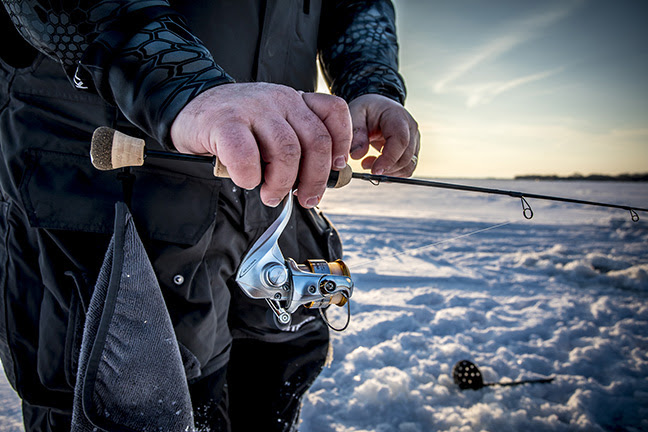 Turkey Baster Panfish?. One surefire strategy for determining the types of wintertime foods preferred by bluegills, perch and crappies is to take a living, breathing sample. Fly fishermen use a small stomach pump (resembles a miniature turkey baster) on stream trout in order to match the hatch. It works with panfish, too, and it’s completely harmless to fish, other than depriving them of recent eats.

Fill the pump with water with a quick squeeze, insert the tube into the fish’s mouth and a few inches down its pharynx, which leads directly to the stomach. Be gentle! Squirt the water into the stomach and release the pump, which vaccums up any recently ingested critters. Squirt said contents into your palm and have a looksee.

A fish’s recent meals reveal the anatomical details of each eaten bug, as well as plenty of the goo that represents zooplankton and other partially digested “whatnot.” You also learn potentially productive lure colors, and can quickly tie on something you know panfish will want to eat. Identifying specific prey items also suggests fruitful jigging cadences. Mayfly larva, for example, swim with undulating tail kicks that can be mimicked with various soft plastic baits.

The Strength of the Snell. While most ice anglers rely on one or two favorite knots, the truth is you can do a lot better than an improved clinch, Trilene or other customary line-to-jig connection. If you’ve never tried a snell knot, including versions such as the Marka knot or a Uni-Snell knot—you’re missing out on a ton of advantages for almost any jig presentation, particularly for panfish jigs and ultra-thin mono or fluorocarbon lines. Actually, the advantages of a well-tied snell overwhelm those of traditional knots.

One, a snell knot positions your jig at the ideal horizontal position—no need to reposition your knot, ever. Two, the knot is recessed and tied around the shank of the hook, so it rarely requires retying (you can often fish most of an 8-hour day with the same snell knot and jig.) Three, snell knots are almost bulletproof-strong. Finally, the knot itself acts as a form of soft plastics keeper, pinning the chosen bait tight to the jig collar. The plastic further protects the knot by sliding right over the top of it. Moreover, you can tie either version with traditional eyelet jigs, or Russian “through-head” jigs. Here’s a link to a few top ice jig knots (see #3, #6A and #6B).