About this time every year it seems that fishermen start to get “the itch.” Cabin fever has set in, the ice is getting thin, and they all know that a great spring bite is just around the corner. For many, the “cure” for this itch is getting serious about buying a new boat or putting something new on their current boat.

One thing to consider as you begin to think about the best boat and additional equipment needed to fit your needs is how rough the bodies of water you fish can get. Having the right equipment and knowing how to handle the boat in waves is essential to prevent a pounding and to stay dry during the ride.

Maintaining control of the boat is critical when you are in waves. This is where the WavePro boat seat pedestal comes in. These pedestals absorb the “shock” from the wave as seat goes down, but it has a soft rise that doesn’t spring you from the seat on the way back up, allowing you to maintain control. 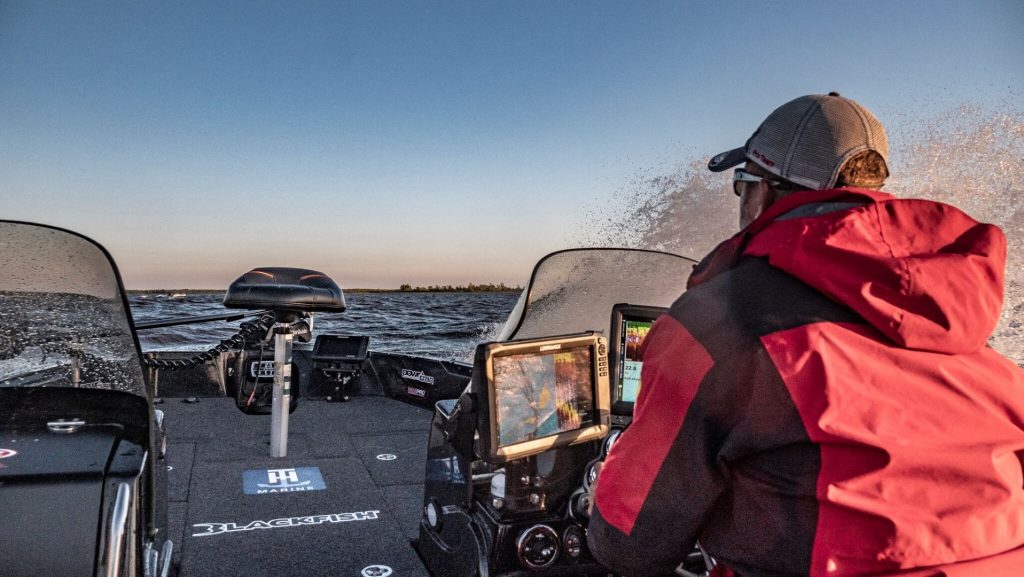 When a lot of people look at boats, especially a deep-v walleye boat, they worry about hull weight. However, in rough water, weight is your friend! The boat will stay in the water and cut the wave instead of hopping it. Even if it cuts off six-inches of the wave, you will have a smoother and drier ride. Be sure if you are buying a heavier boat you are also buying a motor with the maximum horsepower it is rated for. The boat is going to need horsepower to power through waves and in the worst case scenario, so it won’t stall as it is traveling up a very large wave.

To handle a larger engine, good transom strength is also important when considering what boat to buy. The new trend in fiberglass boats is to no longer have a wall in the back to mount the motor on, but instead there is one solid piece to mount either the engine or a jack plate for the engine.

When traveling in waves there are two things to consider. The first is the direction the waves are running and the second is the equipment to handle them. Again, the types of lakes you fish will dictate the amount of equipment you need to handle the types of waves you will come up against.

There are several different directions that you can take a wave on from. The first is going into the waves. As you are choosing a boat, you will want to take into consideration if you will be fishing large bodies of water such as Green Bay, Lake Erie or Mille Lacs. On lakes like these, there tends to be longer spans between waves, which means that a 21-foot boat would be best suited for your needs. Shorter boats will handle waves in smaller bodies of water. Now, that doesn’t mean you can’t take your 18 or 19 foot boat out in big waves, but as soon as you can’t span the waves and “run the tops” you will have to slow down.

The other thing you have to worry about when running into the waves is keeping the boat as flat as possible. The more you can do to keep the attitude of the boat level, the better your ability will be to run in waves.

So how do you keep it level? One thing that all boats have the ability to do is trim the engine down. One extra piece of equipment you can add to your boat is a jack plate. On our Nitro ZV21 we use the Atlas HD Hydraulic Jack Plate to mount our Mercury 350 Verado.

A lot of times when people think of jack plates, they think they are used to lift the engine to get it out of shallow water or for getting to top end speed (a couple extra miles per hour). These are both valid uses of a jack plate, but we like to use it as a tool to keep the attitude of the boat flat by using the plate to lift the engine up while keeping the engine trimmed under the boat. This is key because not a lot of people use a jack plate for this. It really helps in rough water and more people would buy them if they realized this.

Now we are going to take a 45-degree turn and talk about quartering into the waves. The problem with quartering the waves is that they hit the front side of the boat hard. Because the waves are not hitting the bottom of the boat first, not only will the waves be hitting hard, but the water will be pushed ahead and out right into the wind, so you will be running into the spray.

So, to get a better ride when quartering waves you’d like to be able to lift the side of the boat that is getting hit. To do this in the past you would move people around the boat to weigh down the opposite side of the boat. A much better approach is the use of trim tabs. We use PowrTran’s Pro Tabs. Trim tabs are two plates mounted on the transom, they tip down into the water and make the bow of the boat tilt one way or the other. These work wonders because you are able to change the left or right attitude of the boat without moving people!

The tilt is significant enough to have these quartering waves hit more of the bottom of the boat. On a boat like the ZV19 and ZV21 and even the aluminum Tracker Targa’s the hulls have built in reverse chines and strakes which throw the water out flatter (thus a drier ride) and give the hull multiple re-entry points (thus a softer ride). By tipping the boat with trim tabs, these hull features can kick in an do their thing. 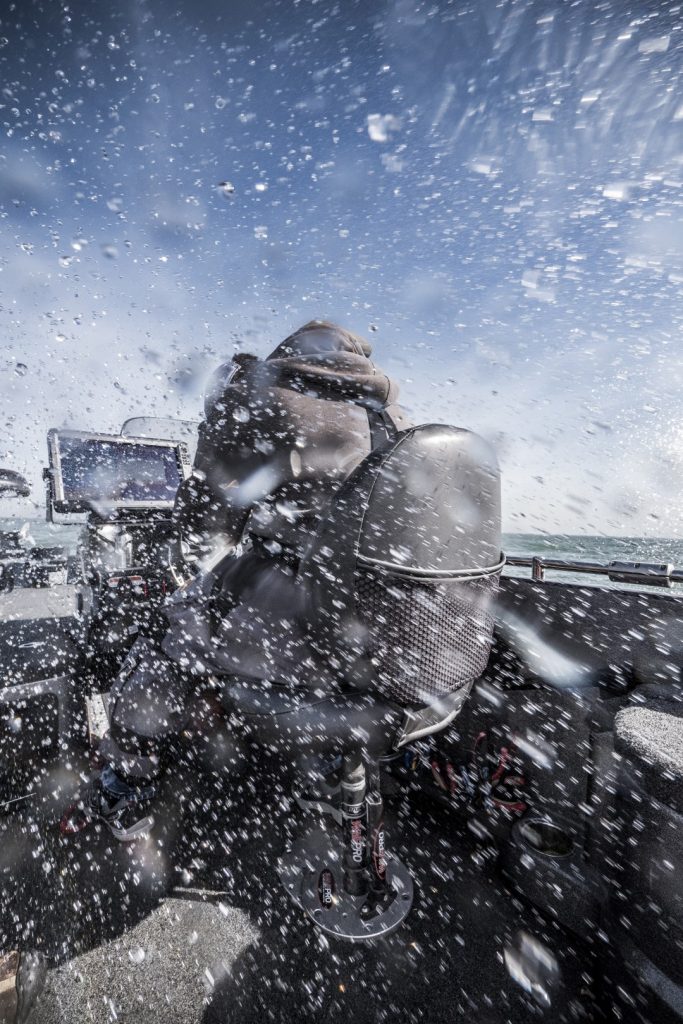 If you turn the boat another 45-degrees you will now be running the troughs (running the waves sideways). How well you run the troughs is really dependent on the skill of the driver, because you have to look ahead and see flat spots between the waves. This is where horsepower comes into play and it is why you want max HP on your boat (on our boat it is a 350hp Mercury Verado), so when we see the hump of the wave we can back off, get over it, and then accelerate on the flat spots. You can also use trim tabs in these conditions. Just tweak them down a little to put the down side away from the wave. Learning to run the troughs will come with experience.

If you make one last turn and run with the waves, you might think it is going to be easy from here on out because the waves are pushing behind the boat. In smaller waves that’s the case, but on big waves each one turns into jumping ramp. Your boat will go up and the bow will lift into the air and then come down hard! This is also where the most potential comes for spearing the next wave (the bow is pushed into – not over the next wave). So how do we cope with traveling with the waves? You can literally try to keep the nose up by trimming the engine up slightly. This will help keep your bow on top of the water because the engine is pushing it up. You will have to slow down in this situation though because the bow will also be pushed higher into the air on top of the waves.

Some boats, like the Nitro ZV21 have a very buoyant /wide bow, so when it hits the water, it will tend to rebound quickly and not spear.

Now, if your boat tends not to spear waves, one way to travel on following waves more quickly is to try to keep the boat tight on the wave by using trim tabs. In this situation, put them both all the way down so the bow follows the wave instead of hopping it. You can also raise your jack plate a little bit. It should be noted if you try to do too much by giving it too much horsepower, you can still spear a wave. You need to know your boat and the acceleration and trim tab combos that work best.

Running rough waves takes good driver skill, the right boat and is easier with the aid of some accessories. But no matter what, is also important to always wear a PFD while running. There are a lot of inflatable versions that fit nicely and will inflate when you hit the water. In addition, always be sure your kill switch is on when running so the boat stops if you find yourself in trouble. Remember, you can never be too careful when running the waves on your way to your Next Bite!