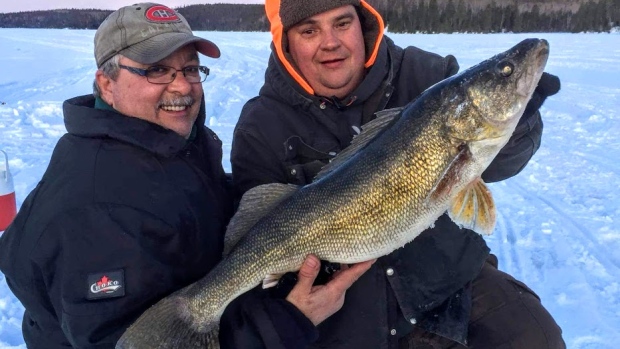 A potentially record-breaking walleye got the break of its life last weekend.

On March 10, Robert Monty of Dryden, Ont., caught and released a giant walleye that he said was record-book calibre. The experienced angler had no idea when he started on the water near the northwestern Ontario city that day, it would end with such a bang.

“We went for crappies in the morning,” said Monty. “We never had too much luck, so we headed her back to the walleye spot.”

Monty was fishing with his wife Donnalee, his friend Gilbert Grandbois and Grandbois’ partner, Sheila Sjodin.

Monty said the spot they fish is near a creek mouth and is known to hold walleye in March. He said the walleye fishing is usually best in the evening.

“We got there about 3 o’clock,” Monty said of their hot spot. “It was about eight feet of water, and we set up our lines.”

He added that when the sun started “heading down the trees,” he began to work his two jigging rods. Both were baited with a jig and a minnow. Monty said he had just left one hole and was going to another one when Sheila cried “Robert, you’ve got a fish!”

The angler then grabbed the rod and set the hook. “It ran about two or three times on me,” Monty said. “My friend was looking at me and I said ‘I think we have something big here.'”

Monty said he could hear the eight-pound test line rubbing on the ice and feared a break-off. “I said ‘I can’t get his head up,'” he said.

That’s when Monty said he realized this was no normal walleye. Grandbois quickly came to help. He grabbed the fishing line as Monty battled the fish just under the hole with his short jigging rod.