Fish will be tagged and sent back out into Lake St. Clair

Nov. 1, 2018- On a cool, October morning on a lake as clear as glass, volunteers geared up at the Belle River marina to reel in the big muskie. 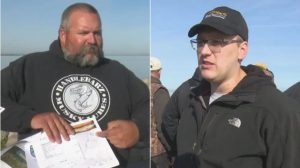 About 40 anglers sent their fishing lines into the water alongside employees of the Ministry of Natural Resources and Forestry to — hopefully — catch at least 20 muskies. They will be tagged and sent back out into Lake St. Clair.

While some do their fishing from a boat, others help from the shoreline — like Mike Parker who’s providing his assistance for the second year in a row, giving muskie tours. But that’s not all he does.

“I help them with muskies when they’re tagging them. When the boats come in, I’ll help get the fish off the boats. Help them with the tanks, getting the stuff ready. Just here to participate and do some video and get the word out to the public,” said Parker.

The health of the muskie population is important for business. Parker said there was a 2006 outbreak of a disease which killed of tens of thousands of muskies in the lake.