In the calm before the storm, it is pretty typical for our good buddy Santa to give us a call to go fishing one last time before production ramps up in the North Pole for the Christmas season. This year we decided to go to a cabin on one of our favorite lakes.

We arrived with our rigs early Friday evening and lit a campfire outside. Just as we were settling in to our chairs we saw Santa approaching on his sleigh. As he approached, we noticed something seemed a little bit off. “It looks like someone is with him,” said Keith.

Sure enough, there was someone else in the sleigh. It was Mrs. Claus! The guys had never met Santa’s better half, so they were pretty excited.

The sleigh landed and Santa introduced her to Gary and Keith. The group spent the next couple hours chatting by the fire before turning in for the night.

The next morning was one of those classic walleye days. The temperature was just right, the sky was slightly overcast, and there was a good walleye chop going. As Santa looked out over the lake he commented, “Wow, looks like a back-breaker out there. Kind of like my honey-do list!” 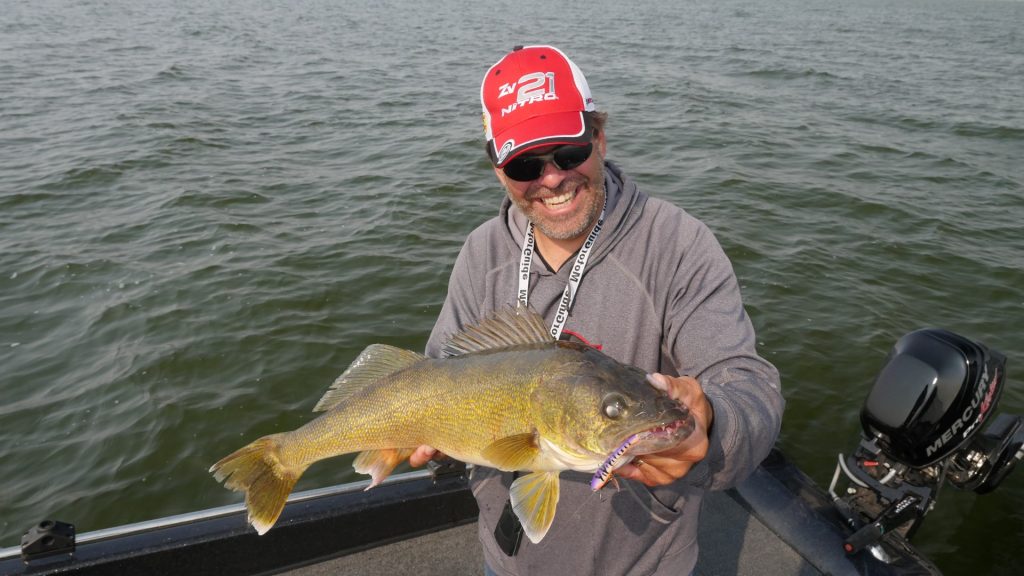 Gary and Keith gulped, not knowing what kind of reaction Mrs. Claus would have.

She simply paused and gave him “the look” before saying, “Really? How about a challenge? Let’s split up today. It will be Gary and I competing against you and Keith. Meet back here at 5 o’clock, and the team with the most fish wins. Losers have to clean them so, you might want to just add that to your list now.”

She then smirked and looked at Gary. “We got this!” Gary said, “You bet we do!” They then hopped in the Nitro Z21 and took off.

Santa got into the other boat and Keith fired up the Mercury. They hadn’t even cleared the dock, but Santa was already white-knuckled from clenching the seat in anticipation of a rough ride. It didn’t take long for him to loosen his grip and enjoy the trip across the lake.

When they finally stopped he said, “Wow, that wasn’t bad at all!” Keith pointed down below his seat. “That’s because you are riding on a WavePro Air Suspension Boat Seat Pedestal. The air spring chamber allows for 0-200psi of air spring preload to accommodate rider weights up to 380lbs!”

“I wish I would have known that before I made the back-breaker comment to Mrs. Claus,” chuckled Santa.

Keith didn’t waste any time trying to put fish in the boat. He handed Santa a rod with a Moonshine Shiver Minnow tied to the end. Santa took a close look at the bait. “What is this?”

Keith replied, “That’s a money bait! These little lures have done well for me over the past couple of years in tournaments. You should use them for stocking stuffers.”

“That’s the Cranberry Shad. It’s one of the holographic patterns. You might want to cast it out big guy. You aren’t going to catch any fish with it out of the water,” Keith replied.

Santa took the hint and made a cast going right over Keith’s line, creating the first tangle of the day. While they were working on getting their lines separated, Gary and Mrs. Claus were setting up for their first trolling pass.

“We’re going to be running one of my go-to baits to start out,” said Gary. “This is a Berkley Flicker Minnow. I won a tournament a couple years ago on them and they have been producing ever since. And check this out.” Gary opened up the rod locker and pulled out a 9 ½ foot Bass Pro Shops Walleye Angler Trolling Rod. “This is a new rod coming out that is made of lighter high-tech materials. Not only can it collapse down small enough to fit in the rod locker, but I bet it would fit just right in Santa’s sleigh to hand out on Christmas Eve.”

As he put out the line, Mrs. Claus had a puzzled look on her face. “What is that yellow thing and what does it do?”

“That’s an Off Shore Tackle Planer Board. It pulls the line away from the boat when we are trolling,” said Gary. “These boards are perfectly ballasted, which makes them great for running in waves like this.” A minute later Mrs. Claus saw the board slide back and grabbed the rod to reel in the first eater of the day.

From a distance, Keith and Santa saw the high-five in the other boat and knew they were already one fish down. With his game face on, Keith made a cast to a hump in the opposite direction of where Santa was casting. “Got one,” Keith yelled. “It’s a nice fish! Grab the net!”

Back in the other boat, Gary decided it was time to switch things up. “We’re going to put on another one of my favorite baits,” he said as he pulled out a different lure. “This is a Berkley Flicker Shad. Let’s run it about 15 feet down. Let me show how to know how much line to let out to get the lure where you want it.”

He pulled out his phone and brought up the Precision Trolling App. “It’s really easy. Just select the lure you are using and dial-up how deep you want it to run. The app will tell you how many lines you need to let out!”

While she was setting the line, Gary kept the boat on course with a FOB around his neck that runs his PowrTran Python Kicker Steering System from anywhere in the boat. There is no need for two throttles to keep the boat at the right speed either, as the system works in conjunction with the iTroll, which can fine-tune trolling speeds to a 1/10 th of a mile! 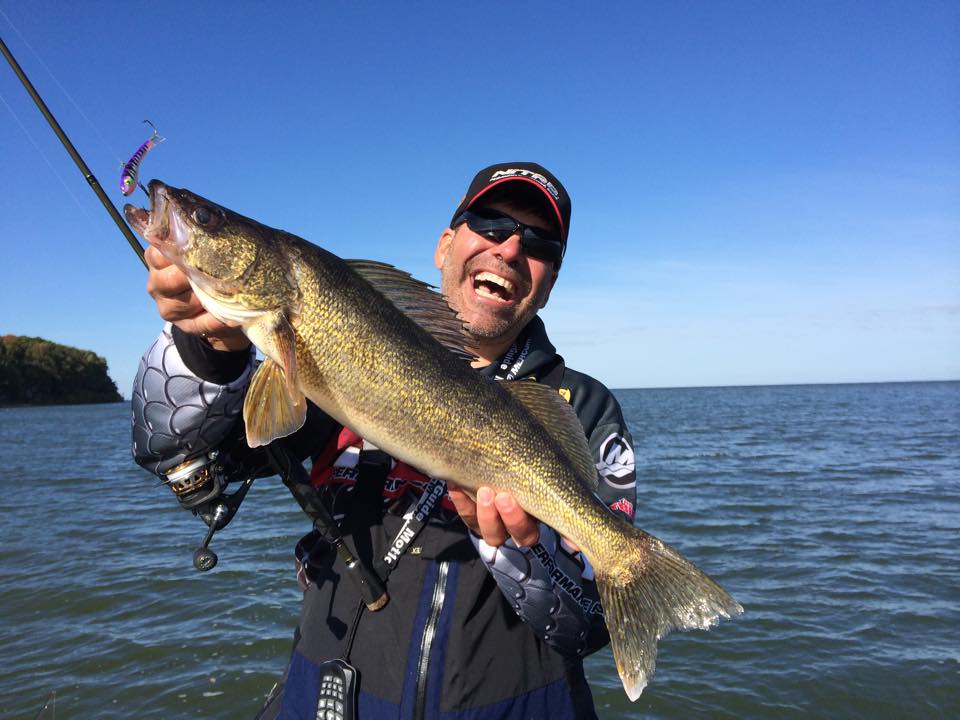 Back in Keith’s boat, Santa had started pacing around. Keith thought that he might be getting nervous. Even though they had caught a few more fish, they knew that their completion had also boated a few more. Finally, Santa spoke. “Your Lowrance looks different. It seems easier to see than your old one.”

“You’re right! It’s the new Lowrance HDS Carbon. It has great LED backlighting and an anti-reflective coating giving it wider viewing angles. It also has a high-performance processer to give faster redraws.”“I just may have to put one of those under the tree for myself,” Santa joked.

“I just may have to put one of those under the tree for myself,” Santa joked.

With the sun starting to go down it was time to head to the cabin to see who would be cleaning fish. Back on shore, each team was eager to show off their catch, only to find that they were tied! Gary and Mrs. Claus had the heaviest fish, but Santa and Keith had the longest fish. This meant there was only one way to declare a winner. There would have to be a sudden death fish-off from the dock.

Santa and Mrs. Claus would go head to head. Santa reached into his tackle box and put on something that looked like a cross between a Hula Popper and a Jitterbug. “Made it myself in the workshop,” he proudly proclaimed.

“Oh boy,” said Mrs. Claus. “I feel like I need something unique to compete with that.” Gary smiled and said, “Here try this!” Mrs. Claus shrieked with excitement. “Where did you get this? This lure looks amazing!”

“For the past several years a lot of guys have been custom painting their lures to get exactly what they want in a pattern. Well now Renegade Outdoor Innovations is taking custom lures to a whole new level! Not only can you create your own pattern, but you can also take a picture of a perch or another bait fish and have that pattern put on a lure. The coolest part is not only can a custom pattern be put on a crank bait, but it can be put on an artificial tail as well. Go to renegadeoutdoorinnovations.com and check it out!”Santa and Mrs. Claus headed down to the dock to begin the fish-off. We would tell you how the story ends, but we’re pretty sure you can figure out who got The Next Bite!

Santa and Mrs. Claus headed down to the dock to begin the fish-off. We would tell you how the story ends, but we’re pretty sure you can figure out who got The Next Bite!