Stick ‘em in September – By Gary Parsons and Keith Kavajecz

Mother Nature likes to play havoc with the weather this time of year, with hot days and cold nights. Depending on the year, you can also start to see turnover as we transition from summer to fall. This makes the September bite tough for even the best walleye anglers. While some view this time as the live well “half-empty”, we like to view it as “half-full”. This is the time of year we can challenge ourselves to entice lazy eyes with glide baits like Moonshine Shiver Minnows and blade baits like the Johnson ThinFisher. 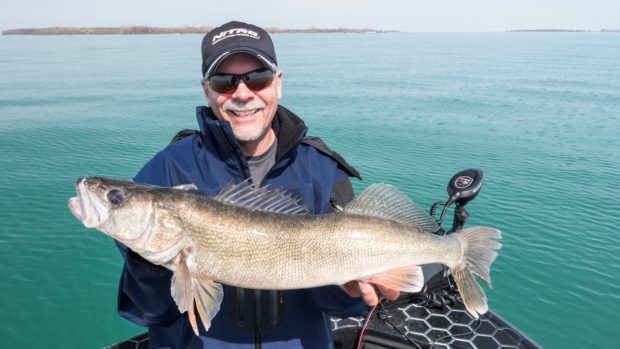 While some view this time as the live well “half-empty”, we like to view it as “half-full”.

Let’s go through how to use each of the baits. There are two options for fishing the blade baits. To fish them vertically, drop the lure to the bottom and aggressively lift it up six to twelve inches. You will be able to feel the vibration of the lure on each stroke. It is the combination of flash and vibration that make this lure attractive to walleyes. Experiment with how aggressively you work the lure, as it will vary from day to day what the fish want.

The second option is to cast them out, which is almost always the case on the Great Lakes. Work the ThinFisher just like you would a jig, moving it just enough to make it flutter. On the retrieve, hold your rod at the 11 o’clock position and let it swim back to you. While you can be aggressive as you lift your rod, it shouldn’t be a giant sweep. Once you get the lure back to the boat, don’t be afraid to vertical jig it, as sometimes the fish will follow the lure and then hit it when you change the action. 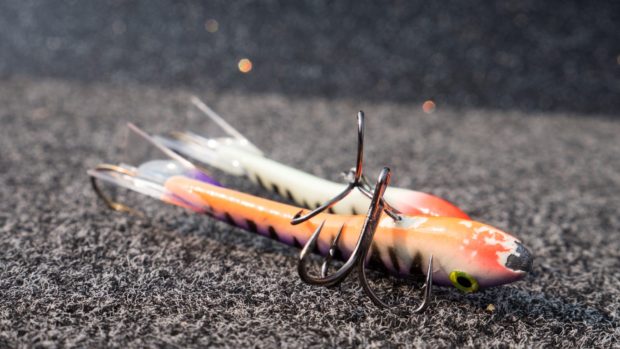 These lures were originally intended for ice fishing. We replace the small “ice fishing” treble hook on the belly of the bait with a Mustad UltraPoint KVD Elite Triple Grip Treble Hook (TG76BLN).

Chrome/Blue and Chrome/Gold are favorite colors in clear water, while Firetiger is a great choice for dirty water. Purple Tiger works extremely well in both clear and dirty water.

We use no stretch 10lb Berkley NanoFil line and a two-foot Berkley 100% Fluorocarbon leader with blade baits. A medium to medium-heavy 6-7 foot rod with a lot of backbone, such as the Bass Pro Shops Walleye Angler WL70MS is a good choice for this technique.

When using a Moonshine Shiver Minnow, which is a minnow shaped “glide bait”, we like to use a “walk-the-dog” type motion, followed with a glide. This is done by working the bait close to bottom but rarely hitting bottom on the retrieve.

Start by casting it out with 6lb Berkley NanoFil line and letting it hit bottom. Then sweep the rod up three feet, almost to the point of snapping it up. When you do this, the lure will dart out to the side. Then quickly drop the rod tip so there is slack in the line. This allows the bait to turn around and glide to the center as you reel up the slack line.

Right before your lure hits the bottom, repeat this cadence 2 to 5 times. On the last rip, hold the rod tip up, letting the bait glide to the bottom. Most of the bites come on the glide, so be ready to set the hook when you feel weight on the end of the line!

These lures were originally intended for ice fishing. We replace the small “ice fishing” treble hook on the belly of the bait with a Mustad UltraPoint KVD Elite Triple Grip Treble Hook (TG76BLN). Use a #4 hook for the #3 Shiver Minnow and a #6 on an “O” ring for the #2 Shiver Minnow. This bigger hook has an inward bend that helps keep the fish hooked, but a short shaft to prevent foul hooking.

Bloody Nose is a favorite color and the new holographic patterns work well too. We really like to play with colors on Shiver Minnows, as the walleye seem to want something different depending on the day. 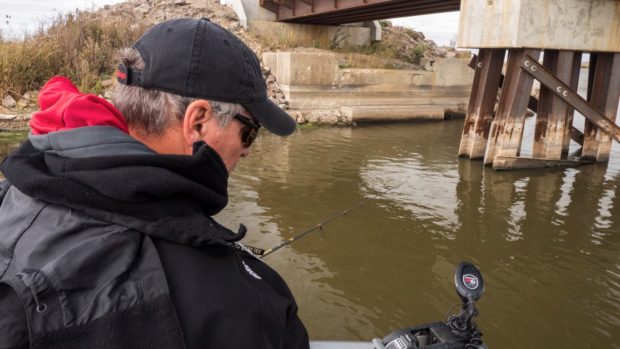 Shortly after that, Gary noticed a fish next to a boulder, so he put his MotorGuide Xi5 bow mount trolling motor in “anchor mode” and began working his blade bait vertically.

You never know which lure, the Shiver Minnow or the ThinFisher, will shine in September. A great example is the NWT Championship on Devil’s Lake last year. Gary was fishing with co-angler Karl Sprengel, father of walleye pro Korey Sprengel. During pre-fishing, Gary was catching bigger fish with the ThinFisher, so he began with that. He gave Karl a Shiver Minnow to use. They started the day fishing current by a bridge, before moving to a rock pile that topped out at 38 feet. Right off the bat, Karl hooked into a 28-inch walleye on a Shiver Minnow on the rock pile.

Shortly after that, Gary noticed a fish next to a boulder, so he put his MotorGuide Xi5 bow mount trolling motor in “anchor mode” and began working his blade bait vertically. Moments later he stuck a 31-inch pig! That day Parsons and Sprengel brought in one of the biggest bags of the entire tournament!

The bites are there this time of year! Not only are the ThinFishers and Shiver Minnows consistent producers in September, but they will also help you get your Next Bite all the way through the fall!