It looked like it was going to be a great day for ice fishing. The sun was shining, there was a slight breeze, and from what we had been hearing, the fish were biting! So we packed up the truck and headed out to our favorite lake.

We had just parked on “the spot” when we saw something strange in the sky. At first we weren’t sure what to make of it, but as it got closer we knew exactly who was coming our way. It was our good buddy Santa Claus!

Turns out he had gotten word that the bite was on too! We walked over and exchanged pleasantries, then started setting up for the day. While Santa was digging through his sleigh looking for his gear, we began drilling holes. A few minutes later Santa found his auger. “Hey guys, if you want to fish together, I can start drilling the holes,” he shouted.

“You’re a little late big guy,” joked Keith. “I just drilled the last one.” Santa looked over the frozen lake in amazement. Sure enough, it looked like Swiss cheese with dozens of holes. “I don’t get it,” he said. “I never heard you start the drill.” 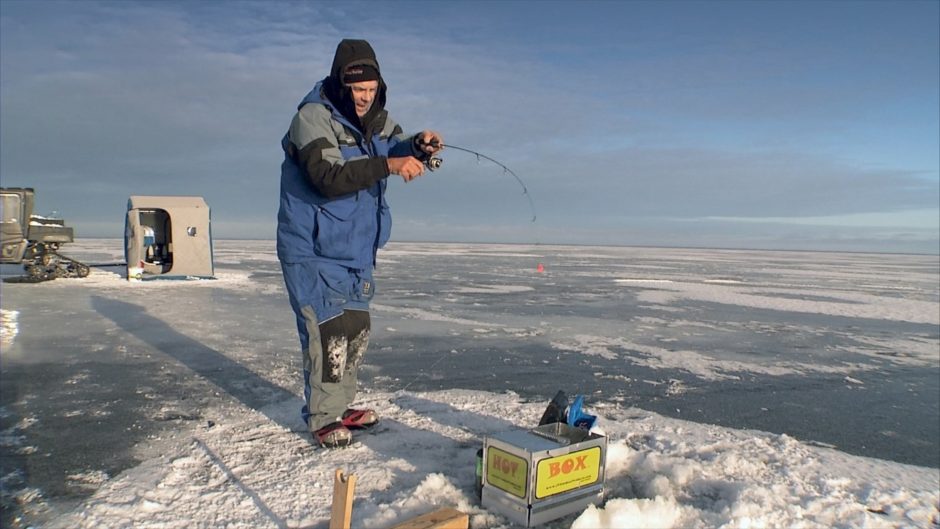 With the Hot Box, the operator can effectively fish day or night in an extended area beyond the comforts of the fish house, cabin, vehicle or any space the fisherman is occupying.

“That’s because I’m using the new ION X,” Keith replied. Santa came over for a closer look at the green auger. He couldn’t believe that a battery-powered auger had just drilled that many holes, and learned it can drill up to 1600 inches on one charge! Plus, with no gas or fumes, Santa realized it would be great for use inside his permanent ice house at the North Pole. Weighing only 22lbs, it is easy to carry and it has a reverse feature that cleans out the holes! No more bending and scooping!

His attention then turned to Gary, who had set up the Clam X200 Thermal shack. The first thing he noticed when he stepped inside was the 82” center height. Not only was this shack spacious, but there was also plenty of room to lift the rod to set the hook. The gray plastic tub made it easy to see the gear, while the full thermal tent retained heat and reduced condensation.

He took a seat next to Gary and began to swivel around with his feet in the air, “I need these for my sleigh!”

“Oh boy,” Gary thought to himself as he watched Santa acting like a little kid.

“It is the ice fishing version of the HydroWave that you see all the bass guys using. It emits sounds that communicate with the lateral line of the fish that imitate the sound of predatory fish engaged in feeding, which attracts other fish.” 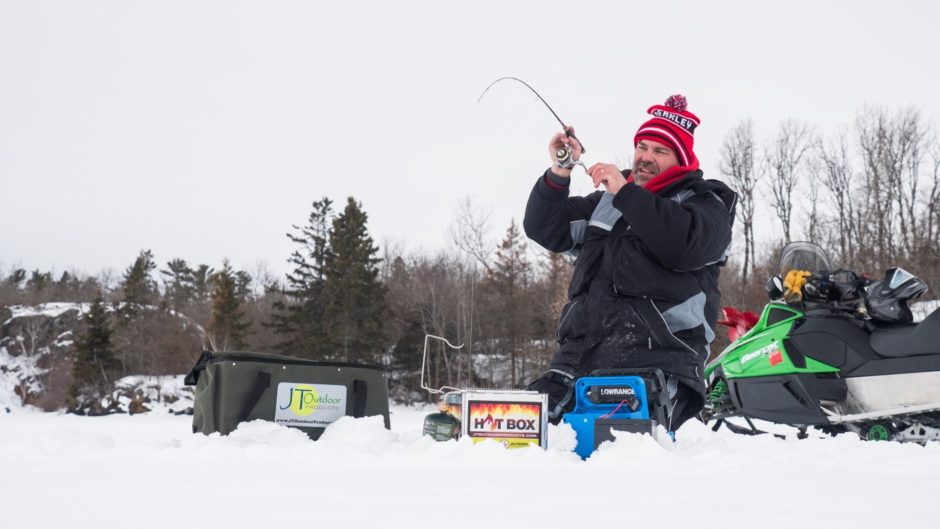 The Hot Box can also be used to keep the hole open for the angler to directly jig into.

Gary explained that many walleye fishermen are also using the new HydroWave Walleye H2 Electronic Fishing Simulator on open water, especially when they are casting. It has nine sound patterns that can be played at varied intervals, such as Shad Passive, Frenzy, Schooling and Spawning; Perch Passive, Bedding, and Frenzy; and Crawfish Passive and Frenzy.

“That’s cool! What other new stuff are the walleye guys using?”

“Well Santa, Cisco Fishing Systems has come out with a new rod holder with a slot for a spinning reel. There is also a notch on the top end for you to rest your line counting or bait casting reels in. Not only do the rods stick out less, but it keeps the reels pointed upright.”

Santa then looked out the window of the Clam X200. “Hey, what is Keith doing out there with that metal box?”

“He is setting up the JT Outdoor Products HotBox with the Snare Rod. I think you should check it out.”

So Santa skipped, well the best that Santa can skip, over to Keith to see what this was all about. He learned that it is a heated aluminum box that keeps holes open up to 20 degrees below zero. When it is paired with a 36” JT Outdoor Products Dead Stick Snare Rod, he can fight walleyes standing up. The Snare Rod is made from high-grade fiberglass with an integral Nitinol (an alloy blend of nickel and titanium) spring bobber that is virtually indestructible and kink resistant.

When a fish grabs the bait, the spring bobber and rod loads the fish. As the fish begins to feel this tension, it reacts by trying to swim away, which in turn puts further load on the rod. As a result, the fish end up setting the hook themselves!

Suddenly there was whooping and hollering coming from Gary in the Clam. “You guys each owe me a dollar! I caught the first fish!” 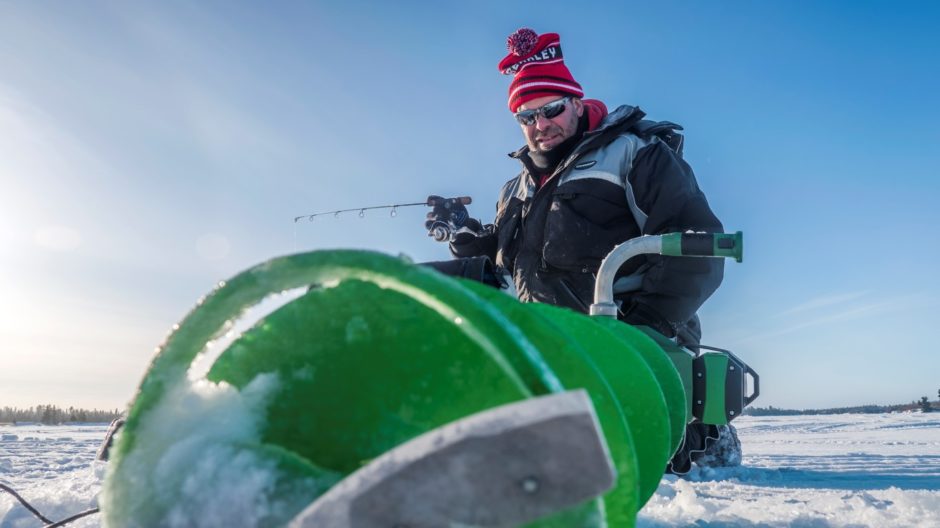 Of course, Keith wanted to know right away what Gary caught it on. “I got it on the Kemos Katcher.”

Santa was very curious to know what a Kemos Katcher could be. He didn’t have to ask though, as Keith just made a mad dash for his tackle tray.

“We use Shiver Minnows in both the winter and summer,” Keith told Santa. “We just change out the ice fishing treble hook to a Mustad UltraPoint Triple Grip for the summer. And if you are looking for some other lures to stuff in stockings, there are some new Berkley Flicker Minnow Pro Flash colors. Some of my favorites are Ghost, Green Crush and Purple Candy.  The 5cm size is a favorite for casting.”

“Wow, I’ll have to check those out! What kinds of jigs do you like? Those make great stocking stuffers too.”

“Well, the jig we choose depends on how we are going to use it,” said Keith. “The Mustad WL746 Walleye Elite Jig has a round head with an UltraPoint hook that remains sharp, even after fishing rocks. It has a longer than normal size hook that allows it to come out of the back of a Berkley Gulp Minnow in the perfect spot.”

“Well, what about when you are casting live minnows?” Santa asked.

“That is when we go to the Bass Pro Shops XPS Walleye Angler Meteor Jigs. They are great for casting fatheads. The hook-gap is perfect for this type of fishing, with a high hooking percentage,” Keith said.

Santa looked to the sky. “Ugh, it looks like a storm is coming. That means I’m going to have a bumpy ride home with turbulence.”

Keith told him he should install some WavePro Boat Air Suspension Seat Pedestals in his sleigh. An extremely easy to adjust air chamber provides a bottomless feel that caters to a wide range of rider weights.  Plus, it has a great hydraulic shock absorber, making for a comfortable ride. Santa thought that sounded like a great solution to his problem.

“Hey, speaking of things that can get banged-up in rough conditions, how do you stabilize your bow mount trolling motor?” 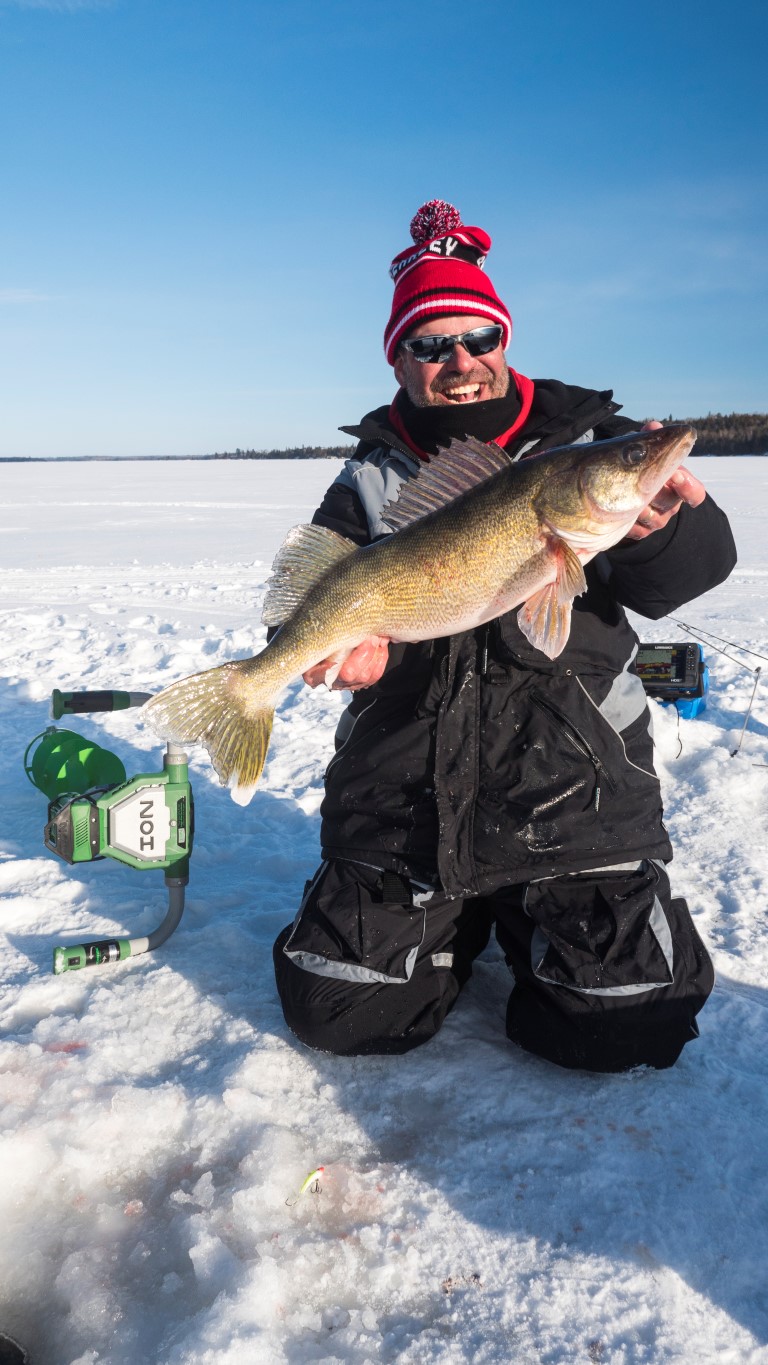 A day spent on the ice is never a waste of time!

“We use the Cisco Trolling Stabilizer Mount,” answered Keith. “It eliminates vibrations and bouncing of the trolling arm when cruising and safely secures it in waves. This product is extremely versatile, adjusting to any angle and height needed to fit any rig just right.”

He also recommended that Santa check out the TH Marine Eliminator Prop Nut for his trolling motor. Not only does it stabilize the prop by providing a larger contact point, it also acts as a heat sink and has built-in cooling ports that reduce the operating temperature for longer battery and trolling motor life.

Once again there was commotion coming from the Clam. “Ha! Got another one! So I have first fish, biggest fish and most fish. Looks like both of you are going to owe me three dollars,” hollered Gary.

Santa turned to Keith and said, “Yeah, I left my wallet at home. I better get out of here before he tries to collect!”

With that, he hopped in his sleigh and headed back to the North Pole full of new ideas for presents to leave under trees this year, along with tips to get his own Next Bite!