By Gary Parsons and Keith Kavajecz

It’s hot and the bite’s not. Are you sure about that? Many people think that walleyes become hard to catch in July and August. This isn’t true. The walleye aren’t harder to catch, they have just changed their feeding patterns and you need to adjust to them.

By this time of year the open water basin bite has begun to occur. On Lake Erie this bite is already happening in April. On many inland lakes it begins in late June and is in full swing by the beginning of July. 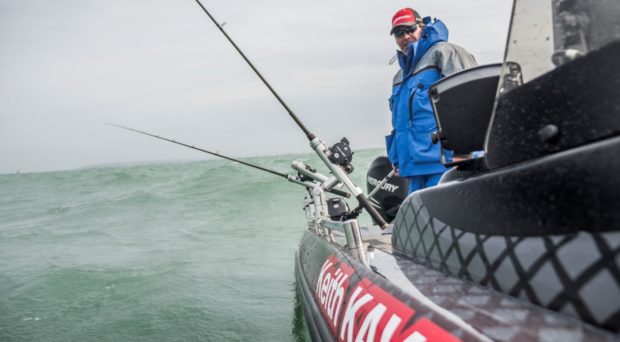 With the scroll speed set on the HDS at two times normal and the ping speed set at maximum, unless the fish are tight to the bottom, they are easy to find.

Early in the season, walleye tend to relate to structure and shorelines. As the water temperature changes and bug hatches occur, or as smelt and alewives begin to school up, the walleye begin to roam the open water basins.

The first thing we do when we go to a lake this time of year is look at a map. A prime area to concentrate on is a 25-30 foot flat. The flat could be sand or mud, which is the perfect place for insects to hatch, so a lot of baitfish will be in the area. While a lot of people tend to think of mayflies when they think of a bug hatch, there are actually various hatches happening throughout the summer. These same flats can also hold an abundance of red worms and wigglers.

Another key feature to look for is a basin that has a smattering of underwater humps. The fish like to relate to these humps, usually staying within a quarter mile of them during the day and feeding on them at night.

Once we have identified areas to target, we use our Lowrance HDS to look for suspended schools. A huge advantage of the HDS is the ability to pick up on these schools while cruising at 18-19 mph, instead of having to slow down to trolling speed. With the scroll speed set on the HDS at two times normal and the ping speed set at maximum, unless the fish are tight to the bottom, they are easy to find. 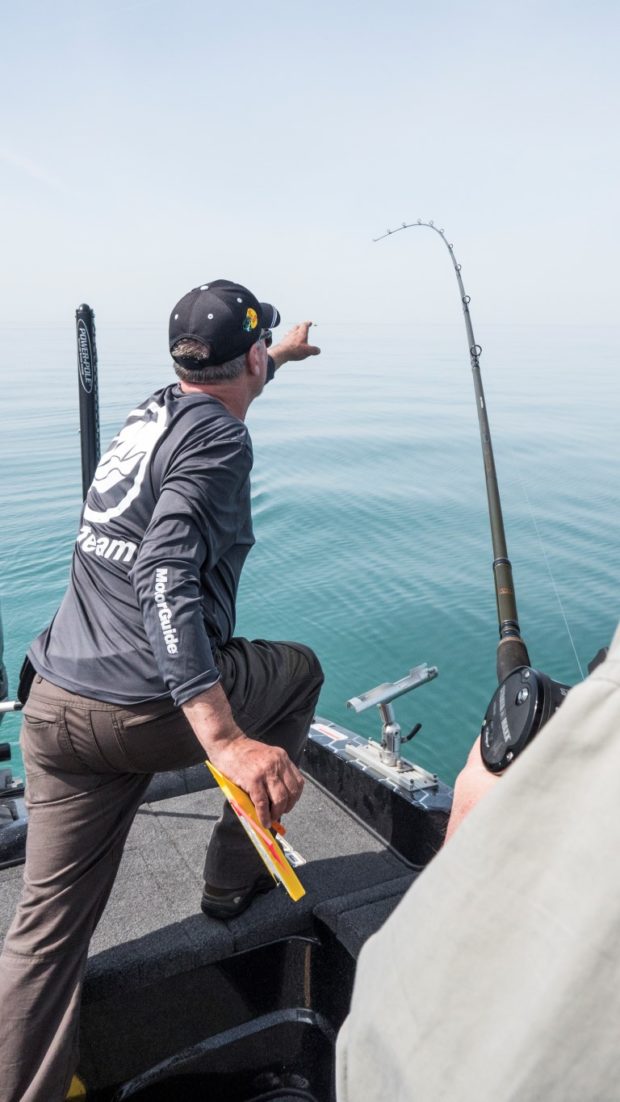 After you have worked hard to locate the fish, get them to bite, and keep them on the line, the last thing you want to do is lose them at the boat.

There are a couple of ways to fish these flats. It is important to understand that these fish are wandering nomads. The fish you find today could be a couple hundred yards, a half-mile, or clear across the lake tomorrow.

Structure is not as important when deciding if you should chase after open water basin walleyes as weather is. Very high winds seem to turn these fish “off”, especially when a N or NE wind pushes a cold front through. Yet when the weather is stable it is lights out!

If we are looking to cover water, we tend to lean towards cranks over spinners because of their specialized actions. If you have a good crankbait, you can get a good bite in most conditions. Traditionally, the thought has been to use crankbaits until the water gets warm and then switch over to spinners. This line of thinking has changed with the introduction of cranks like the Berkley Flicker Minnow and Flicker Shad.

One of the biggest mistakes people make when they are trolling warm water is trolling fast. Boat speed should not be predicated on the temperature of the water, but the crank and the action of that crank. While some people think 2 mph is a great trolling speed, we have found it can be too fast for some cranks. There are many cranks that have a great trolling speed of 1 mph. You should constantly be changing your trolling speed to get the best action for your bait. In many cases you can troll spinners and cranks together.

The beauty of this kind of fishing is unlimited flexibility and experimentation. If you are bored trolling then you are not doing your job as an angler. You should constantly be mixing up your speeds and your bait until you find what trips their trigger. We love it when we are fishing in a state where we can use several lines, as it gives us an even greater opportunity to experiment.

We lean heavily on Berkley baits because we have had a hand in their design. We don’t prejudge, we let the walleye tell us if they will work and keep playing around with the action until it is right.

The absolute epitome of a day is when you have dialed it in so well that you have all of the lines running with the exact same lure in terms of brand, size and color.

Just as important as selecting the right bait and speed is the proper planer board selection. Not a lot has changed over the years with Offshore planer boards. They have a very heavy ballasted system that allows you to troll slow without the boards tipping. They are also great for handling rough conditions.

We like to modify the clip set-up on the boards when trolling crankbaits to what we call “The Pro Set-Up”. We remove the release hardware and the OR16 (Red) release from the back of the board. The board comes from the factory with an OR19 (Orange) release that is mounted straight out on the arm and we add another OR19 just behind that one so it’s aimed back at about a 45 degree angle (the board comes with a pre-drilled hole for this modification).

The advantage to the “Pro Set-Up” are that it makes the boards easier to read because they will “tip back” more when a fish is on.  It also makes removing the boards easy, especially when you are fighting a fish by yourself.

When we are trolling spinners we always use an Offshore board equipped with a Tattle Flag. There are way too many instances when we are able to tease a walleye into biting with a Tattle set-up, in which the flag moves when you have a strike.

There are many times when you will see that the fish bit the worm, but then let it go. When the flag indicates this, you should free spool your line, count to three and then tighten up. Usually the fish will slam it! We don’t know of any other board that will let you see those light strikes. 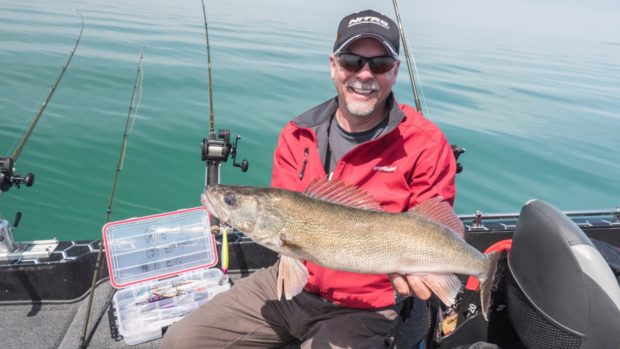 Whenever you can, you should build stretch into your trolling system, whether you are trolling spinners or cranks.

Keeping the Fish On

Whenever you can, you should build stretch into your trolling system, whether you are trolling spinners or cranks. For years we have used monofilament 10# Berkley XT line because it allows the fish to suck it in better and there is a lot of forgiveness in the line. This minimizes the chance of putting a hole in the mouth of fish. It also minimizes the chance of losing a big fish on a headshake.

We have also begun using 14# Berkley XL when trolling. It is tough as nails, has more stretch than XT and is the same diameter at 10# XT.

We refer to the Precision Trolling app to know how much line needs to be let out for our lure to run at a desired depth in the water column. The calculations for the 10# XT are the same for the 14# XL.

If you are trolling with lead core line, it is important to keep the drag somewhat loose since you will have stretch limitations. This prevents the fish from ripping a hole in his mouth.

After you have worked hard to locate the fish, get them to bite, and keep them on the line, the last thing you want to do is lose them at the boat. One of the biggest mistakes we see are people losing fish just out of netting range with the pole pointed straight up to the good Lord in the sky.

As soon as you get the board off, put the rod close to the water at a right angle to the fish. You don’t want the fish to come close to the surface until it is within good netting range. By keeping the rod down and at this angle, you should hardly ever have to reach out to net a fish.

So remember, don’t give up when you think the fish have shut down! With a little bit of homework and experimentation you will be able to land your Next Bite! 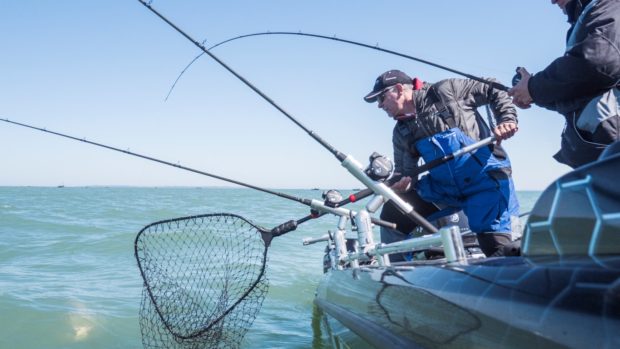 One of the biggest mistakes people make when they are trolling warm water is trolling fast.