A couple years back the “Slow Death” tactic for rigging walleyes really took off with the introduction of the Mustad Slow Death Hooks. The presentation had been used by a select group of anglers out west for some time, but until we helped Mustad Hooks develop a hook that anglers could use right out of the package, it was not a widely utilized technique.

If you are not familiar with the Slow Death rigging phenomena (where have you been), it’s a type of bait rigging using a half a night crawler threaded on a specially bent log-shank hook that when pulled behind a bottom bouncer or similar weighting system, gives the bait an enticing spinning action walleyes find tough to resist. It’s a tactic best suited for situations where conventional live bait rigging is just too slow and the ever-popular bottom bouncer and spinner rig is just not getting the attention from the fish you’re looking for. Slow Death allows you to cover water with a finesse technique that triggers bites. It’s deadly to say the least. So deadly in fact, that hook companies across the board have been coming out with their own versions. Must be true what they say, “Imitation is the sincerest form of flattery”. But even with all these hooks to choose from, they all have their limitations.

There are times when walleyes will prefer a larger offering than the half crawler used with Slow Death, and if you try to use a full crawler with those hooks, you won’t get the enticing ‘spin’ that triggers the bites. Plus, most all the hooks designed for the Slow Death tactic are pretty light wire, and if you hook a big aggressive fish the hooks can straighten out if you put too much pressure on them.

So we went back to our friends at Mustad and with some diligent R&D we helped develop the new Mustad Super Death Hook (model 33863NP-BN). The new Super Death Hook has some key advantages; the more aggressive bend in the shank allows this hook to spin not only half crawlers, but full crawlers, as well as artificial tails with deadly effectiveness. The Super Death Hook is also made of a heavier gauge wire which means it will stand up to the fight of bigger fish. 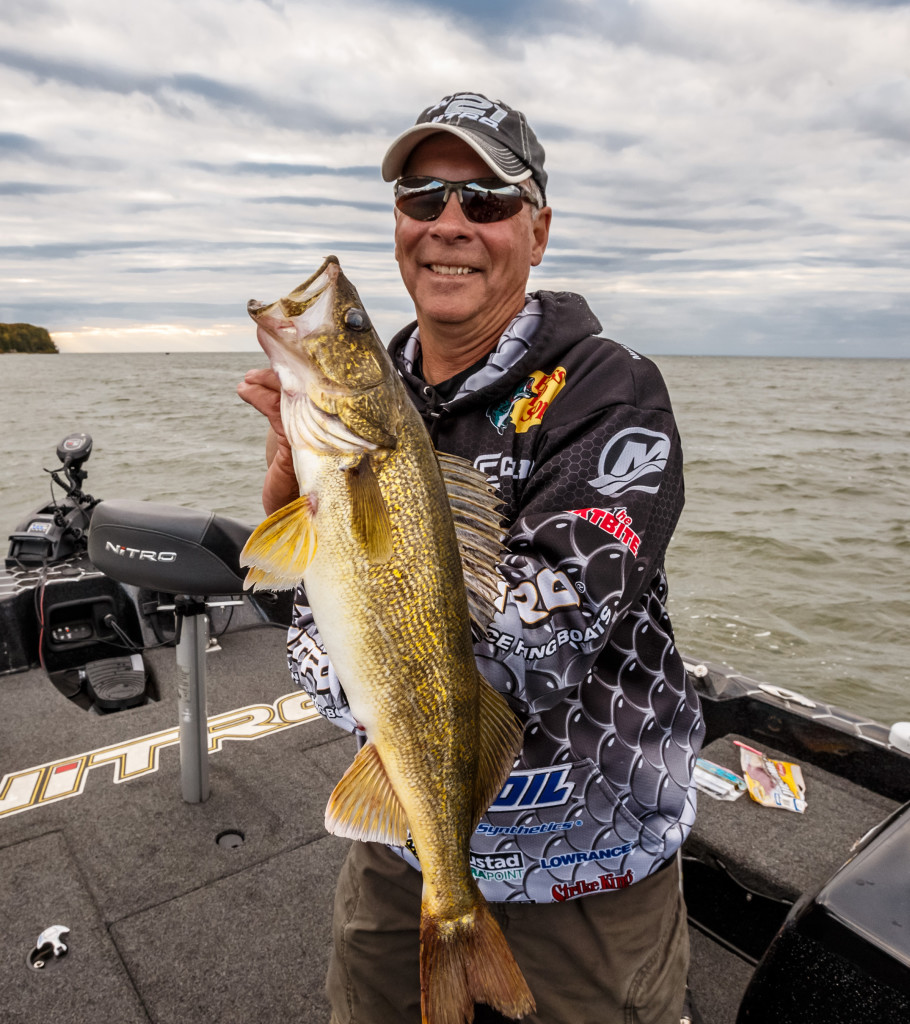 Gary with a Walleye:
Slow Death Rigging continues to gain a following among walleye anglers because it catches fish in a wide variety of situations and Mustad’s new Super Death Hook makes the technique much more versatile.

As mentioned, full length crawlers are great on these hooks, but as more and more walleye anglers experiment with fishing artificials, we wanted to make sure that these hooks would put out the same great action with fake baits as they do with the real deal. A few of our favorite contenders for top catchers to use with the Mustad Super Death Hooks are the Berkley GULP! Killer Crawler, the GULP! 3 inch Fry and the GULP” 4 inch Crawler. The Killer Crawler is by far the most life-like in the water and is a great bait to have handy in those situations where you can’t get live crawlers or run out. The GULP” 3 inch Fry has been a favorite of ours to use on jigs since it came out, but it has proven itself on the Super Death Hooks too, giving a little faster and wider “swing” than other baits. If the walleyes are looking for a slower – lazier action, the GULP! 4 inch crawler delivers in spades. It’s a deadly tail on the Super Death Hook!

So you may be wondering where and in what situations would Super Death be effective? Honestly, any place you would rig for walleyes you can use this tactic and we would bet a bucket full of crankbaits that you would catch more fish more effectively using Super Death over conventional rigging methods.

As an example, Gary recently shot a TV episode for The Next Bite with our good friend Korey Sprengel on Minnesota’s famed Leech Lake, a lake like many Minnesota lakes that has traditionally been a live bait rigging body of water. The filming took place in mid-June following a major professional tournament event so the walleyes had been harassed pretty well for over a week. Not the most ideal of conditions for getting some good fish for the camera. But cruising the lake’s key structures with his electronics Gary was able to isolate a few good looking groups of fish relating to rock structures with sharp-breaking sides – ideal conditions for a rigging presentation.

By using the Super Death hooks on bottom bouncer rigs, the crew was able to boat several nice fish including a couple real dandies that will look awesome on next season’s episode of TNB! The key to this successful fishing was the fact that Gary could cover the structure more quickly and efficiently with the Super Death Rig than he could have with a conventional live bait rig, allowing them to contact the more active fish along the structure in a shorter amount of time. That helped them to dial in on the best fishing spots and fine tune the presentation, learning in short order that the fish were much more apt to bite a full crawler on the rig than they were a half crawler or any other offering.

Like any other technique, the right gear is also a key component to success. Ideal bottom bouncer rods will typically be baitcasting outfits in the 7 foot range. Bass Pro Shops’ Walleye Angler Series model WL70BBHT is designed specifically for this type of tactic and teamed with a quality reel spooled with 10# test Berkley Trilene XT it’s an ideal outfit for this type of fishing. Tie on a bottom bouncer to match the depth you’re fishing and run a four foot leader of Berkley Trilene 100% Professional Grade Fluorocarbon to the Mustad Super Death Hook and you have a deadly walleye fishing weapon.

The Slow Death technique continues to gain a following among walleye anglers because it catches fish in a wide variety of situations and is a relatively easy method of fishing to master. Since the tactic has become so popular, there are several hooks on the market that claim to be “the one”, but the Mustad Super Death Hook supersedes all of them, and does it all. It will spin most any bait you rig on it and its strong enough to land the big ones. Add this technique to your arsenal and you’ll be amazed how quickly you get your Next Bite.

If you have questions or comments on this or other articles from Gary Parsons and Keith Kavajecz, visit their website www.thenextbite.com. HGWP