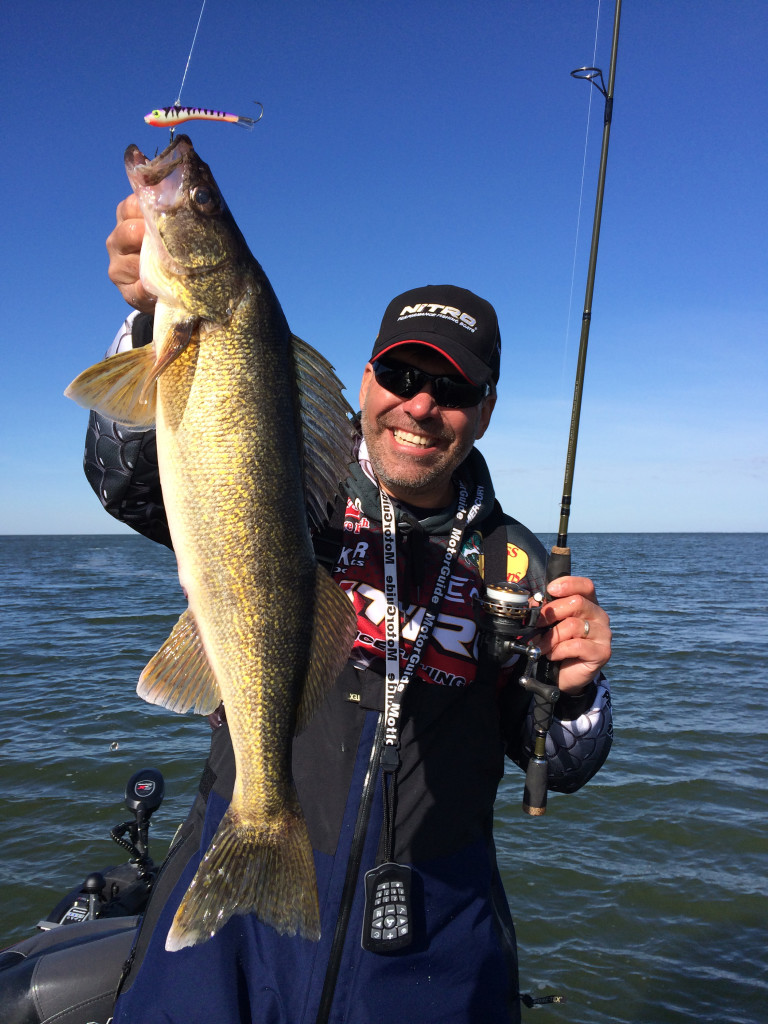 If there is one thing we have learned in all our years of walleye fishing it’s that the right action catches fish and not all baits have it.

If you’ve been walleye fishing for any amount of time, you no doubt have developed that little voice in your head – you know the one – the one that tells you to move to a new spot when the fish aren’t biting where you are at the moment. That voice that whispers to you “try the Firetiger one, it worked on that other lake so it should work here”. We all have it. Do you listen to your little voice?

Last summer while preparing for a NWT tournament on Green Bay, Gary’s little voice was talking to him … persistently. Green Bay, like most other Great Lakes fisheries, tended to be a trolling bite, but we, as well as a few other anglers, were always looking at ways to target the walleyes that were set up on structure on these vast bodies of water; some way that did not involve trolling. We wanted a more precise approach to catching these fish. Gary’s voice kept telling him there was a better way; better than rigging, or conventional jigging presentations.

Known primarily as a “trolling bite” fishery, the walleyes of Lake Michigan’s “north end” are notorious for being tough to catch when the winds lay down in the summer months. Most of the walleyes there relate to structure like humps and breaks, and because of the clear water tend to be finicky unless you have a good chop on the surface. We knew there had to be a better tactic than trolling to reach these fish and Gary’s little voice kept telling him it had to be a jigging-type technique – just not your typical one. There was a tactic we had never used here before, but that had some success in other areas of the country and that was to use ice-fishing style jigging minnow lures on open water structures. In his internet researching, Gary had found a bait that resembled the popular Jigging Rapala that many anglers were using for this tactic, but one that he had a gut feeling would have the action he was looking for to trigger more bites. What he found was the Moonshine Shiver Minnow. A lure produced by a very small company in Michigan’s U.P. that before now was basically only known as a small “garage-operation” ice fishing lure company.

If there is one thing we have learned in all our years of walleye fishing it’s that the right action catches fish and not all baits have it. The Moonshine Shiver Minnow’s action is very different from the Jigging Rap. This horizontal-minnow-like jigging lure has a unique minnow shape and fan tail that give the lure an enticing action as it swings off to the side on the up-stroke and smoothly glides back down on the free-fall. That really is the key to its effectiveness. We tried quite a few variations and we threw some Jigging Raps, too, we’ll admit it. But they weren’t even close to the Shiver Minnow in producing hits.

The tactic worked well for us as we ended up taking the two top spots in the event (Keith 1st, Gary 2nd). While we dialed in this presentation for the upper reaches of Green Bay in summer, it has proven to be a deadly tactic in many situations where walleyes are relating to structure from late spring right through fall. Here. We’ll delve into this technique so that you can add this to your walleye bag of tricks this season.

Of course, using the right lure doesn’t help if you are not on fish. It’s a great tactic for “milk-runs”. We establish these runs by running around different structure elements graphing for fish with our Lowrance HDS12 Gen 2 units. When a fish is marked, we scroll back on sonar and put a weigh point right on that marked fish, then move upwind if we are in rough conditions or to the side in calm conditions and cast to those individual fish. It’s simply a more efficient way to target these walleyes than trying to troll for them. It allows you to target individual fish or small pods of fish on these structures rather than spending time setting up trolling passes to try and contact them.

As with any tactic, precise boat control plays a huge role in success. We like to utilize the Key Fob control for our MotorGuide Xi5 bowmount trolling motors and once we are positioned, set the motor in “Anchor Mode” to hold the boat in place. That has honestly become one of our favorite features of the Xi5, as once you set the Anchor Mode, the motor will work on its own to hold your position, whether you’re in 4 foot rollers or calm water. And the key fob makes making small adjustments to your position effortless, allowing you to “jog” slightly in any direction with the touch of a button.

Once you are positioned on the fish, then it’s time to get down to business. Moonshine Lures’ Shiver Minnows come in a handful of sizes, with the #3 being our go-to size for this tactic. The cadence you use to work the baits is key! To get the most from the bait, work it close to bottom without hitting bottom too much. You want to sweep the rod up 3 foot – almost to the point of snapping it up. That makes the lure dart to one side. Then immediately drop the rod tip to give it slack and let the bait glide as you reeled in the slack line. Then, just before the lure hits bottom, you repeat the cadence. Most bites will come on the drop when there is slack in the line, so as you go to make his next pull, you’ll feel weight – set the hook hard.

Fine-tuning the lures will also pay big dividends. Replace the small “ice” treble on the belly of the lure with a #4 Mustad KVD Elite Triple Grip Treble (model TG58BN). This gives the bait a bigger “bite” for better hooking and the inward bend of the Triple Grip help keep fish on. In general “glide” lures like these are heavy and not the best hooking lures because the heavy body can be more easily thrown during a long fight. A second advantage is that with the inward bend the Triple Grips seemed to pick up less moss and fewer Zebra Mussels when the baits do hit bottom.

As for rigging up for this presentation, we like using spinning gear rigged with a bright colored main line like 8 pound test Berkley Nanofil in Hi-Vis Chartreuse, in order to better help see when the bait makes bottom contact. The no-stretch of this line also gives it the sensitivity to feel everything the lure comes in contact with as well as making long-distance hook-sets more productive. In our experience, walleyes caught using this tactic hit and fight really hard so a strong line like Nanofil was crucial. Nanofil is also really thin so it reduces the amount of loop in the line when fishing in the wind. To help cut down on visibility and add some protection from Zebra Mussels, rocks, etc., we suggest adding a 3 foot leader from the main line to the lure of 10 pound test Berkley Trilene 100% Fluorocarbon.

This experience with the “Shivering” technique and our dominating last year’s NWT event on Green Bay using it shows the importance of tournament angling to the fishing industry. The guy that owns Moonshine Lures is going to have his life change because of this. We also believe strongly that this is going to change Great Lakes structure fishing forever. The people that say there is no innovation in walleye fishing are dead wrong. You can never stop innovating and never stop learning in this sport, and never stop listening to that “little voice” in your head … that’s what will help get you The Next Bite.