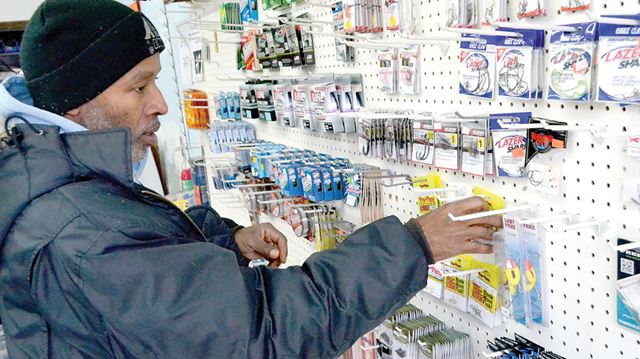 SCUGOG — Ryan Lord, of Causeway Live Bait in Port Perry, stocked up his merchandise ahead of the upcoming ice-fishing season. The Province announced on November 27 that it will impose a year-round walleye fishing moratorium on Lake Scugog, starting January 1, 2016. December 1, 2015

The Ministry of Natural Resources and Forestry announced Nov. 27 that it will implement a full fishing ban for walleye in 2016 with the goal of spurring the species to reproduce and protecting the remaining fish. The MNRF stated the ban would be in place “until further notice” and did not say when it hopes to reopen Lake Scugog’s walleye fishery.

Earlier this spring, the Province floated the possibility of either a full, year-round closure or seasonal restrictions (no walleye fishing in the summer or winter) as potential ways to help the species rebound in Lake Scugog.

There have been no other changes to fishing regulations on Lake Scugog and other fish species will remain open to recreational angling under the current rules.

“Our fisheries assessment data shows the walleye population in Lake Scugog is in decline,” said Peter Mabee, an MNRF resources management supervisor, explaining the decision. “This is due to a number of factors, including overharvest, low recruitment (young fish entering the fishery) and changes within the fish community.”