What do ice fishing for walleyes and football have common? A lot!

Think of yourself as a quarterback. The first thing the QB needs to be able to do after coming out of the huddle is read the defensive. Second you have to figure out if the play called needs adjustments or if a whole new play needs to be audibled.

On the ice, it is important to know how to read your electronics to help read the fish. We prefer a LCD type unit like the Lowrance LCD Elite 5 or 7 (or HDS 5 or 7). With an LCD, you are able to tell the attitude of the fish when it comes in your hole. 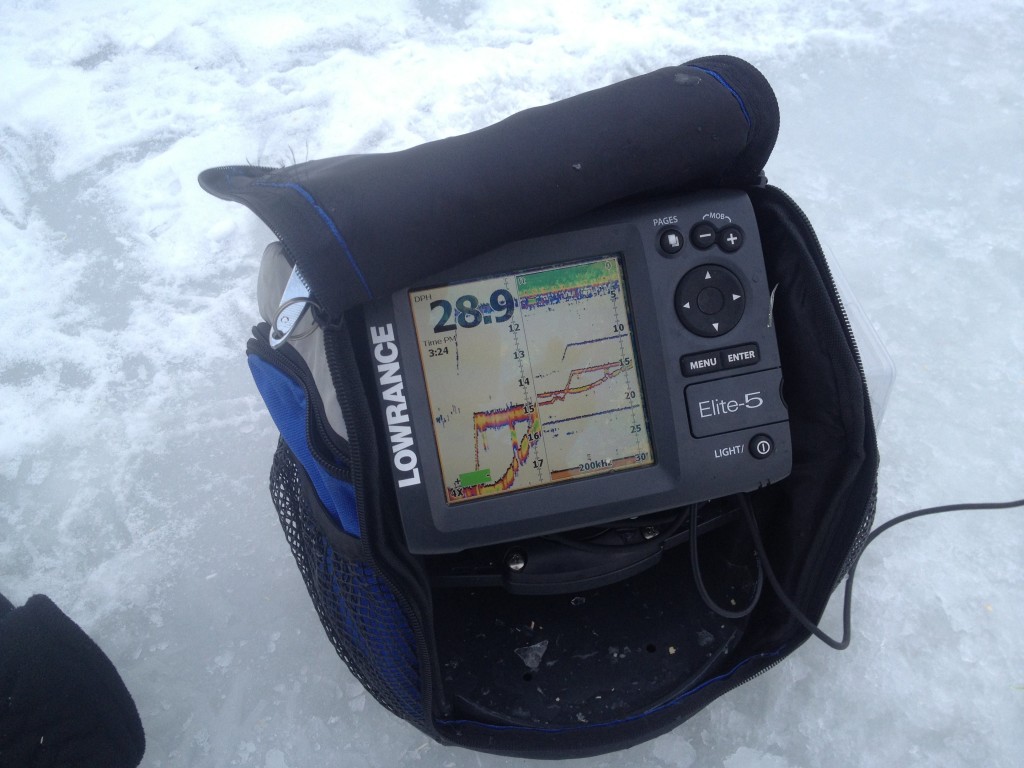 Powerful fishfinder functionality, precision GPS chartplotter features and a high-quality 5 in./12.7 cm color display – all in a well-priced package.

Any change you see on the graph will be either the fish or bait. The yellow are with a thin blue line above it that you see on your screen is the bottom. Pay particular attention to the blue line. It will begin to thicken as the fish comes in. As the fish gets closer to your hole, the widened blue line will split and become a new line. Bigger fish will cause this new blue line to also show some yellow or red.

The picture drawn on an LCD screen is like that quarterback reading the defense. If the blue line slowly widens and then shrinks it means that the fish is just meandering through transducer “cone” – probably not to aggressive. If the second line splits quickly or just appears, that fish is actively feeding. Based on this “mood” you might have to do different things to trigger a bite.

To increase your chances of success on the ice you need to have a good playbook. Most of the time this “play” will consist of two things. The first is a cadence to draw in the fish and the second is a cadence to make them bite.

The common jigging actions to draw fish in are the “lift and flutter” (a cadence that will work on a spoon or a jig) and the “lift and glide” which works on glide baits such as a Shiver Minnow. The key on both of these is to pop the jig up then give a little slack lack so the lure can flutter or glide back. 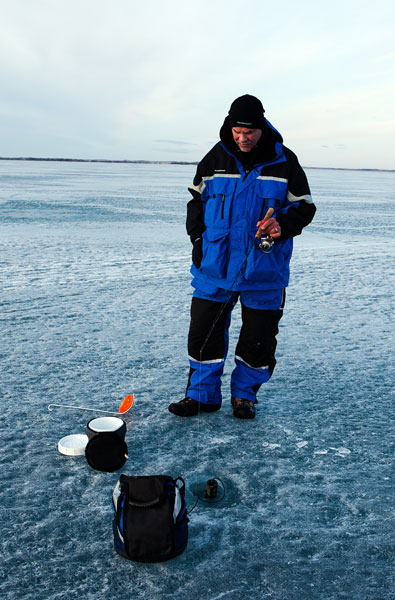 The Lowrance Elite 5 is a good choice for ice fishermen. When you are jigging you can watch the sonar screen and when you decide to move to another spot, you can switch over to the GPS screen!

We are often asked how far the bait should be lifted. That depends on the mood of the fish. You can lift six inches or two feet. Watch the fish finder to see if the fish are coming in to know what they want. If they aren’t coming, you need to call an audible and change what you are doing to attract them to the hole.

The appearance of the lure also important in attracting fish to the hole. We like flashiness, such as a metallic spoon or jig. In low light conditions bright is also good. Try using a lure that glows in the dark as they fall they will show different color or flash patterns.  Also consider baits that are color-contrasting from front to back, such as a chrome/color pattern or glow/color pattern, which makes them look like they are flickering or flashing as they fall.

One thing most people don’t think about is attracting the fish on the lift. If you are using a glide bait like the Shiver Minnow, the fin on the bait will make it jump to the side of the hole on the lift. The #2 Shiver Minnow will sweep or jump a foot or more from the hole in any direction. This horizontal movement is not typical for most baits – plus you get the added attraction of the bait turning around and gliding back. Change in directions can often fire up fish.

A second set of baits that will jump to the side on the way up are thin metal spoons with the correct shape, such as the Acme Sidewinder, VMC Tingler Spoon or the KenKatch Slim Slam. The Sidewinder has the least aggressive swing, while the Swim Slam has the most action. The Tingler Spoon falls in between. Again, by jumping to the side you get action out of the whole – plus the flutter down has more distance to travel. 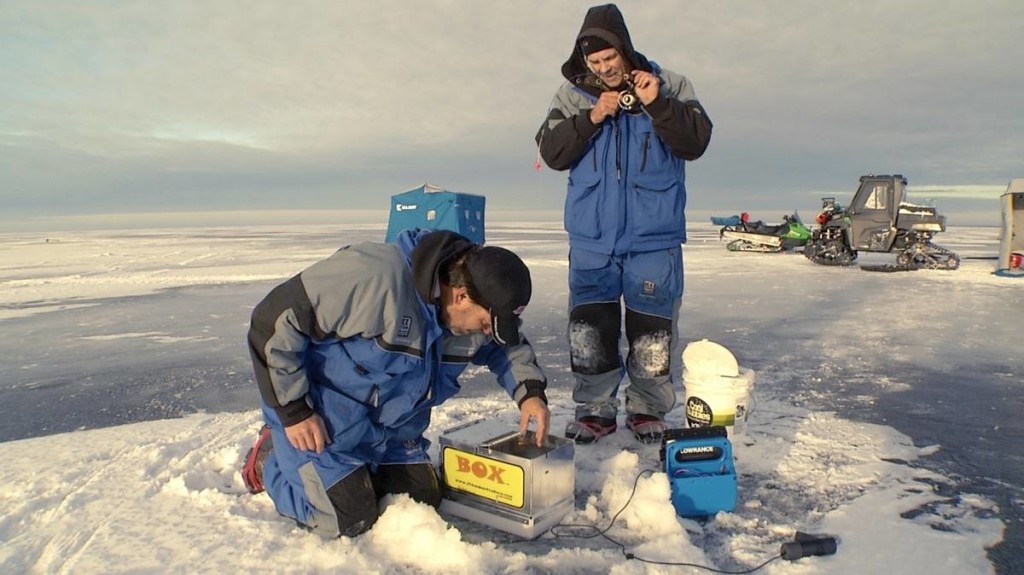 The Hot Box has new lamps and can now keep your fishing hole open for 30 hours on a 1 pound cylinder. Great for those long ice fishing weekends!

A rattle can also help attract fish to your bait. Lures like the new Clam Rattlin Blade Spoon have a couple of balls in the rattle chamber that bounce freely. High pitched rattles are a known attractor to get the walleyes to look at the bait.

Sometimes you’ll get lucky and the fish will be attracted to the bait and just bite it – perfect! But more often than not, you’ll need to change your cadence to trigger a bite.

One of the most obvious changes that can trigger a bite is just letting the lure sit still, especially if it is tipped with a minnow head or a fine plastic. Often the current or even just your hand moving will give the bait subtle action.

If the fish mark is just hanging even with the mark indicating your lure, it is looking at the bait. The first thing to consider is to move your lure in an upward direction, which often triggers a bite right away. It’s like the quarterback scrambling out of the pocket – the D-line gets after them even more aggressively.  However, if the fish is passive, it will take a little more work to get it to take the bait.

At first consider slowly lifting away from the fish, as if your lure is trying to escape. The trick is to NOT move quickly. Simply raise the lure a foot at a time and watch your fish finder to see if the fish follows. Often this will trigger a bite because the fish feels that their meal is getting too far away. 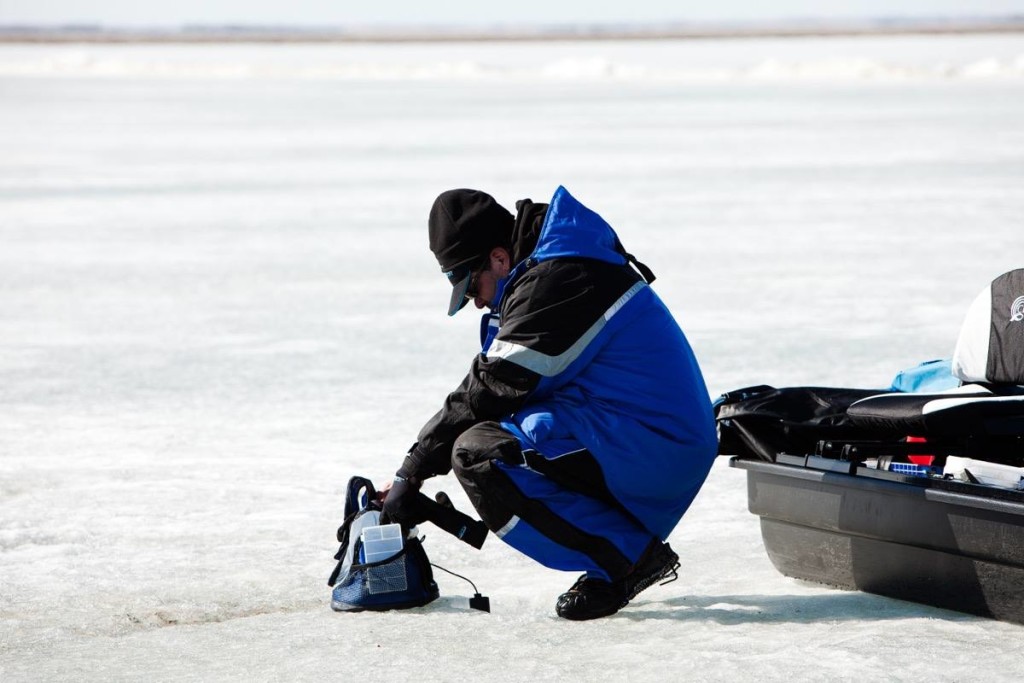 The Lowrance Elite-5 Ice Machine comes ready to hit the ice in its own carrying case, great for when fishing at multiple holes!

Next add in a small three inch hop, just enough to make it move and flutter, not dart. Lift, pause, hop can entice the fish to bite. If the fish is just staring at the lure and you hop and it swims away – don’t hop next time.

If holding still or slow rising doesn’t trigger the fish, the next cadence to try is dancing. You’ll want to get a rhythm going with the rod tip that bounces the lure in one place. This works great with a spoon and minnow head because the spoon is moving one way and the head is moving another way. You can practice this by looking down your hole. Don’t be afraid to also try a combination of dancing and lifting.

Then there is “shivering” the Shiver Minnow. Try to keep the lure in one place, but be aggressive with the pop. With the way this lure is weighted, if you are shivering correctly, it will look like it is swimming in place. This technique takes a much harder “thump, thump, thump”.  If the fish continues to show interest then add a lift to your cadence.

It is also important to pay attention to how you respond to a walleye approaching a dead rod. Since a dead rod is typically sitting still, it is the scent of the bait or the movement of the live bait that attracts the fish. We like to suspend a small jig and a minnow about a foot and a half off of bottom. You will be surprised at the number of fish that will come up and look at it but need a little encouragement to get them to bite. 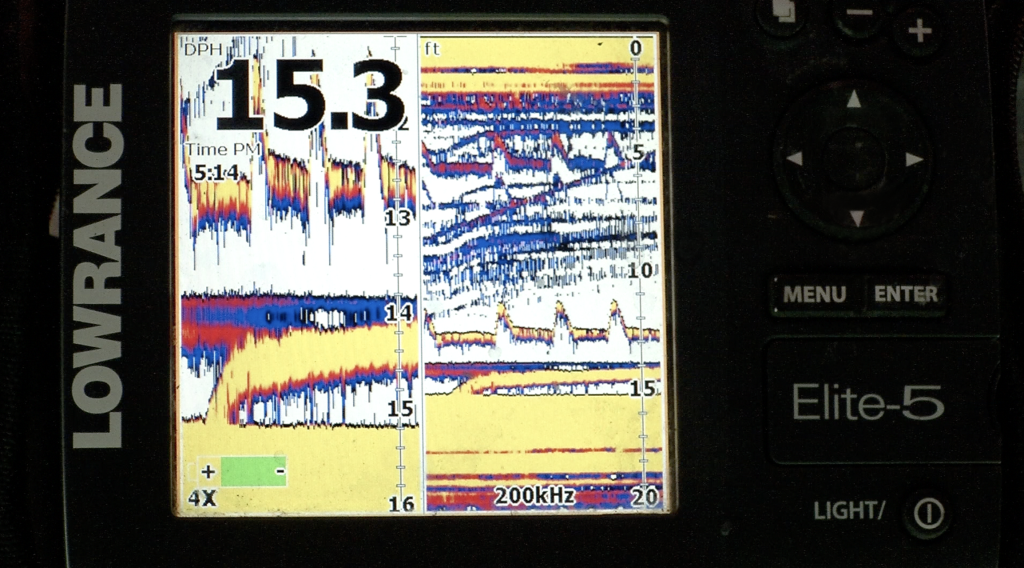 The Lowrance Elite family of fishfinders offers high-quality features at affordable prices. DownScan Imaging offers photo-like clarity when showing you what’s beneath you, helping you to more easily identify fish and structures.

You can watch fish approaching your dead rod on the same Lowrance unit that is monitoring your jig rod if both your jig rod and your dead rod are relatively close to each other. The dead rods lure will show up a line on the screen that does not move.

A second way to run the dead rod is to set up a Remote Jigging Station. This is a hole is within 20-30 feet from your shack. Often we use the heated Hot Box to keep the whole open – it also has a built in rod holder to hold the dead rod.

To see what’s happening out at this remote hole you will want a second depth finder that is zoomed in so you can keep an eye on it while you jig. Even a better solution is for this remote depth finder to have WiFi Streaming available. You can find this in the Lowrance HDS units or the new Elite Ti units. These units will stream the fishfinders stream and you can watch it in your shack with your phone or notepad.

If a fish is approaching you can run (or quickly walk) out to the remote station. Sometimes the fish will bite on its own – other times – like a dead rod in your shack – it will need to be provoked.

In either case (dead rod in the shack or remote) the first thing to try is a simple tap on the rod tip while it is still in the holder to try to trigger a bite. If that doesn’t get the bite, slowly lift the rod, make a little hop, and let it sit still. Now that the rod is in your hand, use the techniques described above to try to trigger the fish. Note, since the walleye came into the dead rod on much less action than a fish approaching a jig rod, you may have to be less aggressive with the trigger cadence.

The beauty of all of this is if a fish is near your lure or bait and swims away, you know what not to do next time. Like a quarterback, just throw the ball away, pull out your playbook and try something different next time. With a little bit of luck, practice and patience, you’ll figure out a good cadence to score The Next Bite! 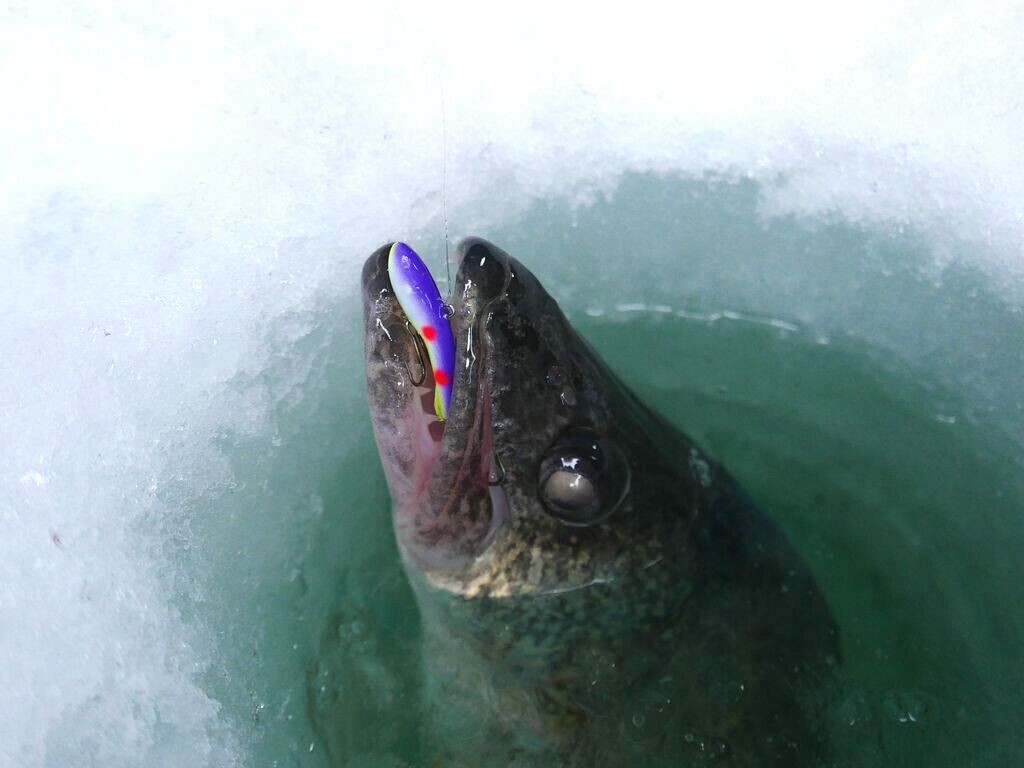