As we write this its mid-November and although the weather is unseasonably cold, predicting what ice conditions are going to be over the next month or so is only an educated guess.  When you’re talking “early ice”, much depends on where you are in the ice fishing belt and what the weather patterns have been. This year, things are looking pretty good for an early start to the ice fishing season. That means that there’s a good chance that those of you targeting walleyes will most likely be dealing with fish still looking to bulk up for winter. That means fish will be aggressive, on the move, hunting down forage. It also means that to be successful, anglers need to be aggressive, staying mobile in their search for the mother lode.

But we are talking “early ice” here, and although aggressive tactics often are the key, a healthy measure of caution is also called for. Ice conditions are unpredictable anytime, but especially in the early and later parts of the season. Chances are ice has only been forming a few weeks and in most lakes it’s probably not very thick. This is a time for travelling light.

One way we travel light is to stick with “one-man” ice shelters. You want something that is easy to pull by hand, but offers comfort and room to carry all your gear. We like the Clam Legend Thermal XL. It only weighs about 60 pounds so it’s ideal for thinner ice situations. It’s also a very comfortable shack to fish in as it features extendable poles to provide lots of head room (up to 66 inches) offering you plenty of head-room to set the hook without banging into the roof, and it’s also a great choice for taller anglers.

As for fish location, look for the walleyes to still be in or near areas where you were catching them right up until ice up. Typically that puts the fish on flats near where they will spawn come spring, or on flats along sharp drop-offs. Walleyes use these steep contours as travel routes, much the same way deer use cuts, ridges and coulees to travel through an area. Another main factor to the walleye’s location will be forage. Locate one of these prime flats areas that’s holding a good amount of forage fish and you have a prime area to start fishing. 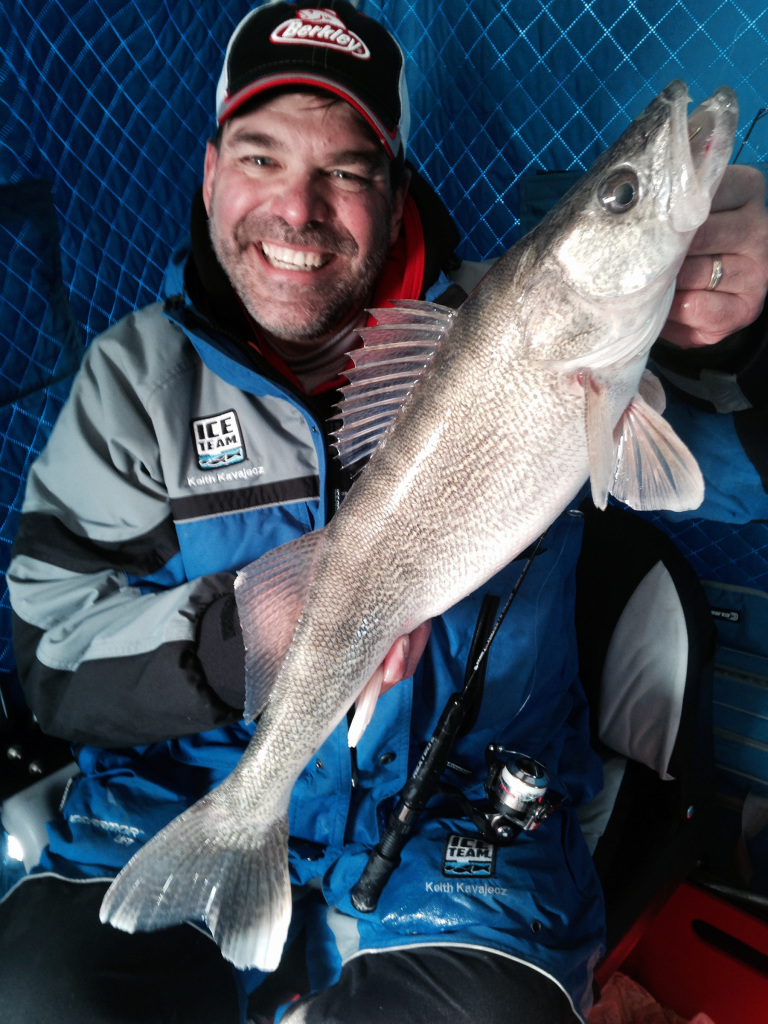 Keith Kavajecz with a walleye in ice shelter: Early ice is a good time for aggressive actions. In most cases, the walleyes are still putting on the feedbag for winter (especially in a situation where you’ve had an early freeze) and they’re typically in a more aggressive feeding mode.

Early ice is a good time for aggressive actions. In most cases, the walleyes are still putting on the feedbag for winter (especially in a situation where you’ve had an early freeze) and they’re typically in a more aggressive feeding mode. Jigging actions incorporating quick up-strokes and slack line drops are deadly early on. It’s also a good idea to pound the bottom with your jigging lure occasionally. It’s a tactic that will make a little extra noise and often creates a “puff” of silt off the bottom attracting a fish’s attention.

A trick we have used with some success when dealing with more finicky walleyes this time of year is to play a game of cat-and-mouse with them. Say you are watching a fish on your locator but the fish doesn’t bite your offering immediately. That’s a good time to begin raising the bait up aggressively – often several feet –  jiggle it and then raise it up some more (often having to reel in line). It is important to watch your depth finder to see how far and how aggressively you can try to pull the fish up and get it to bite. But this time of year pulling a walleye up 10 to 15 feet before it bites is not uncommon. It’s a trick to keep in mind that can often pay off big.

So what are the best baits to use for these “aggressive” actions? One of the most productive is what we call Glide Baits, like Moonshine Lure’s Shiver Minnow, This “minnow-like” jigging lure has a dramatic side-to-side darting movement when jigged, giving you great horizontal coverage of the area under your ice hole. The Shiver Minnow comes in a variety of sizes and in an array of awesome “glow” color patterns that last a long time and are deadly during the prime-times of dusk and dawn when walleyes tend to feed the heaviest.

Jigging spoons are another great choice for this time of year. You want to choose spoons that offer lots of flash, but also have a distinct and enticing flutter on the drop. Top choices here would include the Clam Blade Spoon, the ever-popular Swedish Pimple and Acme’s Sidewinder and Kastmaster spoons. Another lure we are anxious to put to use this season is Clam’s new Time Bomb Spoon. Each of these have their own distinct shape and therefore feature different flash and flutter patterns. Trying a variety of lures will help you to dial-in the right one to get the most bites.

A big key to success with any ice jigging spoon is to know where your lure is in relation to the bottom at all times. Let out enough line to position your lure about six inches off the bottom when your rod tip is at a set position above the ice. Then, when you stroke the lure up and let it free-fall and flutter down, the spoon will stop just above the bottom, provided you return your rod tip to the pre-set position. Hold your rod still for just a second or so before imparting any more action to the lure. This moment as the spoon is at the bottom of the stoke and still slightly spinning, twisting and glinting is where it resembles a dying baitfish fighting off the final death throws, and it’s this moment most strikes will occur.

Now while Glide baits and Spoons are aggressive presentations and great at attracting walleyes from a distance, it can also be a good idea to incorporate a bit of finesse into your plan as well. We like to employ a Deadstick to the set-up, rigging a small jig tipped with a minnow on a rod we set in a second hole near our jigging hole. Set the jig so it sits about a foot off the bottom. Many times, you will draw fish in with the more aggressive lure, only to have it bite the less aggressive offering. On an LCD unit like the Lowrance Elite-5 Ice Machine’s we use, the jig will appear as a straight line on the screen. If that line all of a sudden gets wider, that indicates a fish has nosed up to the jig or is biting it.

Stay aggressive with actions and lures, but remain very cautious of the ice thickness and your over-all safety out on the ice. Remember, even though you are on ice, early ice has the warmest water and offers the most aggressive walleyes during the ice fishing season, making a great time to get your Next Bite.

If you have questions or comments on this or other articles of ours you may have read, contact us through our website at www.thenextbite.com.