We do realize it’s pretty bold to state that we have found a system that will help you double your fish catches when ice fishing, but we wouldn’t say it if we really didn’t believe it. For those of you that have followed our careers, you will remember that in the late 90’s we put together a “system” of trolling for walleyes that broke new ground and launched a trolling revolution that still dominates today. Well, this Targeted Jigging System will do the same thing for ice fishing. And this truly is a “system”, as well as a totally new technique!  Perhaps the best way to tell you about this system, is to explain how, over the past 12 to 18 months, this has developed.

When we ice fish, we have always used the same Lowrance graph units like the ones we use on our boats in the summer. It’s been our contention from the beginning that these types of units offer so much more information and show a better picture of what’s happening below the surface than flasher-type units often touted as being the so-called best units for ice fishing. Last winter, on one of his many ice treks to Lake Gogebic, Gary was fishing with Jon Sibley, a hardcore ice guide who happened to also be a “flasher guy”. On one of the warmer days, as they were setting up to do a little perch fishing from their shelter, Gary watched as his friend set up 3 holes – one inside the shelter and two outside the shelter  with one of them being about 8 to 10 feet away. On that close outside hole Jon set up a flasher unit (in addition to the one at his jigging hole in the shack). He positioned the flasher located at the closest outside hole so that he could see it from the open door of his shack. Gary asked why he did that.  Jon explained that sometimes he could see a fish near the bait because the flasher was located in that hole (obviously he had very good eye sight).  When he did, he’d go to the hole and try to coax the fish to bite, and if he did catch a fish, he would immediately see if more were there so he could drop to them quickly and maybe catch even a second or a third fish.

Well, Gary being Gary, instantly saw the advantage to this, but having only one graph with him at the time he was hog-tied. However, the next time he hit the ice with his friend that was not the case. This time he brought 2 Lowrance units, both Elite -7x HDI’s.  One was used inside the shelter like normal, and one for the closest outside hole. With the Elite-7x Gary zoomed in the display to show only the bottom six feet – which was the area with historically the most fish action. With the larger screen and having it zoomed in, Gary was able to set the Elite-7x twice the distance from the shack as compared to how Jon had fished his flasher. With the screen zoomed in this way the jig looked like it was a quarter of an inch thick and the incoming fish would look like sturgeons coming in….making the whole screen highly visible from a greater distance.  He could watch as fish moved into the areas of his jig, and run out to tease those fish into biting or to simply set the hook on the ones that had already bitten. The one thing that was immediately apparent, were the great numbers of fish that would come to this dead stick set up and not bite unless you were right there to jig them! 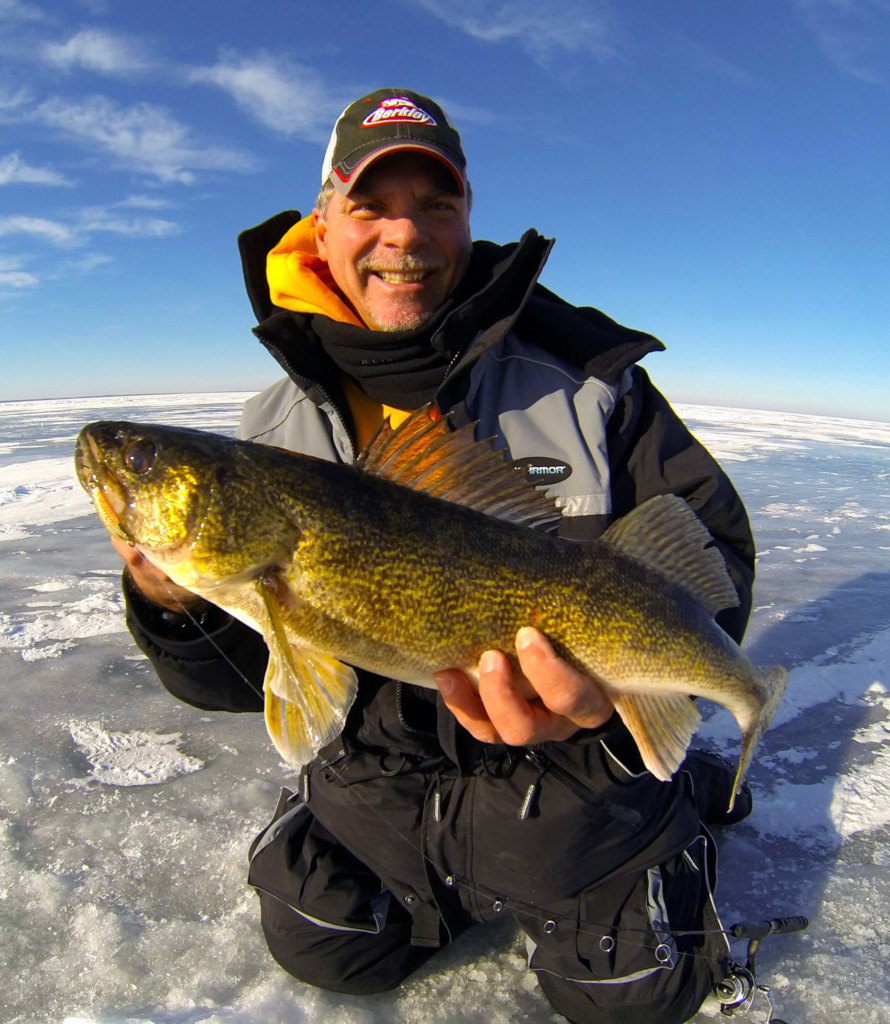 Gary Parsons with a walleye: Ice fishing as a sport has exploded in recent years, and taking the same technology we use in our boats to the ice has been a big reason why. It’s the technology that helps us locate and therefore catch more fish – and that makes ice fishing more fun.

It really seemed like this was a great system, but they ran into a snag … literally. As soon as the weather turned cold, the holes would immediately freeze and fishing outside holes like this was impossible. Both Gary and Jon knew that they had to find a way to keep those holes from freezing over in order for this to work on a consistent day to day basis.

After an exhaustive internet search, Gary found The Hot Box; a neat device created by JT Outdoor Products owned by father and son Tom and Joe Bricko. Gary and Jon contacted them, told them how we wanted to use the Hot Box, and after meeting with them at a sport show were able to get a couple Hot Boxes to put to the test. The Hot Box is a foldable aluminum “box” that fits over the ice hole and is equipped with a small heat generating lantern inside. It’s open on the hole portion of the top, and with the use of their rod-holder option, creates one half of the ideal Jigging Station. The Hot Box worked perfectly and both Jon and Gary knew that they were really on to something.

With the hole-freezing issue conquered, Gary set his sights on a way to extend the distance he could set the Jigging Station from the shelter. He contacted Chris Meyer, a friend and Rep with Lowrance, and asked him about the range of his GoFree Wi-Fi antennae that he used in his tournament boat.  He explained to Chris that he wanted to stream a sonar signal from a graph back to his shack to a tablet inside the shelter, therefore having the capability to monitor fishing holes placed a distance from his shelter.  Chris immediately saw what Gary was eluding to, and was more than happy to let Gary know that Lowrance was just weeks away from announcing that they were releasing the Gen III line of units that would come with Wi-Fi built right in. “Awesome”, Parsons thought – this was a perfect situation. Now he had the Hot Box and an easy way to stream the signal from his outside sonar to inside his shelter. This is the technology that makes the Targeted Jigging System complete.

Using this system on a trip to Red Lake in Minnesota, the TNB crew slayed walleyes and what we learned, (as Gary had suspected) was just how many fish were coming to those outside lines that could be coaxed into biting. Had those lines been tip-ups, they would have gone untouched. Being able to see the fish approach those lines, then being able to run out and start jigging made all the difference. Catch rates doubled! The real beauty of this system is that it works with many species and already the guys have used it with great success on not only walleyes, but panfish, particularly deep basin crappies and perch.

Ice fishing as a sport has exploded in recent years, and by taking the same technology we use in our boats to the ice the “catching” part of the equation will vastly improve…generating many more smiles from happy anglers!

There will always be a place for the relaxing, peace and solitude style of fishing whether it’s on the ice or on open water, but if you are serious about the sport of fishing and are the type that feels the need to push the progression of how you view your craft, then embracing technology and using the Targeted Jigging System will absolutely help you double the number of times you get your Next Bite.