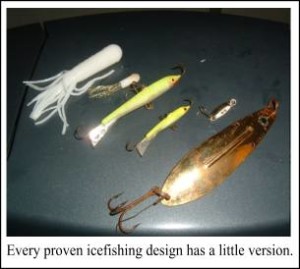 One of the neatest things about fishing has to be fishing lures! There are so many on the market. When you have success, part of the fun is definitely playing up the ‘magic lure’ idea.

Of all the lures and tackle out there, one of the details I look at is size. Proven colours, shapes or designs can be really interesting to play with when they’re offered in smaller versions.

Lure size is just like water depth: totally relative. Shallow on one lake might be forty feet, while on another, it’s four. A 1/8 ounce tube jig might be really small to a lake trout but huge to a perch or smelt.

I think small baits can be effective in a number of situations. And to be sure, there are days every winter when small lures are all the fish are biting on. By the same token, standard or larger packages will also out-fish them, too. 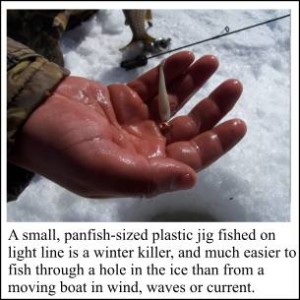 Fish that are used to seeing the same general size of lure all winter are a great example. I can think of several fisheries that get a lot of extra pressure in the winter. Through the ice they might even be getting fished harder. And in a lot of cases (and with good reason, sometimes) a few local favorite baits are used the most.

I don’t totally buy into the ‘conditioning’ of fish argument where they learn to avoid certain lures. But I’m very confident that you can pick up extra fish by showing them a smaller version of the hot lure. I think the size of what a fish stares at plays a much bigger role than most realize, when it comes down to them biting it.

To me, small food usually means abundant food, and easy food. Think about it. Chicken wings compared to big steaks or Smarties compared to pies or birthday cakes. They’re normally right there, and you know there’s going to be more where that came from.

If a fish is actively trying to eat or is already eating, it will have no trouble sucking back lots of small things. And if it’s not into eating at that time, a tiny, easier item has a great chance of being eaten, simply because it wound up in the wrong place at the wrong time. 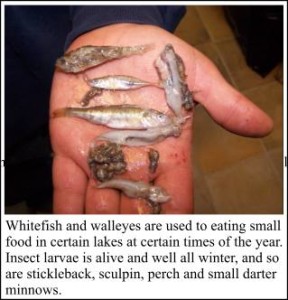 Too many big fish get caught on small lures all over the world to dispute that, I think. And I’ve seen and caught some good fish that were relating to food that would be considered by many as not worth the effort. Black bears eat non-stop, and its most berries and bugs. They’re not out running down deer or moose.

Depending on the species you’re after and the specifics of you tackle and rigging, smaller presentations also involve two other huge considerations: speed and depth. Smaller baits take patience to fish, there’s no getting around that. They force you to go slower a lot of the time, especially if you want to fish deep. It’s interesting, though, how many of the smaller, natural foods are fast-moving. The smaller minnows in the bait tanks are normally the ones zipping around. But by and large, insects, leeches and other prey items move pretty slowly. Can smaller baits be used fast and be effective through the ice?

Absolutely they can. Most of the success I have with them comes from slowing down across the board, though. More pauses, and longer pauses or laying the lure on bottom or hanging somewhere off the bottom for longer. Even delaying their drop down through the water by stopping them every few feet can work. 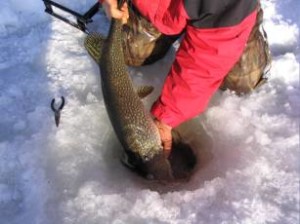 When it’s really cold, it’s a tough call, because little baits can be what the fish want, but the colder it gets, the more difficult they can be to feel and fish with in general. Being inside an enclosure really helps. If you’re fishing outside, I like having my back to the wind, and being low to the ice, and definitely seated, too. Line-watching, from the spool on your reel to where the line meets the surface, is a must for success with little presentations. Fish will attack aggressively sometimes, but no matter what the season, it always seems like fish will match the mood of the food. Slow and small usually elicits a similar reaction. Big walleyes, lakers and pike can pick up your lure like a rockbass, it’s really interesting.

With really light jigs or smaller bait rigs, current can be an interesting angle to play. For sure, safe ice where current is present is totally possible, and totally mandatory. Last winter, using really tiny plastics for lakers, we had great success on tough days simply letting the soft current blow our lures back a long way under the ice, horizontally. It took a long time to regain control of the lure and work it back towards the hole, but the fish loved it. It was almost like drifting from the boat, and it was only possible in 18 to 30 feet of water, where the bottom was fairly forgiving. With heavier jigs, we weren’t able to cover nearly as much water horizontally, because they dropped straighter.

Light line on a quality spinning reel, sharp hooks and the right rod will be the deciding factors in how well you’ll do fishing mini-baits. A piece of pine board with some heavy mono wound around it is fine for pulling big spoons or other jigging lures, but not for this kind of stuff. Icefishing gear is right on par with open-water equipment these days. And of course, when it comes to lures and the fish you’re catching, it’s all relative with respect to tackle weight and type.

Really small, panfish-sized plastics have been one of the best for me the last couple of years. Lake trout, whitefish, perch and walleye love them. And we rarely tip them with anything, just plain plastic. Four pound Berkley Fireline helps them get down to the fish a bit quicker, and it’s really tough. We routinely work lures as light as 1/64 ounce as deep as sixty feet. In shallower water, four pound mono works too. In both cases, a tiny, inline swivel is critical. It adds a touch of extra weight and prevents line twist. Smooth little spinning reels capable of holding at least eighty yards of line are a blast to fish with, and rods are normally from twenty to forty inches long, in soft action.

Tinier spoons or swimming lures like the Rapala are heavier for their size than bait rigs or leadheads and you can use line in the six to eight pound range and rods with more backbone. All of this equipment is still very light and tailored to wearing fish down and working the lure. Northlands little Buckshot and Forage Minnow spoons or the smaller Williams Whitefish, Wabblers or Little Cleos all work well. Tipping them seems to help, and if nothing else, it slows them down on the fall a little more. At the end of the day, remember that you’re using small hooks. Filling the gap with extra stuff can hurt you with light tackle.

One of the best all-around rigs is still a small split shot, light line and a small, baited hook. You can softly wave it around higher in the water column or simply leave it rigged on a float across a pail. I’ve seen this rig alone catch some great numbers and sizes of fish in the winter. If you like live or deadbaiting, make sure to grab a good selection of sizes at the start of the trip. Especially if you know other fishermen will be using big stuff.

Small hooks are usually soft and sharp. No matter what I’m fishing for, setting the hook is normally a smooth lift to sink it, and that’s it. Fish have a real hard time spitting little lures! They dig in a hold, with virtually no leverage.

There are so many good icefishing designs on the market, and nearly all of them are available is smaller versions. And don’t be afraid to target big fish like pike or lakers with them. If your tackle is in good shape and carefully selected, you will not have a hard time sportingly targeting the big boys. Fishing will always be fishing: you can go about it a lot of different ways, and being prepared and willing to try new ideas is what makes it fun. Safe ice is still a long ways off in most parts of Ontario right now, but it will come, and there are plenty of shopping days left!