Out of the Ice Age – Into the New Age: Flashers are Dead!


Late last winter a group of us headed north to Lake Winnipeg to get in on a hot bite for that lake’s famed “Mean Green” walleyes. If you have ever seen the walleyes that come out of Lake Winnipeg, the first thing that jumps out at you is their color. These fish have a beautiful green tinge to their coloration and besides being fun to look at; they can grow fat and sassy on this body of water too. Bottom line is, this is a great ice fishing destination and we were excited to get up there and experience it. 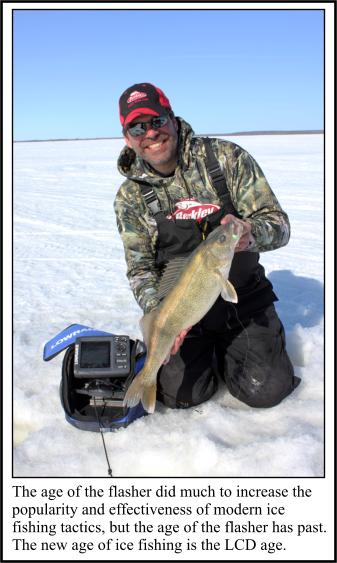 The sport of ice fishing has had so many leaps in innovation over the past couple years from improvements in shelters, rods and even the clothing being made available to anglers that have allowed us to get out there and stay comfortable in the cold temps. But no doubt, the biggest thing to push ice fishing to the next level has been the advent of electronics. When ice anglers discovered how using electronics could help them find the best fishing spots and fish them effectively, the game changed.

What we discovered on this trip to Winnipeg last winter however, will take that to even greater heights. What we were able to do using small compact LCD units out on the ice made one thing very clear to us … flashers for ice fishing are obsolete, period.

On this trip we were equipped with a Lowrance HDS-5 unit as well as a couple of new Elite-5 LCD units, both mounted in Lowrance’s Ice Machine mounts designed specifically for using these units in ice fishing situations. The Elite-5 is one model in Lowrance’s new Elite™ line of LCD units that feature color LCD displays in 3.5 or 5 inch screens and market-leading features at very affordable prices.

Now while flasher-type units have led the market on the ice fishing scene over the past few years, we have found that LCD units dominate for a couple key reasons. First of all, these are the units we are used to using on our boats, so we are very familiar with them and they are much easier to interpret as compared to a flasher.

Many of these units, like the Lowrance HDS-5 and the new Elite-5, feature both sonar and GPS capability which can be a real bonus for finding your way around out on the ice. And while a flasher can show you when a fish comes into your cone, you must be looking at the unit at that specific moment, or you’ll miss it. With a LCD, the image is “recorded” and scrolled across the screen, so if you happen to blink or look away from the unit for a few seconds (like we all do while talking, eating, or just generally daydreaming on a typical ice outing), you could miss an all important fish coming into the screen. By using the LCD when you look back at the unit, you will still see what happened when you weren’t looking, and in fact you can scroll back to check out what you might have missed!

Also, you can very quickly interpret the size of the fish coming into your cone by the signal indicated on the screen, the same way we do when using these units on our boats in open water. But that wasn’t the biggest advantage we found using these units on this outing.

The fishing on this trip was just what we were hoping for. The fish were big, aggressive and cooperative. That is as long as you were presenting your bait in just the right manner. That’s where we had an epiphany; an “Ah-Ha” moment that opened our eyes to a true revolution in how these LCD units could help fine-tune an ice fishing presentation.

We were set up on a large flat and were using fairly aggressive jigging tactics in hopes of drawing the fish to our baits from longer distances. In this particular scenario, Gary and his son Chase were fishing near one another and shooting video for an upcoming segment for Bass Pro Shops Outdoor World TV show. Both were using the same bait, a Sebile Vibrato, but it didn’t take long to figure out that whatever Chase was doing was precisely what the walleyes liked, as he was popping nice fish after nice fish while Gary’s offering was going virtually ignored.

Gary began paying close attention to Chase’s jigging motion thinking that had to be the difference, and began doing what he thought was the same action, but to no avail. Gary then began watching his Lowrance LCD unit and how his jigging cadence looked on the screen as it scrolled before his eyes. 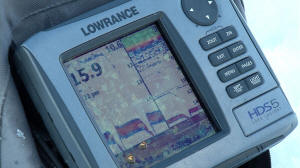 (Figure 1) He could very easily see where he jigged the bait up off the bottom, held it steady, then dropped it back to the bottom. With that mental picture of his jigging stroke, he then walked over to where Chase was fishing and looked at his screen. Immediately he saw the difference. While Gary “thought” he was mimicking Chase’s jigging cadence, by looking at the cadence “mapped out” on Chase’s Elite-5 LCD screen.

(Figure 2) Gary could tell instantly that Chase was jigging his lure up off the bottom a little further and harder than he was, then letting the bait settle back slightly before letting it drop back to the bottom. Now all Gary had to do was go back and duplicate that pattern on his own screen. He did just that, and in no time the walleyes responded. 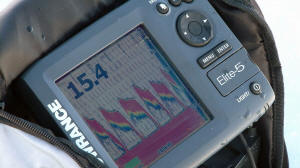 There is simply so much more you can see and interpret using an LCD unit, and we haven’t even touched on such features as Lowrance’s DownScan technology like that found in the Elite-5 DSI. But that’s a whole story to be covered another day. Just know, when it comes to ice fishing electronics, LCD is the technology that will do the most to help get you your Next Bite.