Let’s Crank Up Some Walleyes!

Where’s the best place to find walleyes as summer moves into fall? Wherever the walleyes are feeding that’s where! This time of year a walleye’s metabolism is running as high as it’s going to run all year. But this can also be a time of transition, a time when the seasons change. Walleye fishing right now can be very productive … aggressive fish that are eating all the time. It can also become very tough, as walleyes begin to move from familiar summer locales toward more “fall season” structures. The secret to successful walleye fishing this time of year (and any time of year for that matter) is putting yourself in right place using the right techniques.

To catch walleyes right now, concentrate on two primary locations … Open Water Basins and Deep Structure. While these are vastly different locales, your best choice of presentations will be basically the same for each … trolling crankbaits. This will allow you to cover water and quickly contact fish whether they’re holding in summer patterns or transitioning to late season patterns.

Waters such as the Great Lakes or large natural lakes like Wisconsin’s Lake Winnebago, feature immense areas of open water in the lake’s basin area and fishing walleyes over these vast areas has become increasingly popular over the years. Open water walleyes relate to baitfish roaming these basins in the summer. In most cases fish will be suspended in the water column, but will occasionally be found hugging the bottom. No matter where they are, keep in mind that these fish feed in an upward direction. This is important, because when running your lures, you’ll need to target depths at the same level, or above where the walleyes are located. Experimenting with lure depth will zero-in on the walleyes’ “feeding zone”, which is the depth at which they will most likely attack your bait. Many anglers make the mistake of marking fish at a particular depth, say 20 feet down over 35 feet of water, and run all their lures at 20 feet. The actual “feeding zone” of those walleyes may be at 15 feet, thus, by putting the baits below that level, they go untouched. 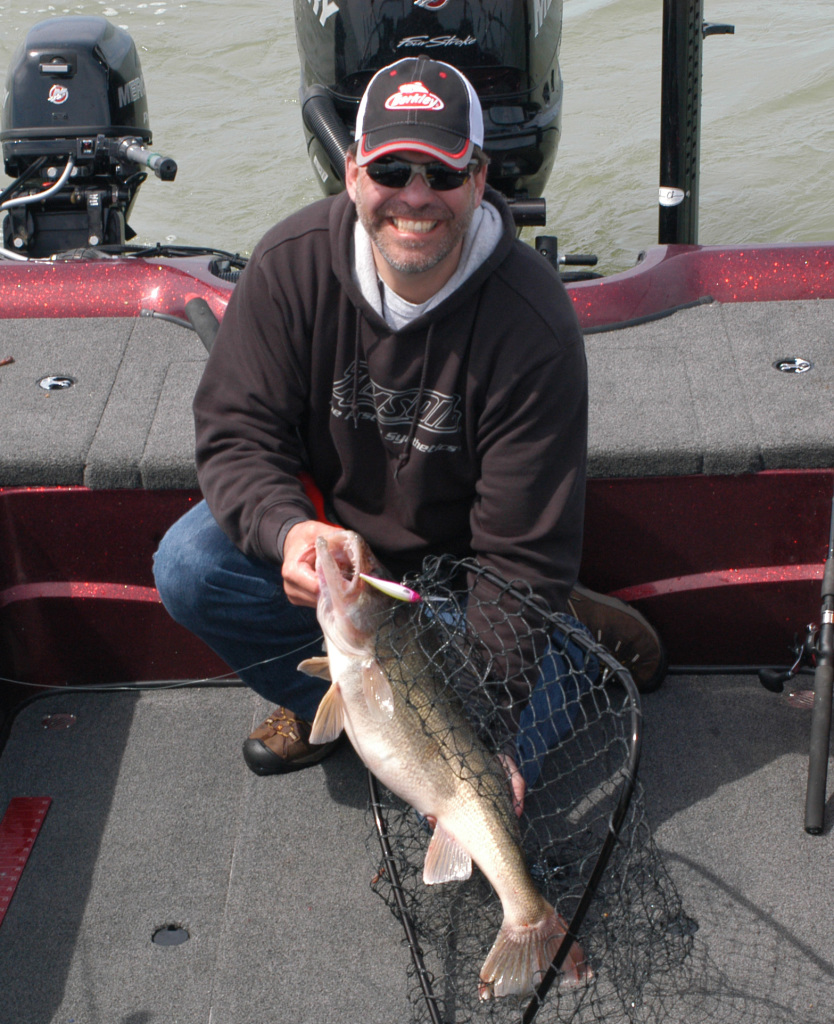 This style of fishing calls for covering vast amounts of water, so it only makes sense that by spreading your lures out as you troll would greatly increase your chances of contacting more walleyes. For this reason, in-line boards like Off Shore Tackle’s OR-12 Side Planers are considered essential gear for trolling. These boards are well designed and work flawlessly pulling deep diving crankbaits under the toughest of conditions, whether that’s bouncing through rough water, or trolling at higher-than-average speeds. The fact is, if you’re trolling open water without boards, you’re severely handicapping yourself.

Walleyes that inhabit large reservoirs like those found from the Dakotas to the hills of the Ozarks are occasionally caught in open water, but are more likely to spend the late summer period relating closer to deep water structure such as the old river channel, main-lake points, or deep flats. These fish may be sitting tight to structure, or hanging in what we call “the fringes”, where they’re suspended just off structure.

Although considered to be “structure related”, these walleyes tend to be scattered, calling for techniques designed to cover water in order to contact good numbers of fish. Contour trolling is a deadly tactic for these fish. While it is still beneficial to target the walleyes’ feeding zone, in contour trolling it is often key to keep the baits very near, and even occasionally “ticking” the bottom.

This is one trolling tactic where we occasionally do not use in-line boards but rather opt to run the lures “flat lined” behind the boat. This keeps the baits close to the contour we are targeting. We do however like to incorporate long trolling rods for this in order to help keep lines spread out enough to eliminate tangling.

The warm waters of late summer are often thought of as a good time for “high action” crankbaits; lures that exhibit a lot of “wobble” and vibration. But “moderate action” cranks; those with more “roll” and less wobble tend to be more “sure-bet” style lures, good for a wider variety of situations. Rattles can also add to a lure’s effectiveness this time of year, helping to draw attention to the lure in an environment teaming with forage. Working with the lure designers at Berkley, we’ve helped to develop some crankbaits that have proven to be great fish catchers in these scenarios. The Berkley Flicker Shad comes in sizes ranging from 4 cm to 9 cm, and a great array of colors. The action on these lures has been fine-tuned to attract fish in a wide range of situations. The larger size Flicker Shad would probably be the first choice in open water scenarios, while the smaller version is our top choice for trolling structure, especially when using lead core trolling tactics. New to the Flicker family of lures are the 7 cm and the 9 cm Flicker Minnow; baits designed with a longer “minnow-type” profile and an action that has proven deadly on open water walleyes.

What ever lures you choose to troll for summer walleyes, putting that lure in the right depth zone will be critical to success. The company Precision Trolling Data offers both tacklebox stickers as well as a very handy smart-phone/tablet app giving dive curves for most all the most popular walleye fishing crankbaits. One of the most critical parts of trolling cranks is the line you use. Line diameter plays a key role in determining the depth your baits will run. For instance, trolling with a no-stretch line like 10-4 FireLine will enhance your depth coverage, allowing you to add as much as 30% to a deep diving crankbait’s maximum depth range. This too is covered in the Precision Trolling app. To find out more, visit www.precisiontrollingdata.com.

Don’t get caught thinking that this time of the season when walleyes are beginning their transition from summer to fall calls for slow, methodical fishing tactics. This is a hot time of season, calling for aggressive trolling tactics. Cover water with crankbaits trolled in the walleyes’ “feeding zone” and you’ll be right on track for getting your Next Bite.

If you have questions or comments on this or other articles of ours you may have read, contact us through our website at www.thenextbite.com.