We’ve all been there; it’s one of “those” kind of days on the water; hot and muggy, and your attitude is melting like the ice in your cooler. You’re out in the open water, trolling over loads of fish that you know are walleyes – at least you are pretty sure since this is the same area you caught them in at this time last year. But this time around you find yourself checking your fish finder to see if it’s in the “simulation” mode, because not one of the hundreds of hooks moving across the screen is making any kind of attempt at hitting your crankbaits.

The situation doesn’t make sense. The water is warm, so the fish’s metabolism must be high meaning they should be “active” and feeding. The weather is stable; sunny and hot for the last few days. But your “high action crankbait” which simply slayed them last year is being ignored. The problem could very well be something you can’t see. This year there may have been an outstanding hatch of mayflies or baitfish and those walleyes suspending beneath the boat are tight as melons after feasting for the past few days. They’re full and lazy and not in the mood to chase after your crank. Our suggestion; offer them a little dessert, and a spinner rig trailing a fat juicy nightcrawler can make a splendid final course for an over-stuffed walleye.

Several key factors make spinners and crawlers the best bet when nothing else works on suspended (or bottom-hugging) “dog day” fish. First, a spinner is presented more slowly than a crankbait this time of year, meaning the fish don’t have to work very hard to get it. Second, that tempting nightcrawler is enough to make a walleye’s mouth water as it wiggles and emits its undeniable aroma. Third, the spinner “sounds” like a struggling baitfish to a walleye’s lateral line. And finally, the flash of a spinner will attract any active fish in the area to it, so even though you troll more slowly and cover less water, the strike attraction zone of the spinner is probably greater than with a faster moving crankbait. In other words, the fish can see this slow-moving, flashy thing from a long ways away and since it is going slowly, they will swim a fairly long way to investigate. 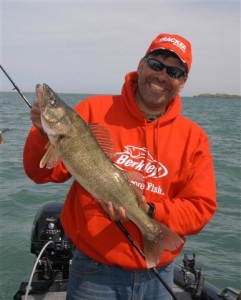 Keith Kavajecz with a walleye: In the heat of summer, when your open water crankbait bite goes bust, try switching to spinners and crawlers to get back in the game.

The dog day walleye scenario takes place to some extent anywhere you find walleyes and baitfish or other food, such as insect larvae that are not relating to structure. Although it is most common to pursue these “middle-of-nowhere” fish in Great Lakes-type fisheries like the Bays de Noc (Lake Michigan), Saginaw Bay (Lake Huron) or Lake Erie’s Central Basin, the fish can also be found in waters like Lake Winnebago in Wisconsin, the Missouri River reservoirs in the Dakotas and Montana, as well as many smaller lakes scattered across the “walleye belt”.

No one spinner type works best in all of these different waters. You have to match spinner size to the size of fish that dominates the lake. If a big fish in your lake is three pounds, then go with about a No. 2 spinner. If you’re fishing water where six and eight pound walleyes are common, go up to a bigger # 6 sized blade. We’ve found that the Colorado and Indiana shapes tend to work better than the willow leafs, possibly because the wider spinners emit more vibration than the slender willows. Other blade styles to consider would be the Chopper (pear-shaped) and Hatchet (sickle-shaped) style blades. These offer different vibrations than more traditional blades that can often trigger bites from walleyes that would otherwise ignore your offerings.

As for colors, the general rule is that the silver and gold metallics work best in clear water, while cloudier water calls for bright colors like chartreuses and oranges. But those are just general rules-of-thumb. Don’t hesitate to experiment. There are new color combinations coming out all the time – and it’s been proven time and time again … walleyes don’t like following rules. Holographic finishes are probably the most popular walleye blade patterns going. Blades like those found in the Bass Pro Shops Walleye Angler line feature holographic colors that combine both flash (like metalics) and color for the optimum in walleye attraction.

Of course no spinner harness is complete without hooks. Considering the fact that we are talking primarily about open water trolling here, we tie up most of our spinners for this application using a size #2 Mustad Ultra Point Double Wide Fine Wire Livebait Hook (model 10548R – Red color) on the front, and a #4 size Mustad Elite Triple Grip Treble Hook (model TG588BLN – Black Nickel color) on the back of the harness. In scenarios where we are anticipating catching a number of really big fish, we may go to two trebles to help increase hooking percentages.

Taking the spinner and bait to the fish depends on where in the water column they are. A very effective and efficient weighting system for trolling open water spinners is the use of the Off-Shore Tackle Pro Weights System. Using the Snap Weight option, clip one of these to the line 50 feet in front of the spinner, let out another 50 feet of line. By varying the weight (1/2 once to 3 ounces), you can vary your depth. Another weighting system we have had good success with is the use of in-line weights like the Bass Pro Shops FishWeights in-line style weights. These particular weights feature holographic finishes and a shape that closely resembles a small baitfish. That gives these weights the ability to not only take your lure down in the water column, but also acts as a great fish attractor. Which weight system is more effective? Both are … sometimes the spinners pulled behind Snap Weights get more bites, sometimes it’s the ones on the inline weights. Again, it may take a little experimentation to determine what’s going to work best on a given day.

Using Off-Shore Tackle OR-12 Side Planer in-line boards to take the spinners out to the side of the boat increases the amount of water you can cover. By putting lighter weights on the outside and heavier weights inside, you can probe different depths until you find the set-up that catches fish.

This summer, trolling for plump, dog day walleyes will be a lot less frustrating if you give them a slow-moving spinner with a tasty nightcrawler. Just like the old Jell-O commercial, walleyes with full bellies will always have room for spinners.

by Gary Parsons and Keith Kavajecz