When it comes to buying ice jigs, anglers are faced with dozens of choices, including: colours, brand names, hook and jig sizes. One of the most basic features of an ice fishing jig is its style. There are three main types of ice fishing jigs: horizontal, vertical and 45 degree angle models. Each should take up some space in your tackle box, here’s a look at why and when you should use them.

Horizontal Jigs
These jigs sit in the water with the body and hook in a horizontal position. HT’s Marmooska and Football Jigs, JB’s Hot Head or Lindy’s Genz Worm are some examples. One of the best features of these baits is that their horizontal posture makes them display well on flasher and sonar units. They also don’t flutter on the drop and have a fast sink rate. This trait is why they are my preferred choice to quickly get a bait to biting fish holding in deep water.

Another great feature of these style of baits is they are well suited for the triggering tactic known as “pounding”. Pounding is the slight quivering of baits that causes them to rock up and down every so slightly. Pounding requires extremely subtle shakes of the hand, but is a deadly manoeuvre to turn gazers into biters. 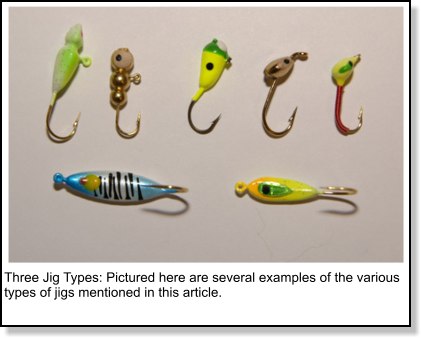 Vertical Jigs
As their name implies, these jigs hang vertically in the water with the hook eye at the top of the bait and the hook at the bottom. These baits don’t give off as good of a reading on a sonar or flasher as horizontal baits when stationary (meaning you need to turn up the sensitivity to spot them); however, when jigged their flashy, fluttering action is easily visible on a screen. Examples include Jig-A-Whopper’s Tiger Willow Spoon, JB Lures’ Big Max, or Lindy’s Frostee.

Vertical jigs’ action on a lift-fall sequence is a big-time fish attractor. A slight hopping or jiggling of these baits will also trigger hits. I particularly like using vertical jigs with minnows on a secondary, deadstick rod for crappie, perch and walleye. I’ll match the jig to the size of the minnow. To rig the bait, hook the minnow through the back, behind the dorsal fin. Also, make sure you insert the hook off to one side, as to avoid the minnow’s spine. Otherwise, you’ll limit the action on the bait. As the minnow struggles, the jig will flash and flutter. This adds additional vibrations and visual queues all of which signal the baitfish’s distress to nearby predators. 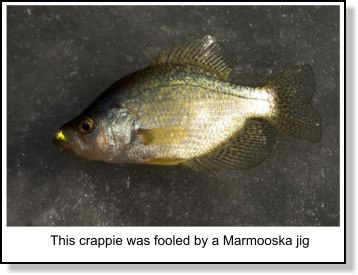 45 Degree Jigs
These jigs fit somewhere in between the styles of horizontal and vertical jigs. They sit in a 45 degree angle posture in the water with the hook slightly downward and the hook eye elevated. HT’s Blood Worms and Lindy’s Genz Bug are two examples. These baits are easily marked by flashers, especially when tipped with bait.

If I’m on a panfish lake and it’s a tough bite, these in-between jigs get plenty of time in the water. There’s something about their profile when tipped with bait that triggers stubborn crappie or panfish into biting when horizontal or vertical jigs are serving up goose eggs. Going to ultralight line of either one- to two-pound test is another way to coax bites from inactive panfish.

Using pounding techniques, anglers can get a great swimming or rocking motion out of these jigs. Here’s another tip, try and mimic a swimming aquatic invertebrate with these and horizontal jigs. I like to think of the saying “two steps forward, one step back” for this presentation style. Move the jig up a few inches, and then swim down half-way before raising it again. Using a rod with a spring bobber helps impart a natural, smooth motion. It works for perch, but I’ve found it particularly effective on finicky crappie. Moving baits up and away from fish often triggers hits. It forces them to commit or risk letting a meal get away.

I advise you to stock up your collection if you’re short on any of these three ice fishing jigs. Throughout the hard-water season there will be days when one will out-produce the other two. Just make sure you carry enough of them in a variety of colors. This way you’ll be ready for whatever the fish have a hankering for that day, and won’t be one of the anglers scratching their heads and wondering why they’re not catching more fish.