The Bonus Features Of Trolling Boards 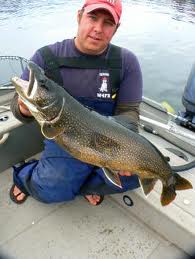 Right from ice-out, inline planer boards are a multi-use, multi-species trolling tool I usually don’t fish without. They do a lot more than just spread lures away from water disturbed by the boat’s path. Below are three of ‘board trolling’s fringe benefits.

Great Weed/Debris Catchers: Spring and fall are especially bad for all kinds of floating material on the surface. Pine needles, leaves or moss and weeds pulled off the shorelines by receding ice will all wind up on your line. Tributary mouths carrying spring runoff can be full of fish, but also caked with floating debris that will slide down and foul your baits. Once the crowds show up, lakes with heavy boat traffic can have tons of floating weeds, too.

Running inline planers ahead of your baits will scoop up nearly all of this stuff. Add in a splitshot or small snap a few feet up the line, and you can keep your baits in the game indefinitely. I can already tell this spring is going to be a messy one, with all the extra snow and wet weather we’ve had all over Ontario. Planer boards are great for plowing a trail through surface junk. Baits trailing behind are able to run free and clear.

Night Time Strike Indicator: Adding some reflective tape to boards and then setting them just on the edge of your running light’s glow works fantastic for night trolling. With regular flat lines, the rod tips are usually at a low angle, close to the water, making them tougher to see. I started experimenting with planer boards in the dark a few years ago, and really liked the results.
They don’t have to be far away. Try setting them where you can still barely make them out. Using a gentle, LED light won’t mess up your vision too badly, and illuminates the boards like a beacon, if you’d rather keep tabs on things using your head lamp. Where I fish for walleye all summer, runty smallmouth bass wind up on the lures pretty regularly, some nights. Being able to run your set-ups in plain view really helps. Offshore’s OR12 is a stable, sensitive unit and the Gold Standard for many trollers. And being bright yellow, it’s the easiest ‘board on the market to see at any time of day. Good reflective tape will stay on forever, and shows what’s happening ever clearer.

No Fear Of Tight, Aggressive Turns: Any ‘board’s core function is carrying lines out to the sides. Not only does this help with spooky fish, but it’s also a major efficiency upgrade. Tangling lines on tight turns is a non-issue.

With two lines in the water, each board’s off in its own little world, far away from its partner on the other side of the boat. With three lines in, you can easily run two wandering boards plus a third straight off the gunnel or transom. Now, you can whip around a lot quicker to re-work areas. Some of the spots I fish for rainbows in the spring are tiny, like small coves or sections of marshy shoreline. Fish can bunch up tightly in these areas. Being able to ‘re-load’ for another pass quickly is a huge factor.

Anytime you’re running longer leads in confined areas, ‘boards make a huge difference. You really have to be careful with moves like this when running plain flat lines. Sharp turns can create some horrendous messes, particularly if you’re making lots of turns back up wind. Being spread wide makes it effortless. Watching a big, powerful fish bury a board digging in through a sharp, outside turn is a real rush. Throwing fish that ‘outside speed ball’ can be a major trigger at times. I’ve seen it work in water as cold as 37 degrees.

Regardless of the scenario or technique, catching fish on inline ‘boards is visual and fun. Hopefully the ideas above give you a better appreciation for just how useful these tools really are.

J.P. Bushey is one of OFN’s original members and has contributed with us for close to ten years. He’s a year-round fisherman who spends a lot of time on Ontario’s big water. JP fishes, guides, writes and promotes the sport with his unique brand of energy and passion. For more tips visit his blog at www.thebusheyangle.com .