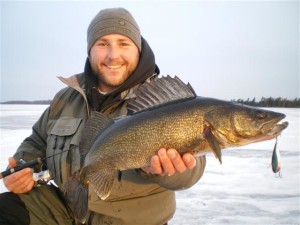 Finding walleye in shallow water is a good bet at this time of year. Whether it’s on a weed flat on a small back lake or in the mouth of a river or creek that feeds a larger system, it’s a sure thing that walleye will utilize shallow water late in the winter season.

Setting tip-ups and waiting for flags to fly is a popular and effective method for shallow water late ice walleye. Myself, I like to jig with one line and put out a tip-up with a big dead bait for my second line. One thing’s for sure, where you’ll find big walleye at this time of year there’s going to be big pike under the ice with them.

When it comes to catching walleye, a traditional jig and minnow will do the trick. However at this time of year live bait isn’t always necessary. Soft plastics work well as do minnow imitating baits like the Lindy Darter or the Rapala Jigging Rap.

If the action hasn’t arrived in the shallows yet, pull out to deeper structure that’s nearby. I’ve done just as well in 30-feet as I have in shallow water in late march.

Take extra care when going out on the ice late in the season. Conditions can change quickly resulting in unsafe ice.

Ben Beattie is an outdoor writer and full-time fishing guide based in Sioux Lookout, ON. For more information, visit Ben’s website at www.benbeattieoutdoors.com