Lots of solid ice and lots of walleye! Making ice daily out there, we had close to 12in of very hard ice under our bungalow. If you’re bringing a hand auger, power auger or chisel, make sure it’s sharp. Not a whole lot of snow on the ice so easy traveling, but it’s like drilling through cured cement. Ice conditions up there are actually perfect. Lots of snowmachine and ATV traffic all over this end of the lake. Rob’s got a good little bungalow village going out there. We talked to a couple groups on either side of us and everyone 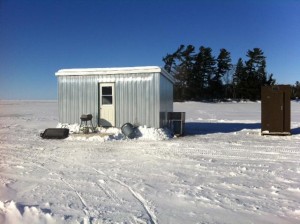 was getting good numbers of walleye along with some really nice ones. Lots of herring, whitefish, big perch and pike mixed in, as well. That’s just such a key, strategic area he sets up on every year. Callander Bay really is a little fish factory. And there’s zero downtime fishing in a bungalow, which makes it so easy to capitalize on waves of fish that filter through at all times of day. You can really rack up numbers when there’s a group working with sonar and lines at peak periods. We actually converted a handful of double headers during our stay and one triple header!

We primarily jig with light outfits and four to eight pound mono, depending on lure size/weight. Depths range from 18 to 24 feet and the bottom is primarily sand with some hard patches mixed in. Slip bobber outfits baited with Rob’s shiners also took a lot of fish. Set off in a corner of the bungalow, the floats normally act as an early warning sign that fish are moving through and it’s time to start watching the sonar. 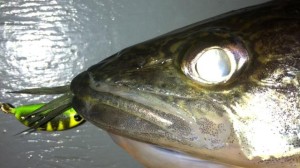 Small, octopus-style hooks and split shot work well, but we also experimented with a range of baited jigs, like Simcoe Bugs, Creep Worms and 1/16oz ball heads. We caught several fish using Berkley Micro Tubes and a scrap of minnow, too.

Using your sonar is really key. We ran both vertical display flashers as well as LCR units. Most walleyes will start on or near bottom, but can be teased and triggered several feet up. At peak periods, most fish that showed up along bottom were hitting right away. Later on, being able to trigger them with depth/cadence changes was very important. Fish marking in schools well off bottom were usually herring, and these are a lot of fun when you’re jigging light equipment! We landed a giant one afternoon, the biggest I’ve ever seen. The daily herring flurries are worth the trip alone. Awesome for kids or spouses! 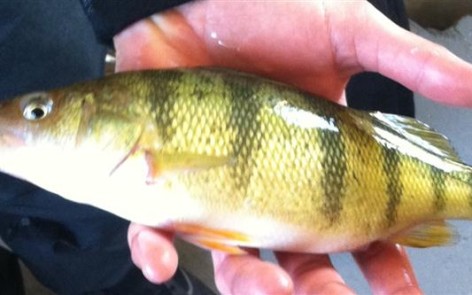 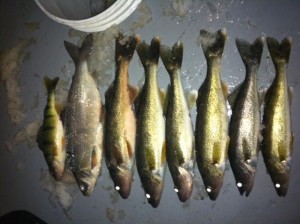 Every basic lure-style we used produced fish of all kinds. Small Williams, Buckshots and Tinglers were good spoon picks. We also caught a lot of fish on a variety of plastics, like small micro tubes, minnows and twisters. Jamming large Simcoe Bugs inside a tube was very good, as were full-sized, 3.5in tubes. Plastics ‘closed’ a lot of the walleye we had worked up well off bottom. A range of colours worked from naturals (silver/purple, gold, white, smoke) to hot (black/pink, firetiger, pink/chartreuse). Glow is always a hot one in Callander Bay. Rob got us going on the plastics mid-way through our second day and it worked really well. Experiment with glow. Try some baits fully charged and glowing intensely. Try others with only a small segment charged up, and try others barely glowing, and dull. 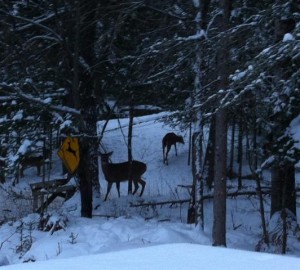 Always start by pounding bottom no matter what you’re jigging with, and gradually tease your lure up. We had walleyes that were coming six feet or more before nailing it.

Great service as usual. We showed up almost 2hrs early on our first day and Rob had us out fishing within 25 minutes of arriving. Bungalow was warm, minnows were waiting and holes were ready to roll. Again, zero downtime. Make sure you bring a camera not only for the fish, but wildlife, too. Hyatt’s deer yard pets are just beautiful and all over the place. I got real close a nice 8 pointer just beyond the 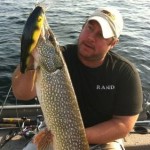 bumper of the truck as we were leaving. Great trip, great fishing, great time. Had a couple good fish meals on the propane burner.

For me, nothing beats cooking a fish two feet away from the hole it came up through. Can’t get it any fresher. The fishing up there is hot right now, we averaged about thirty walleye a day between our group of three. We’ll be back for sure! 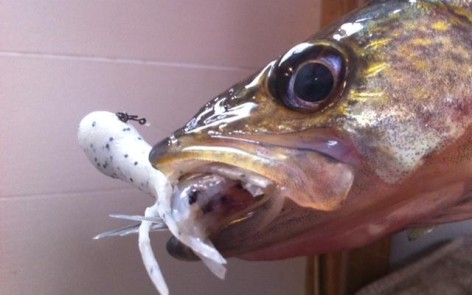 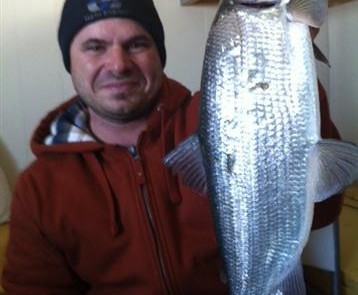 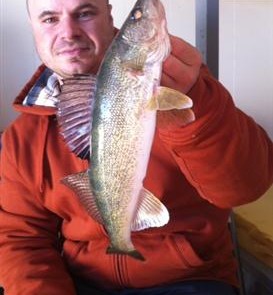