For those that don’t ice fish, it might be difficult to understand what drives an angler to forgo the comforts of his favorite chair in front of the fireplace on cold and blustery winter afternoon in favor of sitting on an over-turned bucket and staring at a hole in the ice? It’s actually a pretty simple answer really; it’s the same thing that drives every angler whether it’s on the ice or in the open water. It’s the anticipation and excitement of getting the next bite. It’s that same feeling that all fishermen long for anytime they wet a line. The key to satisfying that anticipation is to be successful … to catch fish. The ice angler that is catching fish will invariably be warmer and happier than the one that’s not catching fish. That’s one of those laws of nature that only an ice fisherman can truly attest to.

As the sport of ice fishing has grown over the years, another law of nature has become increasingly apparent … he who stays mobile on the ice catches the most fish. This has vaulted the ice fishing industry to such innovations as portable ice fishing shelters, durable gear sleds and power augers. It also has much to do with why such accessories as locators, GPS units and underwater cameras have become ice fishing standard equipment among a growing population of ice anglers. It has also brought about ice fishing strategies and techniques that work to put the angler on fish faster and more consistently. 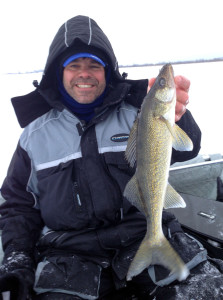 Keith Kavajecz with a Walleye: Staying mobile on the ice is a great way to tip the odds in your favor when it comes to catching more walleyes through the ice.

For decades, walleye ice fishing has concentrated on targeting large feeding flats, reefs or similar shallow structure during low-light periods when the walleyes exhibited the most feeding activity. Basically the game plan was to drill a bunch of holes, fill them with tip-ups, and wait for the fish to move up to feed. That tactic does catch fish, and is still a viable way to put walleyes on the ice. But for the modern walleye ice angler, that’s not good enough. We’re used to the tactics we use in open water scenarios … cruising likely areas in our boats, using maps, GPS and sonar to find the fish, then utilize whatever tactics it takes to catch them. It’s this “run-and-gun” approach that you want to adapt to your ice fishing as well.

To target the walleyes that are not necessarily in feeding mode, you have to find them where they spend the majority of their time … in the deep water. That’s not to say that they’re out roaming the open basin of the lake, but they will be close to it. More likely, you’ll want to target staging areas where the deep basin runs close to the shallower areas where the walleyes are moving up to feed, and especially where the fish are holding in preparation for moving toward spawning areas as spring approaches. This may be a deep flat just out from the mouth of a spawning river, or even a basin area adjacent to rocky shoreline spawning areas. It could be a thirty foot flat that runs up along a main lake reef, or it might be the fifty foot shelf off the end of a main lake point. To find out for sure will take a bit of exercise, and a reliable ice auger.

You may already have a few of these key spots marked on your boat’s GPS unit, as these are often the areas that prove most productive during the post-spawn and late fall open water fishing periods. If this is the case, then part of the work can be made rather simple by transferring the coordinates of likely spots from your boat-mounted GPS to a hand-held model or possibly a unit like Lowrance’s Elite-5 Ice Machine, a portable GPS/sonar combo unit wrapped in a neat “ice-fishing-friendly” carrying case that can easily be hauled around with the rest of your ice angling gear.

Once you’ve located a general area to scout out, it’s a matter of drilling several holes and using the sonar to scan the bottom for signs of life. Since walleye’s tend to be rather lethargic this time of year, we often will go ahead and work the spot for forty five minutes to an hour before moving off to greener pastures (or in this case “bluer ice”).

Tip-Ups are still a crucial tool for the mobile angler. Here in Wisconsin, each angler is allowed three lines at a time. Therefore, a typical set-up would consist of two tip-ups, and a “jigging hole” per angler. Tip-ups are usually rigged with a spool full of 20 pound test Dacron line (which makes handling the line in cold temps a breeze) tipped with ten to fifteen feet of leader material. A six to eight pound test mono like Berkley XT is popular, but under the ice, the water can become extremely clear by mid-winter, so a line like Berkley’s Vanish Fluorocarbon Leader Material can be an advantage. The fluorocarbon is virtually invisible under water, making stealthy presentations possible … an important factor when dealing with finicky walleyes. On the business end, we’ll tie on a Mustad Double Wide Fine Wire Bait Hook (model 10548R), size #2 or #4, and bait that with a medium sized minnow (match hook size to minnow being used) hooked through the back with the hook parallel to the dorsal fin and the point of the hook facing the head of the minnow. We find this set-up really increases the hooking percentage even over using a treble hook as many anglers prefer on their tip-ups. Weight the set-up with a split shot set ten to twelve inches up the line and you’re in business.

Once the tip-ups are set, you can grab your jigging pole and work a more active presentation while you watch the tip-ups from a short distance. A good quality jig rod is every bit as important when ice fishing as it is when jigging for river walleyes in the spring. We helped design a line of ice jigging rods for Clam called the Walleye Weapon Series that are available exclusively through Bass Pro Shops. Teamed with a small spinning reel spooled with 8 or 10 pound test Berkley Nanofil, will give you a set-up with the finesse and sensitivity to catch even the lightest biters. The Nanofil is a great line because it doesn’t soak up water like other “super-lines”, and the new Lo-Vis Green color is great for fishing clear water.

Using your electronics and being observant to what’s going on below the ice can help you quickly determine if the spot you’re in is worth a lengthier stay, or if making a move might be a better option. For instance, if you’re observing fish in the area being attracted to your jigging offering, but are not getting them to commit, that might indicate that at least you’re in an area that’s holding walleyes and sticking it out a while may prove productive for the tip-ups. On the other hand, if you see no sign of life after thirty minutes or so, then it’s time to fire up the auger and get back to work drilling in a new area. Remember, staying mobile is often key to ice fishing success.

Being a successful walleye ice angler is all about tipping the odds in your favor. You should at least put as much energy into it as you do when chasing these worthy critters in open water … maybe even more. After all, the more you sit around on the ice, the colder you’re going to be anyway; at least being mobile you’ll help yourself stay warm and have a much better chance of putting yourself on some walleyes that are in a biting mood, which is something you’ll never do from the comfort of your favorite chair in front of the bio ethanol fireplace.

by
Gary Parsons and Keith Kavajecz

Editors Note:
If you have questions or comments on this or other articles from Gary Parsons and Keith Kavajecz, visit their website www.thenextbite.com.