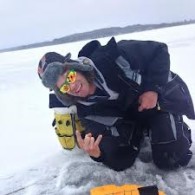 Anyone that knows me understands that one of my true passions when it comes to the sport of Muskie Fishing is teaching the virtues of catch and release. While I have covered this topic up one side and down the other over the past several years, one aspect of the practice that has not gotten as much attention as it should is release issues on ice.

As an ice fisherman myself, once I really started to be very serious about release, in general – realized that for some reason when ice fishing, things just tended to be a little more lax. Possibly it’s the simple fact that – out of boat – there’s more room to roam. More things to do, more people that can be involved … many more distractions. These things are what make ice fishing fun, but we have to take release issues seriously when the water is hard too. Most agree that there is far more unintentional (and intentional by some folks who don’t care) mortality – even with the cold water – of fish caught through ice. 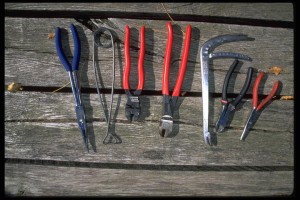 Possibly the more important issue here, is simply that of “too much time”, especially so with the use of tip-ups. Tip-up fishing incorporates live and dead baits. Simple problem that we’ve mentioned here many times regarding open water bait use: swallowing. Quick-setting is the simple key here, but with many it’s still not a priority. It has to be – or the fish dies. These days I work very hard when fishing tip-ups to keep a close eye on the flags and to make sure that no one tip-up is ever too far from any angler in our group. That way, when a flag flies, there’s someone there in short order to grab the line and set the hook. Quick-strike rigs are meant to lessen the chances of fish swallowing a bait and getting hurt or killed in the process, but it only works if the quick-set rig gets set “quick”.

Also, simply keeping fish out of water too long can be very harmful to fish being released alive. Part of the problem is the same issue encountered in the open water season in that it’s just not good to deprive a fish of oxygen too long by keeping it out of the water. The added issue in the winter is that cold temperatures, especially severely cold, can quickly freeze a fish’s soft tissue, particularly the gills and the eyes.

Another very basic aspect to proper fish release is having the right tools at hand. It never ceases to amaze me how many anglers that would never think of launching their boat without being well equipped with pliers, jaw-spreaders, hook cutters and other hook-removal tools, show up on the ice with none of those tools in their gear assortment. All this is really just common sense, but it does seem that when it comes to ice fishing, common sense often gets “frozen out”. Please read this and use these guidelines to practice effect live release on the ice too. It’s an easy and effective way to ensure there will be trophy fish still swimming in our favorite waters ready to be our Next Bite.