Edging Into a Good Walleye Bite!

There are a multitude of walleye anglers, particularly those that concentrate their efforts fishing natural lakes and mid-sized reservoirs, asking the same question this time of year … “Where are the walleyes right now … when it’s a little late to really be spring, but it’s not quite summer yet?” It’s a time when we say the walleyes are “on the edges” … in more ways than one. They’ve finished their spawning ritual, but haven’t set-up on classic summer habitat. It’s a pattern (or lack of one) that many walleye anglers struggle with every season … one of those “in-between” times … a transition period where walleyes are on “the edge” … moving from one season to the next. You can catch fish during this period … you can even have great catches … but the walleyes tend to be “here today – gone tomorrow”, making consistent success difficult at best. The key to catching these “edgy” fish is to concentrate in the general area surrounding structural edges.

Unless you’re dealing with gin-clear water, walleyes won’t be found on deep structure, nor do they tend to be really shallow right now. Look for these transitional walleyes somewhere in the middle … in that eight to twenty foot range … usually relating to the primary break closest to their spawning areas. The primary break defined as the first major drop off from shore. For instance, if the shore tapers off to say ten feet, then drops into fifteen, that’s the primary break for that area. Now that sounds simple enough, but it’s where they are located on the break that’s the trick. They may be on the bottom edge, the top edge, someplace in between, or on the flat adjacent to the top edge.

If the weather has been stable, and conditions prime for the fish to be active and feeding, look for them to be near the top edge of the break. That’s not to say they’ll be right on the edge, but they won’t be far from it. They could be cruising the adjoining flat chasing schools of minnows … but they won’t be far from the edge. A flat with sporadic or newly emerging weed growth, makes the situation all the better. In fact, weeds on the flat create a different set of edges that attract the fish this time of year. These edges offer travel routes as well as ambush points for feeding fish. On many lakes, you’ll begin noticing better catch rates early and late in the day … probably because the walleyes are sitting tight to the primary break during mid-day, and moving on to the flat to feed during low-light periods.

So what’s the best way to catch these “walleyes on the edge”? That’s a tough one … the problem being that May can be a time when virtually every tactic in your arsenal will catch fish under the right circumstances. That may make it sound easy, but the key here is “under the right circumstances”. Picking the right presentation for the given situation when you have so many options can play mind-games with many anglers.

Let’s look at a couple scenarios. It’s a beautiful, calm and sunny spring day. You’ve found a primary drop off that goes from eight feet down to twelve off a large flat with scattered weeds along the top edge. The break runs pretty well defined for about a hundred yards, so you start off working along it with bottom bouncers and spinners. Things aren’t looking very promising for the first fifty yards, then “bang” … you catch a nice sixteen incher. Thinking you’re on to something you continue on. Another thirty yards you go untouched and then “bang” … another decent fish. You could go all day like that but you decide to turn around and go back through the area. This time you pay close attention to your electronics, and notice that the spots those fish came from were two small hard-bottom points that jut out into deeper water. These irregularities in the break are classic fish holding structures. While you could keep trolling back and forth with the spinners, and probably pick up a few more fish, you’ll risk spooking those fish off and be forced to start looking elsewhere. A better plan of attack would be to put away the bouncer rod, pick up a jig stick and try pitching small jigs to those isolated spots on the break. 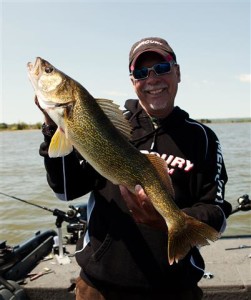 You can catch fish during this transition period from spring into summer … you can even have great catches … but the walleyes tend to be “here today – gone tomorrow”, making consistent success difficult at best. ** Photo Courtesy of Hannah Stonehouse Hudson/StonehousePhoto.com

For the next scenario, the primary break runs across the entire mouth of a large bay … several hundred yards wide, dropping off from fifteen to twenty feet off the edge. The flat is covered with scattered rock piles, clam beds, and sparse newly emergent weed growth. There’s a fair “walleye chop”, and it’s an overcast day. With the low-light conditions and the deeper flat, it’s a good bet that the walleyes will be up and roaming. This would be a great time to pull out the trolling rods and concentrate your efforts pulling crankbaits over the flat just inside the edge of the break. While there’s little need to spread lines out too far (remember, the walleyes are likely to be close to the edge of the drop), we’ve found that it never hurts in a situation like this to run one line out on an Off Shore Tackle OR-12 Side Planer so that it’s running well up on the flat. It’s amazing how many times that has accounted for a bonus fish or two in the course of a day. Keep your crankbait selection simple … smaller crankbaits typically get the nod here as they “match the hatch” in size and running depth in the early season. Berkley Flicker Shads in the 4 cm and 5 cm sizes are ideal tools to cover shallow flats in this scenario.

Of course that’s just two scenarios out of dozens that you may encounter during this transition period. And this “edge” deal doesn’t come in to play on every body of walleye water … the Great Lakes for instance have transitional patterns of their own … fodder for another article. But for most of us, walleye fishing during this period between spring and summer will be all about edges. After all, it’s been a long winter, and waiting to get out on the water to get our “Next Bite” has us all feeling a bit on edge these days.
Editors Note:

If you have questions or comments on this or other articles from Gary Parsons and Keith Kavajecz, visit their website www.thenextbite.com