It’s still unknown to many and it’s a fabulous and booming fishery that exists very close to home and it’s much more accessible and easier to tap into then you think. It’s the spring salmon and trout fishing opportunities that abound all across Lake Ontario’s shores each spring. 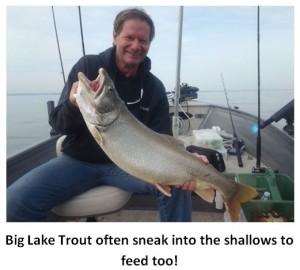 Targeting trout and salmon early on in the spring is a great way to fill the void and pass the time before the seasons for other warm water species open. Since there is no closed season’s on these species in lake, usually the action all begins in early to mid March with the only thing holding you back will be weather and safely accessing a local boat launch.

Traditionally the Niagara shore line around the lakes south shore is the fastest to warm. With spring rain and snow melt runoff, the areas around harbor mouths and tributaries will create isolated hot spots with slightly warmer and colored water. These are key features to look for when searching out a destination for the day. Nearly all sonar’s these days will display the lake’s surface temperature. Use this feature! Staying on top of the areas with warmer and “greener” water will put you in the zone. Brown Trout, and Coho salmon often make up the bulk of the early season catches. Rainbows will appear sporadically as they are transition from their spawning runs and the Chinooks will be in full force once water reaches a steady temperature near 44 degrees. 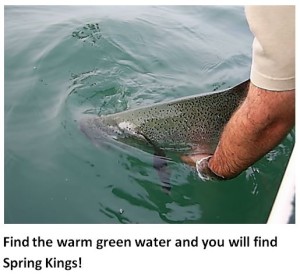 It’s no coincidence that a popular event that coincides with and as well, celebrates the hot local fishing is the annual Spring Salmon Derby that the St Catharines Game & Fish Association holds through the months of April & May.

Now as we discuss tackle selection, let’s bunk the misnomer that you need to take out a second mortgage to purchase a big boat decked out with electric downriggers and the like to experience the fine action that’s available.

Tackle selection needs not to be complicated. Since in the early part of the season you will often be in 10-50 feet of water small to medium sized stick baits, diving crank baits and flutter spoons are the baits of choice here. When fishing in coloured or muddy water, colour patterns containing bright oranges, lime & chartruse are good picks, where more natural finishes like blue/silver, black/silver with light green and purples work better in clearer conditions. 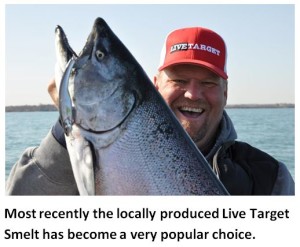 How you are going to deploy them is going to depend on the lineup of trolling combos that you have available. You may be worried about having to purchase more rods and tackle, but chances are you may already have just about all you will need to get started. For example, if you already troll for walleye on Lake Erie, the Bay of Quinte or maybe even for inland lake trout you chances are good that already well equipped.

In Canadian waters on Lake Ontario, anglers are allowed to use two rods per person when trolling. So depending on how many anglers there will be aboard, a simple line up of four trolling combos is ideal. While they aren’t absolutely necessary, line counter reels sure will help in putting baits in the depths and be able to repeat successful patterns. Having two combos with 12-15lb test monofilament and/or two with 30-50lb braid is a good starting point. Using lead core line or weighted diving disks (like Dipsey’s or Deeper Divers) is a great way to get your baits down to the desired depths and it also often imparts a unique action to the baits as well. Using lead core setups with 2 to 5 “colors” are ideal when fishing in waters less than 40 feet in depth. The use of planer boards (inline or “mast & ski”) will assist in spreading baits to cover water & reducing the chances of crossed lines. Finally, make sure the rod holders you have chosen and are properly mounted. 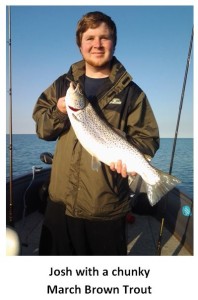 Shane Thombs of FINtastic Sportfishing, is a veteran charter captain who regularly fishes the waters of the south western basin of Lake Ontario. “ Many of my first time clients are pleasantly surprised when they realize the quality of the sport fishery that Lake Ontario offers so close the major urban areas” Thombs remarks. “We are spoiled to have it so good, and so close to home.” Another option that Thombs also offers is “advanced on the water workshops” where clients are taught hands on to set a spread of lines out and apply techniques on their own boats with confidence.
Perhaps you don’t have a boat, but still want to tap into this spring fishery? Well there many excellent shore fishing opportunities that abound to those who put in a little legwork. Again the key is going to be fishing in areas where warmer and colored water will pile up along an exposed shoreline. Taking a look at various satellite images of the lake’s surface temperatures is a great way to determine ideal locations.

Josh Miller, an employee at Grimsby Tackle is one such angler who not only treks along the shorelines by foot but also stealthfully in his kayak as well, is always willing to help anglers get set up properly. “Spoons are the lure of choice since they imitate the smelt and shiners that are the main early season forage and they cast be cast a great distance. The ideal outfit I have found is a 10’6 medium action spinning rod teamed with a quality and well balanced spinning reel in a 2000 series” he advises. The decision between braid and monofilament is an easy one with Josh. “Braid for sure from 10 to 15lb test allows you to really fill the spool and to gain distance when throwing spoons”. Further probing concluded that choice spoons for him often are Krocodiles, Little Cleo’s and EGB’s.

Josh also added that a fluorocarbon leader and a high quality ball bearing swivel should not be forgotten.

Finally, let’s remember that the lake’s water is still extremely cold. Dress accordingly (I still wear a “survival suit” until early May) and respect the elements.

So if you are wondering how to pass the time before other species season’s open this spring and summer, why not try out some of the world class fishing that is just a stones throw (or a spoon’s toss?) from shore! 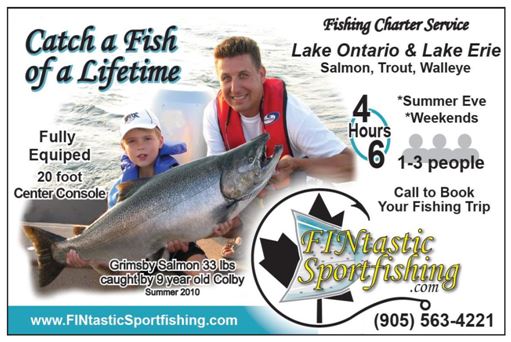