Catch and Release Muskies After Dark

Night fishing is in many ways – exactly the same as fishing during the day, when it comes to structures, lures, tactics and such. Yet, it does pose some unique issues for handling the landing and release of hooked fish. As with the fishing itself, every step of the process is made a little more difficult by the cover of darkness, and, even more potentially dangerous. When dealing with big, strong fish and heavy hooks, there is potential for serious injury to both fish and angler.

Being hooked to a lure that is also still hooked to the fish can happen in a flash. Serious problems for both parties are the result. While fishing has never been considered an exceptionally dangerous sport, serious injury or even death could be the result if the angler is fishing alone at night! I offer here that fishing alone in total darkness is not recommended for anyone. Regardless of how many fish an angler may have handled, it only takes one mistake to get in serious trouble with no help present.

Without a doubt, some type of hands-free lighting is needed. I should mention too, that it pays to get a little more organized (shudder). I want to offer here, by quickly mentioning that I am guilty of “not” doing, at times, what I’m going to strongly suggest (admit it now, so I don’t have to hear it later).

This is one of those cases of “do as I say and not as I occasionally do” (I need reminders too). Make your boat clean(er) for night fishing. That mean all “spare” lures should be put away. If nothing else, be certain a designated landing area is clean. One neat thing about night fishing is that you don’t need seventy-four color combos of each of your favorite lure-types readily available. Ideally, have four different lure types set to go on rods-it’s all you realistically need. The rest should be in storage.

Definitely be certain to have the “must-have” tools: long-nose pliers, quality hook cutters, jaw spreaders and a quality landing device, with deep bag and fish-friendly mesh that will allow for subdued – yet in-water release (be it a large hooped net or a cradle-type device). Realistically, the only addition truly necessary is headlamps. As with fishing alone during the day, make “certain” the release tools (remember, don’t go without “quality” cutters) are with you and in “one” location that is secret to no one in the boat. And, as with fishing alone, have a designated “landing” area with plenty of space. The front deck makes a good location. Night fishing is no time for wild stabs with landing nets (or, you’ll eventually learn why), so you will have time to lead the fish to the bow. 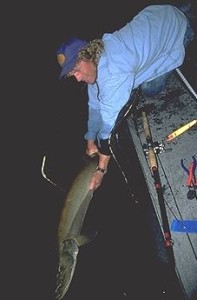 Definitely, each angler should be wearing a headlamp-to be turned on as soon as a fish is hooked. A spotlight is a great idea too. Night fishing/landing is most efficiently done with three anglers, one to fight the fish, one to land it and one to follow the action with the spotlight. Not only is the fight more enjoyable when the whole battle is lit-up, but the spotlight makes efficient landing easier too.

Some serious, full-time night fishers like to rig their boats with interior lights too, so they can see the whole inside of the boat when they need to, or at least that landing section. In addition, many anglers will keep black lights on at all times (little affect on night vision), to light the interior while night fishing.

As always, it’s arguable whether or not water release or landing device use is better for the fish. What isn’t arguable is that getting it done as quickly as possible, while keeping the fish’s “head” (the part that breathes) in water as much as possible is best for the fish. Considering all, a large net, cradle or cradle/net hybrid is likely the quickest and the safest. As always, subdue the fish in the “treated” bag and make certain the fish is in the water while someone goes for the cutters.

I’m big on cutting hooks, rather than yanking and pulling with pliers any time of day, but at night I really suggest it. As they say-just do it! I also suggest gloves at night. Night is simply a bad time to get hooked (no time is good, but). With gloves and cutters, hooks can safely be eliminated in seconds. In general, just don’t take any chances.

Be prepared! If photos are part of a successful release, make certain they are efficient (all anglers know where readied cameras are and how to use them). It’s best for the lucky angler to stay on their knees near the edge of the boat for photos, so they can get the fish in the water if it thrashes. Knowing how to properly hold a nice muskie is important. Don’t go night fishing unless you are certain about how to hold esox. Night is no time for a training session on getting the proper gill hold.

Also, I mentioned not doing it alone. It really is not a good idea-for a lot of reasons. And, it’s pretty boring out there in the dark alone too. But, I must also realize that I am dealing with loony pike and muskie fishers here, so… if you absolutely must go alone, pinch the barbs on your night baits’ hooks. Normally, I say don’t bother with that-just be ready and willing to cut hooks. If you’re alone, smash the barbs for certain.

Being willing to cut hooks works fine until you’re alone. If your strong hand just happens to be the one that’s attached to a Muskie’s head by a lure that you now both detest-very likely-cutting that hook is impossible (talk about your long night). Going barbless when fishing alone (especially in the dark) makes quite a bit of sense.