Brook (Speckled Trout) by the Dozen! 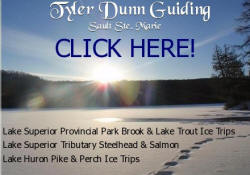 Chasing brook trout throughout Ontario’s inland lakes brings many to the thoughts of wild adventures chasing quite possibly Canada’s most beautiful fish species. Small ponds to giant inland lakes hold Ontario’s world class populations of brook trout. Bushwhacking Northern Ontario over the last decade has taken me too many magnificent, pristine lakes. There is definitely a sense of accomplishment after a long hike, paddle or portage to attain one of the speckled treasures. The following are a few fishing tips to help you land more and bigger brook trout. 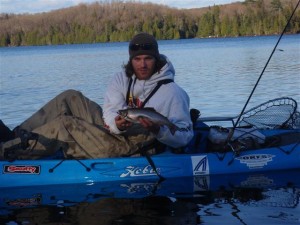 Early spring or ice out conditions bring upon a time when brook trout can be finicky or extremely active. First, I like to plan an ice out trip around the next weather pattern rolling in. If a low pressure system is moving through I like to fish the day before its arrival. If high pressure is on the way, I like to wait it out and fish the declining barometer on what will be hopefully be a little bit of a nastier day. For the most part, the majority of my early season speck fishing is done with casting. Whipping spoons, spinners, minnow baits and jigs into the shallows can be some of the most exciting trout fishing you will ever do. When the trout are active expect arm wrenching hits but when the fish seem more curious than active it will drive even the most seasoned speck hunter nuts. When specks seem to be suicidal, I like to chuck spoons and minnow baits. I tend to work these baits fast but always incorporate pauses during my retrieve. Most often this is when the fish will strike. If the bite seems a bit slow or the fish are following and just not hitting is when I like to start throwing buck tail jigs and spinners. These two baits can be worked much slower compared to heavier spoons and minnow baits. Spinners in the #2- #4 range are my favourite sizes but smaller and bigger spinners do have their time and place. Cast the lures mentioned above into the extreme shallows especially during low light conditions. Low light conditions are not only during sunrise and sunset but any day with wind, overcast or cloudy skies. Brookies can be found in water less than a foot during these times. This is why it is so important to make your cast as tight to shore as possible. I like to use a 7 foot medium/fast rod with the reel spool up with braid for super long casts and no stretch on hook sets. 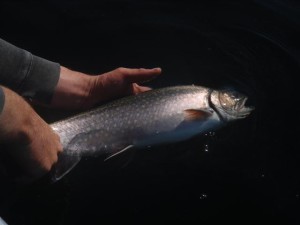 Trolling for brook trout is a common method for me when I am fishing a new lake. Trolling and watching my fish finder with very attentive eyes gives me an idea of the lakes bottom structure such as reefs, underwater points and weed beds. This will also give me the chance to mark these spots on my GPS and go back to them later to work thoroughly with casts. On lakes that I have fished previously and I would like to think I know the lakes structure. Trolling is still a must especially during the warmest months of the year when specks often move out to fairly deeper water and roam, looking for an opportunity to feed. Using my handheld GPS, I always keep a close eye to my speed and my previous track. I will also have waypoints where I mark, had hits or caught fish at. I don’t like to troll any faster than 2mph and I am also giving my lures an erratic action rather than trolling straight. S-trolling and sometimes even pumping your rod is what triggers strikes. Moving that lure up and down in the water column with the odd speed burst or drop will entice many more strikes. My trolling set-ups vary from lake to lake but you will always find me trolling a large spoon with a Gulp! minnow or live crawler slow rolling behind it at some point during the day. The same lures used for casting can also be used for trolling. A few split shots, a 3 way or inline sinker is often needed to get some lures down into the strike zone. The same spinning rod used for casting can also double as a trolling rod but if I am using anything over 1oz for weight, I will sometimes use a medium action bait casting rod and reel.

Stealthy fishing for brook trout, let alone any trout can make or break a day. Transom mounted electric trolling motors are probably the most efficient way to target back lake brookies. Electric motors have the power to cross larger bodies of water with the capabilities of staying quiet while you’re on brook trout lakes. I run a 36 lb thrust on back of a canoe or small boat or I fish from a Mirage Drive Hobie fishing kayak. The Mirage Drive kayaks are actually power by your feet rather than your arms. A set of pedals can be dropped into the kayak and a rudder is used for steering. This gives me the luxury of basically fishing hands from while still maintaining control of the kayak. Mirage Drive Hobie kayaks are the ultimate stealth fishing machines and is my biggest asset when chasing brookies in provincial parks where no motors of any kind are allowed on the lakes. Using fluorocarbon leads on your line will also assist in stealth fishing and will increase your catch rate. Not only is fluorocarbon invisible to fish under water but it is extremely abrasion resistant. Brook trout love to hang out on rocky shoals, boulder piles and most commonly any kind of wood. All of these areas increase your odds of losing fish due to the structure. Simply add a barrel swivel to your mainline and a 3 foot lead of fluorocarbon to your lure. This will help overcome these obstacles and improve your stealthy fishing. If you find any nicks, scrapes or stretches take the time to change your leader before you get back to fishing. I would much rather waste 30 seconds tying up a new leader rather than lose a big Ontario brookie due to faulty equipment. Trust me I have done it!

Brook trout are definitely my favourite trout for table fare. Selective harvest of brook trout especially from a natural population is a key factor in ensuring the survival of the most beautiful trout species Ontario has to offer. Typically I like to keep fish in the 14-18” range for eating and practice catch and release with all fish over 18” unless I feel like they will not survive. It doesn’t matter if you deep fry, pan fry, grill, broil or even smoke. Brook trout are an excellent choice for your next fish dinner!