Many times over the years we have been asked, “What makes you guys so successful at catching walleyes?” These days we like to smile, point out the graying hair and say something like “Experience …. We’ve been doing this a long time.”, and to a certain extent that is a big part of it. A bigger part, to be honest, is the fact that we are very competitive individuals. It’s a trait that drives us; not to beat other anglers, but to beat the walleyes at their game. The fish are our true adversaries, and we simply love to compete against them every chance we get. Of course there are many other things that come into play as well, including the equipment we use, and few pieces of equipment allow us to perform at our best more than the boats we run. To a walleye fisherman, the boat plays a key role in not only getting out to the fish, but it’s a major part of most presentations used to catch these fish.

We have been very lucky throughout our careers to be able to be involved in the designing of many of the boats we’ve run. There have been some exciting innovations that we have had a hand in bringing to the market in the past and that aspect of our jobs is among the most rewarding. That’s probably why we are so excited about the new boat we’ll be running in 2013. The Nitro ZV 21 is a Beast in every positive sense and is going to go a long way to making every angler that fishes from it a walleye’s worst nightmare! 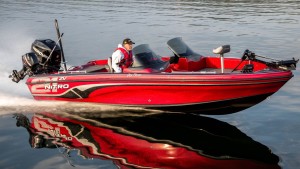 Gary Parsons running the boat:
To a walleye fisherman, the boat plays a key role in not only getting out to the fish, but it’s a major part of most presentations used to catch these fish.

The beauty of working on a project like this is that we got to start from basically a clean slate. From there, we decided we wanted to build a boat that met some key challenges that walleye anglers had been facing with boats that were currently on the market. First and foremost the boat needed to be a good runner in rough water, so we took the basic hull shape from one of the fastest and best rough water boats we’d ever run, the Tracker Tundra, and incorporated that into this fiberglass boat. Then the design team was able to tweak the hull configuration (chines, strakes, etc.) for even more optimum performance and make it wider (100 inch beam) to make it an incredibly stable fishing platform compared to the Tundra design. The end result was a 21 foot 7 inch hull that performs better in rough water than any boat we’ve ever run.

One of the biggest challenges in designing a walleye boat is creating fishing space in the main deck area of the boat. Trolling in big water is a technique that demands anglers have room to move around, and in the ZV 21, the gunnels were designed in such a fashion as to increase floor space by some 5 to 6 inches. That’s a huge advantage considering that in most walleye fishing these days, 50% or more of the techniques involve trolling and utilizing the main floor space are of the boat. That also means that a great deal of an angler’s time is spent standing in that area of the boat, and over the course of a long day, that can be tough on the legs and back. The Z series of Nitro bass boats had addressed this issue for bass anglers by using padded carpet in the bow area of the boat, so we asked if the ZV 21 could have padded carpeting in the main floor area and they said “Absolutely”. Take our word for it, you won’t believe the difference it makes after a long day of standing on deck.

Rod storage is always a major consideration when designing a walleye boat. Walleye anglers use such a wide array of tactics and therefore need to have the ability to carry a wide variety of rods and reels to fish those tactics. The ZV 21’s 4-teir center rod storage compartment is cavernous and can handle rods up to 8’ 6” in length. With a little organization, it’s not at all difficult to store 20 or more rods in the compartment.

Another rod-storage challenge we ask the design team to consider was how to store longer jigging rods on the front deck when running. Seems there has been a trend the past few years to use longer jigging rods, and when you go to move from one spot to another, storing those rods on the front deck typically means you’re left with rod tips hanging over the side of the boat, susceptible to breakage and tangling. The ZV 21 features a neat rod-tip sleeve system in the passenger side console that safely allows you to store rods on front deck while running.
Ask most walleye anglers what is one pet-peeve they have when fishing and no doubt a good number of them will mention the fact that there just never seems to be a good place to store the landing net in their boat. The ZV 21meets that challenge by providing a convenient net storage cradle alongside the passenger seat gunnel area. With the net handle tucked neatly under the passenger console, and the hoop set in the cradle, the net is out of the way but within easy reach when needed.

Perhaps one of our favorite features of the new Nitro ZV 21 is the driver’s console. We’ve all seen how graphs and GPS units have gotten bigger the past couple years. The challenge we presented to the Nitro team was to design a console that would allow us to mount 2 – 10 inch units on the console in a fashion that still allowed us to keep the units in our site-line and see all the gauges and be able to easily see over them while we were running. Many walleye anglers these days like the 2-unit set up so they can dedicate one unit to sonar and one to GPS/Mapping. It wasn’t as easy as it sounds, but the ZV 21 has the neatest driver console of any boat we’ve ever encountered. You really need to see it to appreciate it.

There are so many other great features that make this boat stand out including the heavy-duty rail system along the gunnel that’s great for mounting rod holders, the 65 gallon main tank and 5 gallon kicker tank to ensure you have the fuel to cover all the water you want to, and the patented 26 gallon Guardian™ livewell system that’s the best we’ve ever seen for protecting you catch. The boat also comes wired for a 36 volt trolling motor, so you’re sure to have the power to maneuver the ZV 21 on the toughest contours.

Getting to the fish is no problem with the Nitro ZV 21 either. It’s Fast! We’ll be running our ZV 21’s with Mercury 300 HP Verado Pro FourStroke engines; the ultimate in big water boat performance engines. But the boat’s design is such that even with the standard 250 hp OptiMax that the boat is packaged with factory direct, its performance as far as hole shot and top end is outstanding. With the 300 Verado the boat will easily hit 60 mph fully loaded, and still run in the mid 50’s with the 250 OptiMax. The transom on this boat is rock-solid too, so running these big engines is not an issue.

Make no mistake, the ZV 21 is a big water boat, but we don’t always fish big water. The boat’s hull design allows it to fish like a much smaller boat. By that we mean the boat tracks extremely well whether it’s being pulled by the bowmount trolling motor or when trolling with the kicker. The response is nimble and precise; an essential characteristic for any walleye rig.
As professional anglers, our boat represents our office. We take a great deal of pride in running what we feel is the best boat built. For the serious angler looking to invest in a boat that will serve him well we feel the Nitro ZV 21 is a homerun. It truly is a fisherman’ dream … and a walleye’s worst nightmare.

Editors Note:
If you have questions or comments on this or other articles from Gary Parsons and Keith Kavajecz, visit their website www.thenextbite.com.

Photo Captions:
Gary Parsons running the boat:
To a walleye fisherman, the boat plays a key role in not only getting out to the fish, but it’s a major part of most presentations used to catch these fish.