What triggers walleye to feed?

Do you ever think about your eating habits and how they relate to fishing? If you do, then you obviously are our kind of people! If not, you should, because such observations can help make you a better walleye angler. As humans, our eating habits are really quite predictable … breakfast in the morning, lunch around mid-day, and dinner in the early evening. There are those instances however that trigger us to eat when we might not ordinarily do so, like when someone walks in the office with a chocolate birthday cake, when we catch the aroma of freshly baked cookies or it could be the unexplainable urge to munch on popcorn every time we enter a movie theater. There are certain triggers, be it smell, sight, or a specific set of circumstances that initiate our urge to eat when we normally wouldn’t. (Are you starting to see how this relates to walleye fishing?) 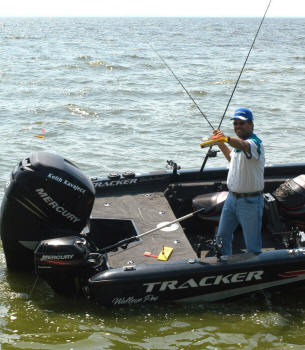 Walleyes experience these types of triggers too. There are times when fish can be characterized as being in a “neutral” mood (not in an active feeding mode) only to be tempted by some outside influence which triggers an irresistible urge to eat. Knowing these “feeding triggers” give us more tools to get in on some fantastic fishing. That is, provided you learn to recognize the conditions that can create such opportunities, and use the right presentation.

Summer means walleye feeding activity in most bodies of water is going to be near its peak. This is a time when fish tend to feed more aggressively than other times of the year. That means aggressive lure presentations like trolling crankbaits can rank high on the list of successful walleye tactics. Understand however, that choosing the right style of crankbait is a key part of the formula. In the warm water period, cranks with a moderate to high action get the nod as opposed to more subtle action models that are better suited for cool water periods. Typically baits with bigger lips, more aggressive actions that emit more side-flash and lures that feature rattles are better summer lures than the small-billed, shallow running baits popular in early season tactics. Higher action lures can draw fish from a distance and stand out when competing with other, more plentiful natural forage options.

Weather is absolutely one of the most influential factors in predicting a good walleye bite. Stable weather means active fish. It’s virtually the same whether you’re talking walleyes, muskies, or even pike. Stable weather is typically described as three or more days of mild conditions without any fronts moving through; however it doesn’t mean that is the only stability that will get fish biting. If you get three or four back to back days of cloudy, windy weather chances are the fish are going to go on a bite. The irony of it is that the peak period in this feeding window of opportunity usually occurs just prior to the next front moving through or a new high pressure system arriving. The short time before the weather change is when the fish often get the most active. The lesson here is to keep a close eye on the weather … not just on the day you plan to go fishing, but over the course of several days at a time. It won’t take long for you to begin seeing the patterns develop, and by paying attention, before long you’ll be able to better predict active feeding periods and prime times to be on the water.

Forage availability is another major activity trigger that anglers can use to predict a good summer bite. Many a day we’ve cruised across the water on a calm and warm summer day, only to suddenly find ourselves plowing through clouds of an emerging insect hatch, and swallowing more protein than we’d care to. However, as unpleasant as the initial encounter might be, running into such an event can make for great fishing. Insect hatches cause a boom in the forage base. The water becomes filled with hordes of luscious bugs, which stimulate the baitfish into a feeding frenzy, and ultimately the predators join in.

When this occurs on our home waters of Lake Winnebago, it’s a good bet that trolling crankbaits high in the water column out over the main-lake basin will catch walleyes. For instance, pulling size 5cm and 6cm Berkley Flicker Shads about 30 to 50 feet behind boards should place the lures in the upper five to six feet of the water column. Spreading the lures out from the boat using Off Shore Tackle OR12 Side Planers reduces spooking from the boat and helps bring more walleyes to the net.

Some of the most classic feeding triggers are those dealing with light penetration. Especially in the summer months, walleyes tend to be most active during low-light periods, especially in clear water lakes and rivers. Concentrating your efforts during the early and late parts of the day, on cloudy and overcast days, and on those days when wind is breaking up the surface of the water cutting down the amount of light penetration (the quintessential “walleye chop”) will up the odds of a good catch. One thing to keep in mind is that even though you may be fishing during a low-light period, that doesn’t mean you’re fishing active walleyes. Oh sure, the fish will be active somewhere on the lake … you just need to make sure you’re in the right place at the right time. It’s the old adage; ninety percent of the fish will be found in ten percent of the lake. Always work on finding the concentrations of fish, then when the walleyes are triggered into activity, you’re chance of success greatly increases. That will place you right in the middle of another old adage; ten percent of the fishermen catch ninety percent of the fish!

Feeding triggers can take many forms, and in most cases are relatively short in duration. That makes predicting and recognizing them difficult, and being in the right place at the right time to take advantage of it even more challenging. Keep an open mind as to what constitutes a feeding trigger and learn to recognize prime fish feeding opportunities when they present themselves. Just remember, there will still be the odd instance when you find yourself in the midst of a “mother-lode” school of walleyes, but the triggers are just not there to put the fish in feeding mood. Its times like that when you may need a total change of tactics in order to trigger your Next Bite … sort of like baking a batch of fresh cookies … but that’s another article.

Editor’s Note: If you have questions or comments on this or other articles of ours you may have read, contact us through our website at www.thenextbite.com .

By
Keith Kavajecz and Gary Parsons