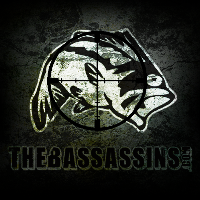 After a few weeks of slower morning runs Basstard and I convinced the wives to let us run out for a little evening experiment. We were itching to fish with some sick drop shotting soft plastics that our friends at FishHound had sent us. I picked Basstard up at his place and headed off to a spot we knew would be holding some nice fat fall smallmouth. This system is a shallow running flat that leads out into a deeper pool with a constant flow of water.

During summer we spend our days fishing the shallows for big independent bass but in Fall they all seem to run to the deeper water and bunch up together. We hit the water around 4pm on Thursday, the weather was incredible 16 degrees, sunny and no wind – perfect fall day! As we hit our location we walked the shore lines scouting out before making a cast and could see the bass running up in close to shore picking dinner off of the shallow rocks. A quick gear up and we both toss out our drop shots into the near edge of the current. It wasn’t long until we were both into fish, I do need to admit Basstard dominated the first hour of this game – drop shotting is not my forte but Basstard is a pro – our new soft plastics where doing the job.

A little after 5pm however we both started to notice that along the stretch all of the bass seem to have disappeared. We weren’t spotting anything and hadn’t had a bite in a little while so to give the stretch a little rest we decided to head up a little higher above and see if we had just pushed them upstream. On our walk up we were talking and Basstard said maybe we need to switch to something a little bigger to see if something had scared all the bass away other then us. So in taking my spin casting yoda’s advice I put on my XCS shallow crank and threw it far out angled to the area we had just been fishing – not making this up it was honestly the first cast – lure hit the water and I give it a couple of quick jerks to drop it down and started to reel. BOOM ROD BENT! I look over to Basstard and said something smart ass like “well I guess that worked” but I didn’t know how incredible the next 5min would be. After no surfacing and a couple of hard runs I knew it wasn’t a bass but had figured I was into a decent pike – we had bumped into a few here over the summer but nothing crazy. Then whatever was screaming my drag stopped doing much of anything and I started to reel in, back up onto shore. 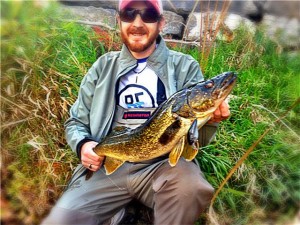 Basstard at this time – being the best wingman ever – goes the other way into the water to have a good play at handing whatever this was. What came to surface both put a shock on our face and ran a cold chill of urgency down my back knowing I had to land the biggest fish I had every caught and soon before something unpredictable happens. After one last attempt to run Basstard, with GoPro in hand, reaches down and gills the beast handing it directly over to me. The laughter and cheers and high fives were FLYING! HERE IS WHAT WE LANDED on our experimental evening run…. This 32inch Walleye is not only my personal best eye but the biggest fish I have ever landed. A quick, educated change of tactics and some incredible team work resulted in one of the greatest moments of my fishing career. A night that will not soon be forgotten but hopefully surpassed. Thanks for sharing this with me and enjoy the EYE CANDY!!! BOOM! Video of the catch at www.thebassassins.com