About The Tiger Muskellunge 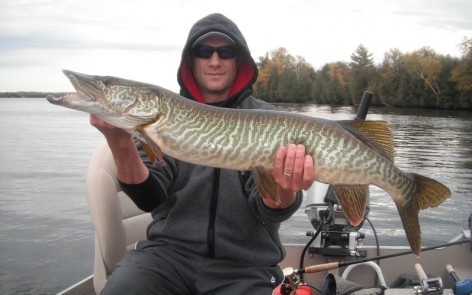 The tiger muskellunge is a freshwater fish found in Canada and the northeastern and Midwestern portions of the United States. It prefers quiet lakes and rivers such as the Ohio River, St. Lawrence River, Upper Mississippi Valley, and the Great Lakes.

The tiger muskellunge is a hybrid offspring of the northern pike, or Esox lucius, and the true muskellunge, or Esox masquinongy. It is a carnivorous fish and because it is a hybrid, it is usually sterile. The tiger muskellunge has characteristics of both the northern pike and the true muskellunge. A tiger muskie has a light background with vertical dark stripes. Its pattern can have a variety of colors but it rarely matches that of a northern pike. As with most hybrids, the body appears much deeper than the bodies of either parent. The caudal fins of a tiger muskie are more rounded than those of a true muskie, plus the tiger has ten to sixteen pores on its lower jaw.

The tiger muskellunge grows at a much more rapid rate too. One study reported that the tiger muskie fish grew 1.5 times faster than true muskellunge. Trophy specimens grow as large as thirty pounds. They subsist mainly on small birds and other fish. The tiger muskellunge has quite a voracious appetite and prefers to dine on larger fish such as walleye, small mouth bass, yellow perch, and golden shiners.

The tiger muskellunge doesn’t venture far from its home waters. These fish can be found in the same areas of a lake each year. They prefer to stay in water that is six to nine feet deep during the summer and fall months. In spring and winter, they move to waters that are fifteen to thirty feet deep. They, along with true muskellunge, are dubbed the ‘fish of ten thousand casts’ because they are so challenging to catch.

Tiger muskies are popular stock fish so their breeding and growth has been carefully studied. The water temperature and type of food they eat plays a big role in how rapidly they grow. It has been found that tiger muskellunge has the best growth rate and food conversion in water temperatures of 68 to 75°F, or 20 to 24°C. When temperatures fall below that, the fish become cannibalistic and their growth rate slows. When breeding tiger muskellunge, breeders usually prefer to use female muskellunge and male northern pike to get the best results. This mix produces eggs that are not as adhesive and clumpy when it comes time to hatch.