The Land Of Giant Walleye – Anjigaming Lake Fly In

Most of my trips are planned months and months in advance, but occasionally I’ll fly by the seat of my pants. These unplanned, unexpected trips are oftentimes the best.

Not that long ago I was approached by two board members, Rick and Julian (RickOnt & jds63) to see if I had any interest in joining them on a short fly in trip. While I’d never met either one of these fine gentlemen I’d shared a fair amount of correspondence with them and knew they were both solid guys.

A quick check on my calendar and the okay from Joanne to head north yet again and I was in. Only two factors needed to be ironed out. A fourth person to complete our roster and a destination.

Doug happily jumped on board solving the first issue. I’ve been on a bunch of trips with Doug over the last few years and he’s a perfect compliment to any trip. Great guy.

The next and biggest issue was where to go. We only had 5 full days to play with so a trip to Nakina or beyond was out of the question. As many of you know I’ve flown several times in recent years to the Chapleau Game Preserve with Martin Wearn of Park’s Fly In Fishing.

Coming from southern Ontario this region is a favourite of mine. The drive is reasonable, the fishing has always proven to be excellent, and the scenery is spectacular. A call to Martin confirmed that his outpost camp on Anjigaming lake was available so we quickly booked. I’d been to Anjigaming once before 3 years ago and enjoyed a banner trip, catching both numbers of walleye and some larger specimens to boot.

Martin informed me that he’d made a few improvements to the camp in the interim. Two brand new boats, an extensive solar sysytem with electric lighting and hot and cold running water, and a fancy new airtight woodstove.

I’d have booked the trip regardless, but this made the decision even easier.
To top things off we’d now be flying out of Chapleau as opposed to Hawk Junction. This is a pretty big deal because coming from southern Ontario it cuts a substantial amount of time off the drive.

So with the stage set we all met at Doug’s place in Barrie on a Tuesday night, quickly packed Doug’s truck and were on our way. I’m normally not a huge fan of driving through the night, but work was busy for most of us, so we had no other option.

The drive up was a breeze with most of us napping enroute. Arriving in the wee hours of the morning we were a bit bedraggled and not exactly refreshed, but each of us was pumped about the trip and raring to go. (Adrenaline and nuclear strength coffee will work wonders).

The morning had dawned clear and cool, a harbinger of things to come as the weather forecast was utter perfection.

Checking in at the float plane base we quickly unloaded and had our gear weighed and piled on the dock. 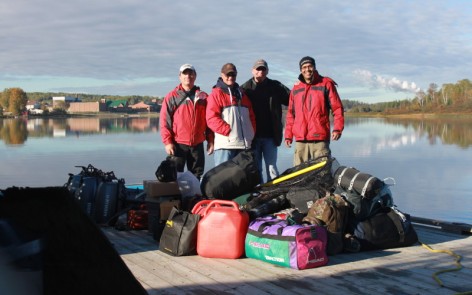 Our pilot Dennis had one short flight scheduled ahead of ours as he had to drop two geologists off on a nearby lake. Apparently there’s gold in them thar hills.

He spent a bit of time taxiing up and down the river to warm up the old Beaver float plane and was soon airborne.

After a roughly 20 minute wait we heard the drone of the plane approaching. Dennis quickly landed and tied off to the dock, our ride was here. 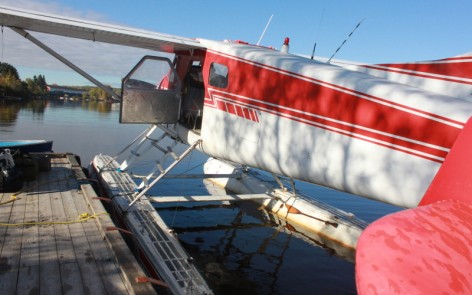 The guys were pretty pumped, especially Rick as this was his very first fly in trip. We quickly had the old girl loaded and hopped on board with Rick being awarded the copilots seat up front due to his newbie status. For me, while I never tire of these trips, I’ve done so many over the years that in many ways they’ve become old hat. Having Rick along, and Julian for that matter too was great. They were both bubbling over with excitement and it was contagious. Sometimes it’s nice to see things through someone elses eyes. It gives one a different perspective…

We were soon airborne and on our way, skimming over a vast panorama of rivers and lakes heading deep into the heart of the wildlife preserve. 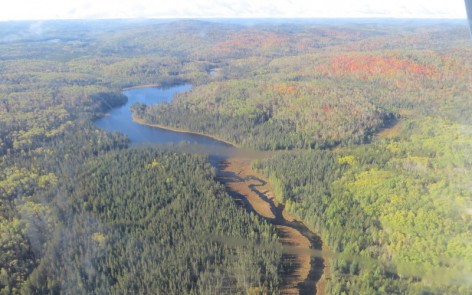 Landing on Anjigaming lake was like meeting an old friend. It still had that same wild feel, sparkling waters, spruce capped islands and a cozy little camp tucked into a bay on the west shoreline of the lake. It was great to be back. 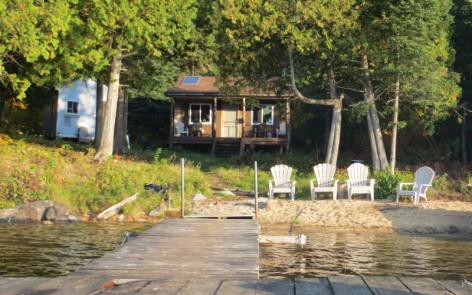 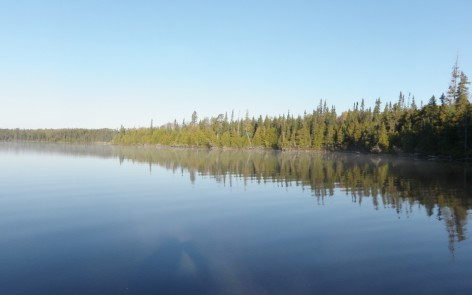 After unpacking we quickly had the boats loaded, our gear assembled and we hit the lake. Doug and I in one boat, Julian and Rick in the other. It wasn’t an intense fishing session that first day as we leisurely explored the lake catching fish almost everywhere we stopped.

None were large that first day, but they were abundant and not overly picky. 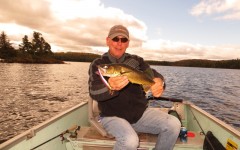 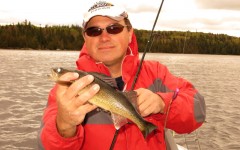 We each kept a handful of small eater sized fish for a fry that evening and toasted our first days success while the sun sank low in the sky. 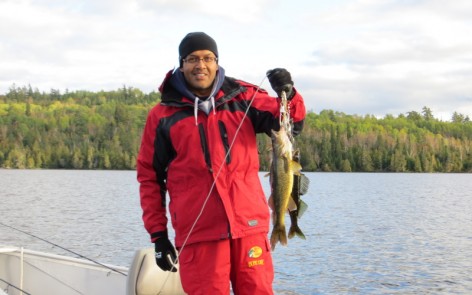 Sometimes I wonder why I love fishing for walleyes so much. Beyond the fact that they taste good they’re not exactly great fighters. Unless of course you enjoy reeling in the finned equivalent of a drift sock.   I’ve come to the conclusion that it’s the challenge. Oftentimes, even on remote waters larger fish can be elusive and I relish the task of cracking the code. It’s like solving a puzzle.

The next day Doug and I dedicated ourselves to cracking that code. In my experience walleye, especially larger ones, tend to go deeper in the late fall once turnover has occurred. With that in mind we worked much of the deeper structure in the lake using a variety of methods. All to no avail.

While the other boys were happily working the shallows and consistently catching smaller fish Doug and I drew a blank. Oh we caught fish here and there, but nothing close to the numbers the other boys boated. 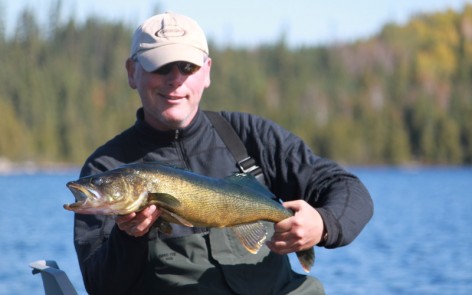 I guess the highlight for the day in our boat was a long skinny pike that Dougie managed that truly did live up to the name “snake”. 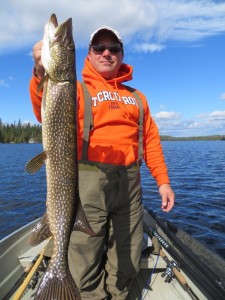 On the other hand I know that despite the still smaller size of the walleyes the boys had a great day. 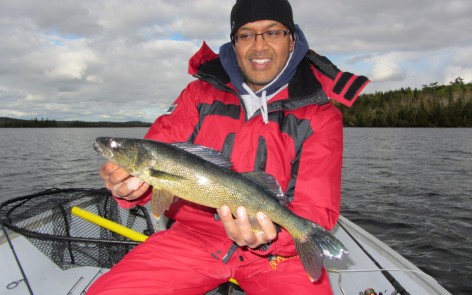 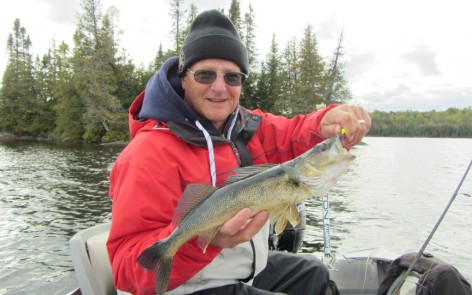 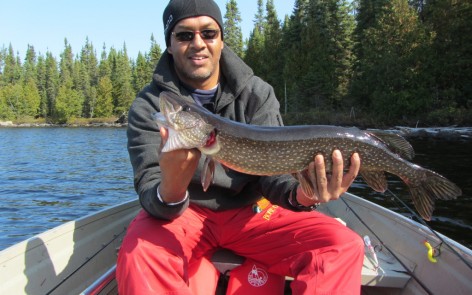 Our second full day was another beauty, cold, with a heavy mist that clung to the lake. 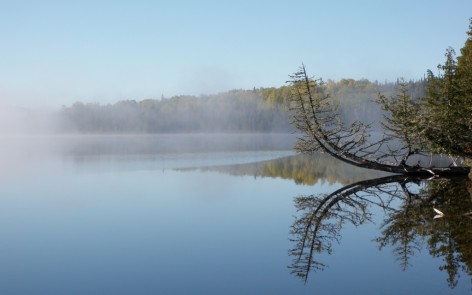 It soon burned off and we were once again bathed in glorious sunshine. 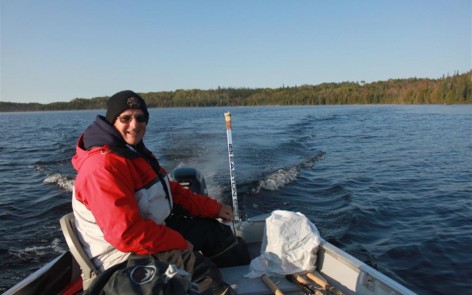 I still wasn’t deterred in my quest for larger fish. As I said to Dougie, “I know they’re there, there’s just something we’re missing. Sooner or later we’ll figure it out”.

The day before I’d spent a fair bit of time prospecting for fish in 35-40′ of water using 4oz bottom bouncers and worm harnesses. Mixed in between we tried a fair bit of vertical jigging as well.

The only thing we’d really not done yet was plumb the edges of the deepest basin. This particular trough bottomed out at 80′ and around noon we stumbled onto an enticing piece of rocky structure adjacent to it.

It was a more or less featureless flat that topped out at 18′. Way out in the lake however following my graph and trying to get a feel for the structure I stumbled onto something.

That flat suddenly dropped into 30′ and not long after into 40-50′ of water. The difference and what made it interesting was twofold. First the bottom was unbelievably irregular littered with rocks and boulders. Second as mentioned it was adjacent to the deepest basin in the lake which I’m sure held massive amounts of soft finned forage.

The previous day while we’d worked deeper structure it wasn’t rocky structure and that was the key.

Rigging up with oversized 5/8oz heads and a variety of different plastics we drifted slowly over the deep structure and it was like turning on a switch. We’d finally found some better fish!

I started the proceedings off with a chunky 281/2″ fish and my relief was palpable. 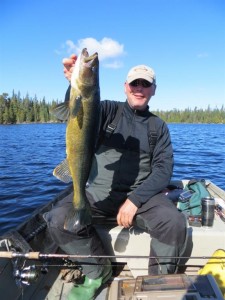 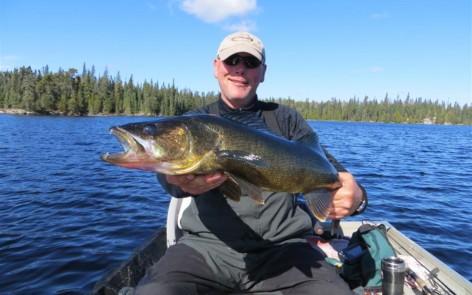 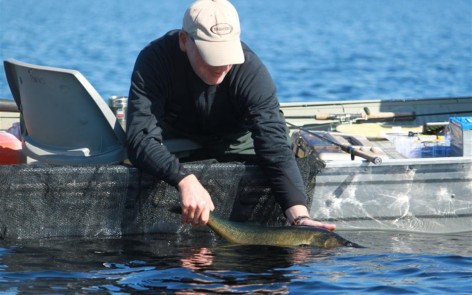 In no time it was game on and everyone was into fish.

Can you tell Rick is a bit excited here? LOL!

Doug lands a chunky one here out of 50′ of water. 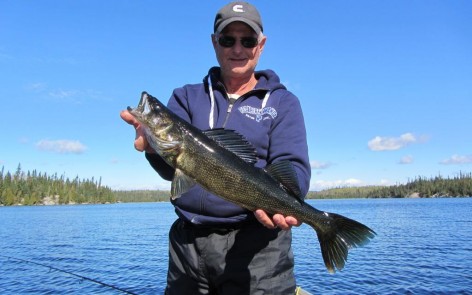 While we had our ups and downs over the next couple of days it was mostly ups with a great many quality walleye being caught by everyone.

Here’s a bunch more video that shows the action better than any picture ever could.

This is kind of funny, there’s a story behind it. Back in my guiding days I had 3 guys in the boat with me from Oshawa one of whom owned a hydroponics growing store and looked like Hyde from That 70’s Show. Every time this guy would hook a fish, whether big or little he’d yell LUNKER! at the top of his lungs.

Of course the guys thought this was a hilarious story and proceeded to do the same themselves. We really did have a great time. 😀

Now this, this was something special. I set the hook into an absolutely huge walleye here. Much of the battle was caught on video and my excitement is obvious. Unfortunately she got unbuttoned shortly after Doug turned the camera off to help me land it. I hate to speculate about these things but I’m convinced this fish was 12lb’s plus.

Despite the lack of a fish I think this clip is pretty cool.

Been saving the best video for the end. On our very last afternoon Julian had a day for the ages with three personal best fish in a row. The third fish was a remarkable 30″ specimen that I’m sure he’ll remember for a very long time. 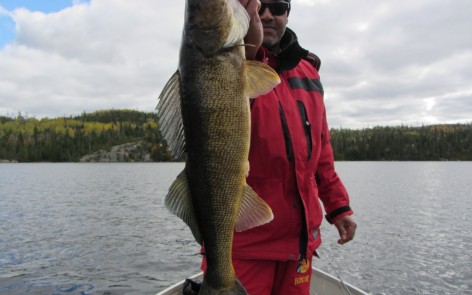 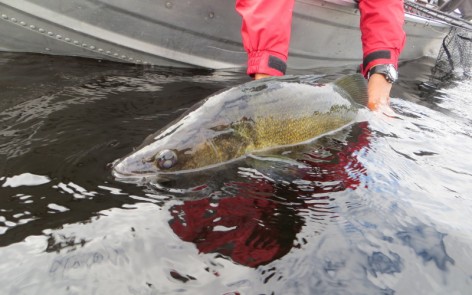 I always like to do a short video tour of the outpost camp on these trips. It’s a valuable resource for anyone who’s considering booking a trip. Frankly I wish more people besides me would do it when they post their reports LOL!

In any case here it is. Please excuse my sniffling I was battling a brutal sinus cold at the time.

For such a short trip it honestly couldn’t have gone any better. The weather was spectacular, the fishing was outstanding once the pattern was figured out, and best of all it was a great bunch of guys to hang out with for a few days.

It’s safe to say I have two new friends in Julian and Rick. Thanks guys you made the trip a real success and I’m looking forward to doing it again.

A thanks to Doug as well, you’re a great boat mate my friend. Next time can’t come soon enough!

And a final big thanks to Martin Wearn of Park’s Fly In Fishing. Another outstanding trip in the books, and the improvements to the camp were duly noted and greatly appreciated. I’ll be back next year for sure!

I’ll end things with this short video of our plane landing on Sunday morning to pick us up.

Once the sun had burned off the morning mist it was a stunning day. Absolute perfection just like the rest of our trip. 🙂