Although best known for his dexterity with a square bill crank, B.A.S.S. Elite Series Tournament touring pro Kevin Short also loves to swim a jig—especially in the spring. “I’ll fish a swim jig from pre-spawn all the way through summer. Its versatility is unmatched,” says Short.

And when big money’s on the line and every second counts, Short has found high reps with a swim jig can build lean green muscle—fast. “The right jig and trailer is going to get hung up a whole lot less than a spinnerbait. And you don’t risk busting wire on big fish. There’s just a whole lot less to go wrong,” says Short.

Given early-season bass are chasing bluegills off beds and taking full advantage of easy calories in the form of vulnerable, spawning shad, swim jigs allow the angler to match forage and cover a lot of water fast without the hassle of hang-ups. 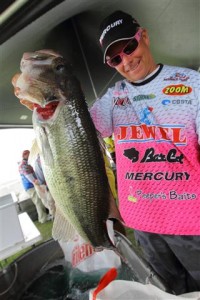 Short glasses fish-holding waters with the skill of a bounty hunter. His knowledge of bass behavior, specifically the pecking order that exists between bedding bass, allows him to eliminate dead water fast.

“Seems like the biggest males and females bed on the first or second point or flat inside a pocket. There may be fish bedding in the back but typically they’ll be the smaller fish. The biggest, dominant fish position themselves closest to the big water,” says Short.

But Short will go farther into the pockets when he sees spawning shad. “The swim jig can really produce in early morning when shad are up spawning in the bays,” says Short. “And as the day wears on they’ll get bit when bass want something a little more subtle and won’t necessarily chase blades.”

As with any search presentation, Short varies his retrieve from the get-go to figure out what the fish want. “Sometimes I’m working that jig across the pockets as fast as I can. Other times I’m swimming it up and over stuff and letting it fall down into holes in the grass or in between bushes,” says Short.

Short’s also a fan of see-through skirts. “I’ve found that thinner skirts work better on swim jigs. For super-clear water you can trim it down right at the bend of the hook for a few more bites, but for the most part I just throw a trailer on and chunk it,” says Short.

Along these lines, another strong contender is the similarly scantily clad Terminator Swim Jig with wire trailer keeper and 30-degree VMC hook.

Depending on the situation, Short will switch up his swim jig presentation by choosing from two different classes of trailers—bulky swimming trailers and subtle Fluke-style trailers, which vary in vertical and horizontal action, respectively.

“There are times when I’ll use a fat trailer like a Zoom Super Chunk ‘batwing’ for a lot of thump and vibration. It has more of an up and down action. That’s my choice for running really fast just under the surface or up and over stuff, followed by a drop into the pockets,” says Short.

For buzzing right up on top, Short will switch up to a swimbait-style trailer like the Zoom Swimmin’ Super Fluke. “During a surface bite a really wide thumping side-to-side trailer works best. I can drag lily pads and other emergent stuff right up on top,” says Short. “Plus a straight Fluke-style trailer can be the hot ticket in grass or bushes. I can work it through cover like butter in a hot biscuit.”

If Short has a mantra, it’s “keep it simple”—even when it comes to choosing from the hundreds of trailer colors currently available to anglers. “In dirty water I really like black and blue, and in water that has just a little stain to really clear I’ll go to a bluegill color or a shad white and silver,” says Short. “If you open up my box, I have basically three colors: green pumpkin, a watermelon and chartreuse mix and white silver gray.”

Short is known for his adeptness at choosing the right rod for the task, whether it’s using shorter rods for target casting cranks or his strong opinions (and performance record) on the benefits of fiberglass sticks.

“The right swim jig rod is essential,” says Short. “I like a longer medium-heavy rod with fast to extra-fast action like the new St. Croix Rage 7’1” RC71MHXF. Not only does this rod give me the casting distance and leverage I need to pull those fish out of the junk but it’s light and comfortable, something that definitely comes into play when I’m chunking hours at end,” says Short.

Short is quick to point out that swimming jigs isn’t limited to early season.

“You can catch fish from pre-spawn all the way through fall if there’s some kind of cover that the fish will stay around. It’s not just a spring thing, although it’s versatility and look is killer for producing the biggest fish of the early season,” says Short.