Late spring into early summer is quite possibly the best time of the year to catch some unreal numbers of pike. Although most of the big fish have ventured to deeper, cooler waters many of the midsized to smaller pike can be found actively feeding shallow often throughout the entire day. The following are tips to help you catch better numbers of summer pike!

Work The Weeds
Weeds beds or more specifically cabbage weed beds are without a doubt my favourite areas to try and fool a few pike or ten. There are always pike hanging around looking to ambush anything in sight. Typically by summer, hammer handles are predominately hanging out in the shallower weeds patrolling for any baitfish that dares to show their face. Although there’s always the odd big pike rolling in from time to time especially during low light conditions. A top summer producer for me is spinner baits. They are always a great choice for working heavy cabbage. On days pike respond with obvious aggression, nothing beats burning spinner baits just under the surface. On days when fish seem slightly less responsive, slow roll spinner baits through the weeds can be the ticket. Even adding a twister tail can trigger a few extra strikes. Hooking a weed is simply fixed with a quick snap of the rod tip and they can be fished pretty much weed free. Another reason spinner baits are a great choice is the simple fact there is only one hook. It is so much easier to unhook and release pike with single hooks. Not only is it safer for the fish but for you and the other anglers in your boat. Another must for weed bed pike fishing is a big Williams Wobler. There is something about a Williams that just drive pike insane. Experiment with colours. I use a lot of prism tape on my spoons and have become quite fond of gold and orange Williams for the toothy predators. It’s my confidence pike spoon, hands down. 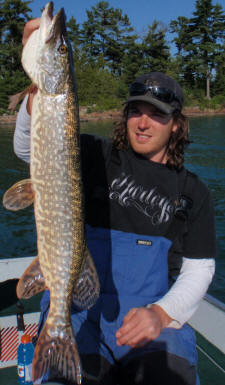 Fish Rocky Areas
Rocky points, humps, boulder ridden shorelines, bays and pretty much any cluster of rocks on any given body of water with pike will more than likely have pike hanging around. These are areas, I like to use jerk baits and cranks. Slamming them off the rocks is quite often too much for any pike to resist. Although slamming your baits off the structure is a deadly technique, I’ve caught just as many if not more on a suspending lure. More specifically, a suspending jerk bait. Jerk baits can be cast and trolled with high success rates. I usually opt to cast rocky piles, points or any isolated rock. I like to make my cast at least 10 feet further than my intended target. This helps to keep you away from spooking the fish and it also gives you a few seconds to prepare for the strike. It is much easier to troll a long, rocky shoreline or a large bay with big boulders scattered all over.

Go Deep For Size
Summer is here which means pike, well big pike move out deeper not only for forage but to seek cooler water temperatures. Surprisingly enough, big pike are quite temperature sensitive and won’t typically be found shallow very often during the summer. There will be occasions when you will see monster pike shallow but the majority of the time but most big pike are deep during the warmest months of the year. The bigger pike will be feeding on ciscoes, whitefish, perch and walleye so colours relating to these species work well. Run big or even giant deep diving plugs like husky jerks and X-raps and get them down 15+ feet. Bonus big summer walleye love them too!