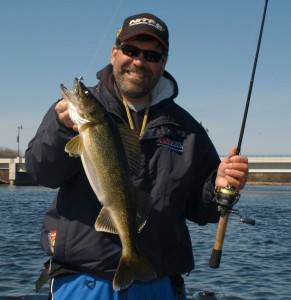 Vertical Jigging is most often associated with fishing in rivers, but when “lake” walleyes are locked on very specific spots this tactic can be your best bet for getting bites.

It’s not difficult to tell change is right around the corner. The days are getting shorter, temps a little cooler and the walleyes are getting tougher to find. It’s one of those transition periods that takes place every year signaling the move from summer to fall. Summer fishing tactics are no longer catching many fish; covering flats and open water with wide spread sets and semi-random drifts and trolling passes just isn’t going to get it done now. The walleyes aren’t roaming anymore. They’re moving to more specific locales, toward structure … tight to structure. You’re more likely to find them on those sharp breaks, tiny fingers and boat-width sized cups that define classic “spot-on-a-spot” walleye habitat. It’s time to find and fish the sort of spots that separate the good anglers from the masses.

The plan is a familiar one; find the fish and catch them. However, the execution of the plan is what makes an angler either successful or not-so-successful. To have success takes keen observation and precise presentation. Some say it takes years of experience on a body of water to know “the key” spots and fish them effectively, others conclude there’s a Zen-like sensory perception needed to find walleyes and catch them consistently during this period. Truth is neither is true. Understanding how to use your fish-finding and boat control tools are the keys to catching walleyes now.

At the risk of sounding a bit like a broken record, your electronics, specifically your sonar and GPS, are crucial tools to finding walleyes. This is especially true when it comes to late summer, when walleyes move to defined and often hard-to-find pieces of structure. Most of the time you won’t be marking fish separated from the bottom like you do when fish are active in the summer. This time of year the walleyes tend to be less active, so instead of looking for “arcs”, you will be scanning the bottom for “bumps”. This is when a good locator can really make a huge difference.

Lowrance’s HDS units are changing the way anglers see below the surface, and make this type of searching so much more efficient. These locators and GPS units take fish finding to a whole new level. Something we have learned using the HDS-10 and HDS-8 units this past couple seasons is that by going into the menu and increasing the unit’s Ping Speed to 100%, and setting the Scroll Speed to the 2X setting, we can easily search structure and clearly mark fish at speeds in the 20 to 25 mph range. That goes for both suspended fish as well as bottom huggers. This ability alone substantially increases an angler’s effectiveness at eliminating unproductive water and more efficiently finding fishable schools of walleyes. Another technology available for these units that is of great benefit to walleye fishermen searching structure is Lowrance’s StructureScan™ which includes both SideScan and DownScan technology. Since hitting the market, this technology has definitely changed the game with regards to not just finding these key structural elements, but really learning to understand what key structures hold walleyes.

Of course finding the walleyes is only part of the battle. The tactics you use to actually catch the fish will be determined by the type of structure you find them on and how those fish are relating to it. That in turn will determine the type of boat control needed to put the baits where the fish will bite. During this late-summer period, that typically means fishing small, well defined spots with vertical style presentations. For instance, you’ve located walleyes in 35 feet of water relating tightly to a finger jutting off a main-lake point. Presentations such as jigging or live bait rigging are going to be your best bet for extracting walleyes in this scenario.

Vertical Jigging is most often associated with fishing in rivers, but when “lake” walleyes are locked on very specific spots this tactic can be your best bet for getting bites. Vertical jigging in this situation has two advantages; 1. It allows you to precisely put the bait right in front of the fish and, 2. You can invoke action to the lure to trigger bites from reluctant walleyes. When dealing with walleyes in a “less-than-active” feeding mood, few actions will trip their trigger more than what’s called “rocking the jig”. To do this, get your jig right on the bottom and slowly drag it along until you feel it up against a rock, then slowly and ever-so-slightly lift and let off, lift and let off, being careful not pull the jig over whatever it’s up against. The best jig style for this is a semi-stand-up or stand-up style jig. In fact, the unique stand-up style head of the Fin-tech Nuckleball Jig allows you to invoke this ”rocking” action to the jig without having it lodged against something on the bottom. It’s a subtle action and not easily mastered, but well worth practicing.

There are times however, when the ultimate in finesse is needed to trigger walleyes to bite when they’re in a late-summer funk. A slip-sinker live bait rig, like the jig, allows you to put the bait right in the walleye’s face and keep it there, but in this case you are letting the bait itself provide the bulk of the action and attraction. However, for a leech or minnow to be able to swim around seductively at the end of your line it needs as much freedom as possible. Using too heavy of a hook will greatly inhibit the bait’s movement and effectiveness. Our absolute favorite hook for ultra finesse live bait rigging is Mustad’s Double Wide Fine Wire Live Bait Hook model 10548R. This is a super-fine-wire hook with a wide gap and red in color. The small diameter of the hook’s wire makes it light weight enough for the bait to swim freely, plus it allows for great hook penetration. But this hook is plenty strong to haul in the big ones too.

It doesn’t take a Zen-like state to find and catch walleyes in the transition period of late summer. Understanding the fishes’ movements and utilizing a little modern technology combined with time-tested finesse presentations to find and catch them will go a long way to helping you get your Next Bite.

By:  Keith Kavajecz and Gary Parsons

Editors Note:
If you have questions or comments on this or other articles from Gary Parsons and Keith Kavajecz, visit their website www.thenextbite.com