A delightfully diminutive departure from traditional ice fishing sonar, category leader MarCum Technologies ventured forth last winter with a major concept within a micro package. ShowDown Troller is a high-level portable fish-finder that actually fits into a parka-pocket; literally a smartphone sized device that delivers all the fish and structure finding intelligence offered by its power-laden counterparts. 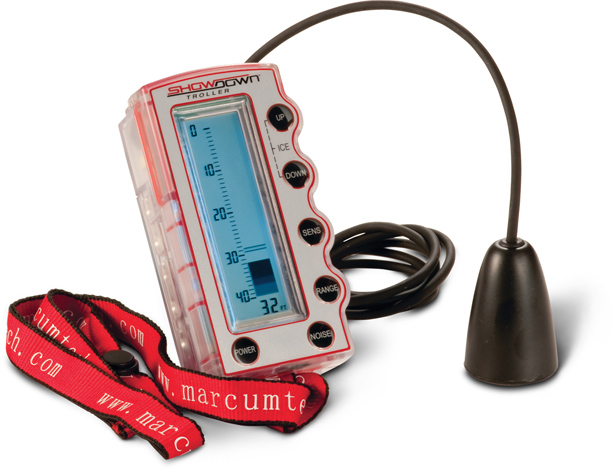 Yet before the Troller’s initial sonar software even entered its final stages, MarCum’s eminent engineers were already delving deeper. How to improve upon something so fundamentally sound, so functionally superior? The answer was clear: ShowDown Troller 2.0.

Endowed with a digitally enhanced mini LCD, Troller 2.0 has undergone a radical upgrade, and done so without even escalating the price-tag. The vibrant new LCD displays depth, fish, lures, structure in staggeringly sharp resolution. This potent little sonar also acquired a virtual “intelligence,” exhibited in an all new Auto Bottom Lock Zoom feature that tracks and magnifies structure so you never miss a bottom-hugging fish again.

“Troller 2.0 is the ultimate micro-sonar unit,” says Ice Force member and professional angler James Holst. “With Auto Bottom Lock Zoom, I can skip from hole to hole, shallow to deep and always stay zeroed in on the money zone—that critical area near bottom swarming with gills and fins, from walleyes and perch to sunfish and pike.”

Exceeding MarCum’s own benchmarks in sonar design and performance, ShowDown Troller 2.0 generates a snappy 4,000 watts of power, and functions continuously for 20 hours on just 6 AA batteries. When used with an optional ShowDown Performance Pack, Troller 2.0 can also run on a 12-volt rechargeable battery for days on end.

Driven by an intuitive push-bottom operating system, the ultra portable Troller displays the water column so clearly that even beginners recognize what they’re seeing. Add in MarCum’s proven, patented 10-level Interference Rejection System and 25-Level Sensitivity, and you’ve got one smooth-running sonar that’s light on its feet.

Troller 2.0 even includes a built-in LCD heater for use in extreme cold. And an Auto Depth Scale function immediately locks onto depth, displaying targets and digital depth from 1 to 120-feet of water. Attached to a 20-degree transducer and 6-feet of cable, Troller provides instant fish-finding data.

“Whether you’re a run-and-gun angler or just like to lighten your load, Troller 2.0 performs flawlessly on the ice,” Holst offers. “It delivers all the goods to serve as your primary sonar. Troller also shines for trips into those remote backwoods lakes. Either way, just drill and dip the transducer.

“Troller is the quickest, most convenient means of mapping structure and locating fish under the ice, and now it’s even better.”