Right about now Sandy is ripping her way north, and as far inland as Ontario out to the Atlantic coast, people are battin’ down the hatches preparing to wait her out. Trees bending outside, waking groggy, coffee in hand, the warm basement fire dries any thoughts of bitter, damp cold. Sitting down at my desk, it’s time to relive last weeks fun, sun and glory during what was the perfect spell, before any perfect storm.

Taking it back some years, it was in the fall of 2009 the occasional pursuit of musky began. During that time, I can recall 38 hours over seven outings of trolling and casting the Ottawa River, only to suffer the loss of one big musky that in the final seconds made it’s attempt to steal a boat-side Depth Raider; which was simply being reeled in one last time before heading home after a season of defeat. Better results occurred in 2010 while during nine days fishing, the WarCanoe managed to boat a personal best 40-incher off the Rideau River. Friends Joe, Pat and Grant riding along in the Bomber also caught decent skis up on the Madawaska, but unfortunately Joe’s big fish suffered a saddening knock-off after my botched net job. Thankfully, Joe was more than just happy enough to have the experience of fighting a truly big fish, as his best before it was about a 3-pound bass. Come 2011 the drive for muskie just wasn’t there. Four outings spread to the Rideau and Ottawa no fish were caught. Missed a good rip and another blow-up while out with buddies Trevor and Kev, and that’d be about it… guessing not really much of a musky fisherman or musky experience overall.

With every intention to chase more musky in 2012, either time or motivation just didn’t permit, and big pike trips filled the gap as well. While driving home from Northwestern Ontario the topic of musky and pike was brought up, and in the same breath so too was the Lake St. Clair fishery. In truth, for me there was little inclination to travel there. Afterall, it’s a long shot, a summer of giant pike could certainly suffice, crossing Toronto irks me, and great musky fishing “should” be found closer to home.

About five years ago while a member of a private board, my eyes opened wide when first witnessing a husband & wife’s report showcasing their spectacular musky results upon LSC. They continued on making the annual pilgrimage and sharing that online with us, and in short order others began venturing there as well. Bottom line was, they were catching musky and making it appear easy. A few great fish in the mix, numbers seemed very intriguing, and potential for giants did in all likelihood exist. Fast-forwarding, in more recent months LSC admittedly crept back on the map. First Ron posted at OFC his awesome account with a number of 50’s, followed by P.F. Jones whom popped an incredible fish from shoreline too. In some magazine I caught Brandon’s Movember-sporting-photo of him holding an autumn jigged river giant, and then finally, my friend Dave was treated to an initiation on LSC with his buddy Elias, that when finally hearing about that day and Dave’s 50+… well… it made this camels back really feel some weight. In the past year alone, guys are proving down on LSC that BIG dreams of BIG fish are becoming a more common reality. Musky got on my mind, and once something takes root in that matter, it’s gonna grow.

October had an opening in the work schedule. Wheels turning I posted to OFC for help and in short time had some good folks PM’ing me with different sorts of info to digest. Appreciated guys, thanks again. The Belle was covered by Andy & George, Thames by Tyler & Brian, and the Detroit by Brandon & George again as well. Gavin pulled a great map source out of his back pocket, Bill pointed to some local websites, Phil said listen to Mike & George, and Mike when getting in touch, by then just affirmed I had a good game plan in motion. One thing was missing though, a partner to share the Lund with… this was until I received this message from out of the blue, “Pick me up on your way by my place. Have always wanted to go there to try something different. I have everything for a good trip and the time off, so make it so and lets go for a few days.” My response to Andy, “Will pick ya up on the way by for sure. We’ll get our muskie on brutha!”

Everything nearly set in motion I had just a couple small tasks ahead to ensure things were totally smooth. First, print up the maps, have a good look at the fishable water and begin envisioning a gameplan with alternate options, and finally, sort out when we’re going. 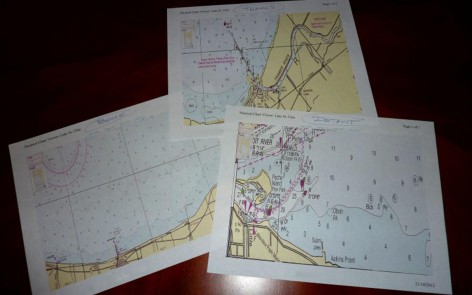 Secondly, prepare the boat. And more specifically, what was needed for that, which were good solid mounts for the Salty’s. So, I got the tools out and made some indestructible posts to sit atop the Cannon rigger pedestals. 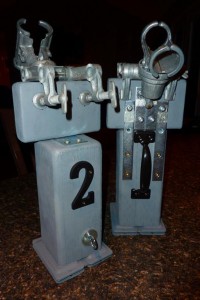 Before departure there was time to check out the build and be sure all would work out fine, in the end I thought the result was pretty mint. The two holders with a couple 8-foot rods out the sides gave nearly a 20-foot spread with rod tips down a foot in the water. Pivoting the mounts, two lures could be side-by-side in the propwash too if that was wanted… MINT! 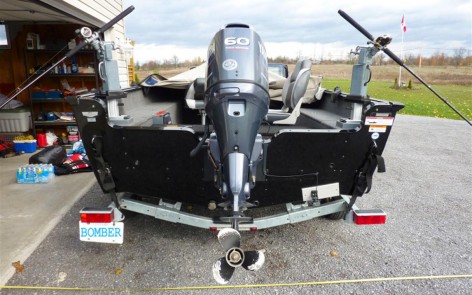 Near the stern, I had previously carpetted some ply and built it to snug over the battery compartments. Some strength and support there, the extra bit of platform nearly adds 4-inches of width for standing upon. Playing fish from the back and working the rods, every bit of extra footing is welcome. 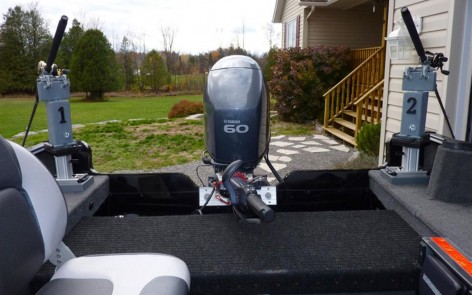 Tuesday morning we made it onto the water early. Within the hour we had a fish. My God… “within an hour,” WE HAD A MUSKY!!! 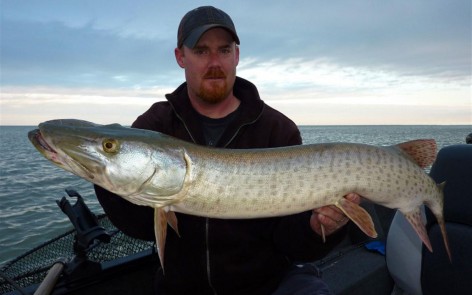 Andy was up next… and at this point, I began shaking my head in disbelief. After catching and unhooking a decent muskie at boat-side, he simply released it quick before calling it, “a rat”… “just a rat.” Here he had never fished LSC and I’d half expected he’d want a picture of his first fish, but Andy was confident there would be more to come and, he’s already caught his lifetime’s share of bigger and better off of Georgian Bay. So I wasn’t going to argue but, told him I’d have to get some pics of him with what he deems are better fish. He reluctantly agreed, after reminding me that this was my trip and he was just along for the ride. Still, he kinda remained set in his ways and gestured his displeasure of my taking photos of him… Andy is a character for sure, certainly a genuine one of a kind. 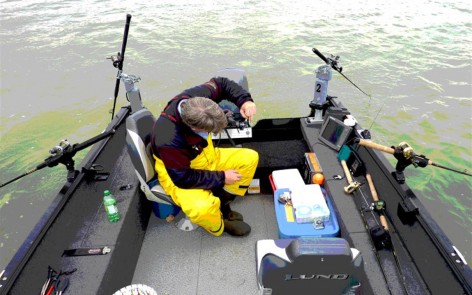 Before morning’s end he got another and I nabbed a couple more… One fish was my first ever tiger muskie. Cool looking suckah!!! 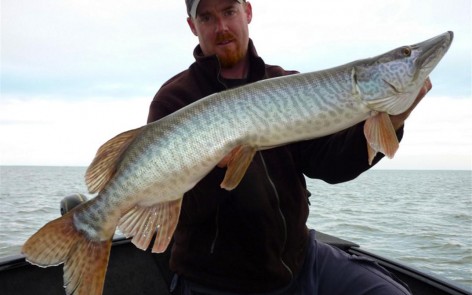 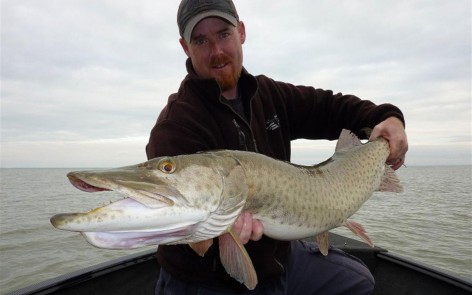 Come afternoon the bite slowed down some, yet pressing on, the two of us searched out more quality fish. I likely picked up a PB with mine but didn’t put it to tape. Finally too, Andy was agreeable with an awesome catch of his own, and the best of the day! 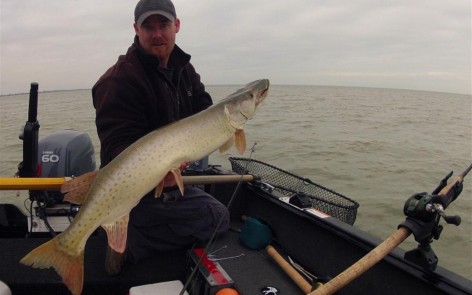 Thanks for posing with one… KnuckleNut!!! 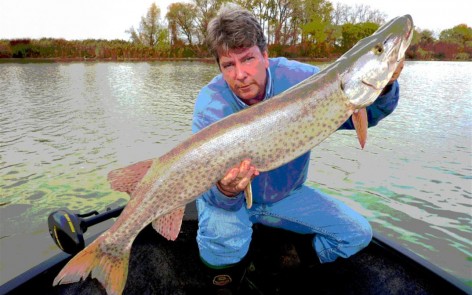 Ten plus hours on the water and I couldn’t believe this place and it’s fishing.

Wednesday morning in the pitch black we hit the Tim’s before making our way through pouring rain to the launch. Upon arrival, the light broke and the skies began clearing, what remained would be a beautiful, calm, sunny day on the lake.

Outside the marina walleye anglers, RCMP, muskie jiggers and trollers, as well as shore anglers, all shared the water while the sun came up. Andy and I took a turn at drifting the river and jiggin’ for skis, this just after bumping into John Bondy while he was out guiding. A quick hello and Andy confessing he left Toronto without purchasing a Bondy Bait, John was kind enough to sell him one cheaper on the water than what I had to pay at BPS. Good of John.

We set to castin’ and jiggin’ ’em up but unfortunately for our time we could only witness three guys in another boat catch and release two of their own. We took off to the lake.

Setting up for the troll we aimed at a pod of “Perchers” way off in the distance, and before reaching them I popped a first fish. A friggin’ beautiful muskie! 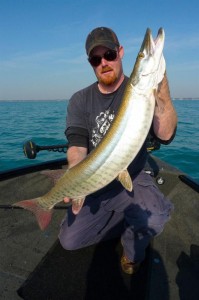 Through the rest of the day we remained on the troll. Andy stayed stubborn with his “rats,” while I enjoyed the limelight on LSC. Could not have asked for a better day. Turned out real hot for October and so we lazily cruised around all over the place. As long as the rods were in the water and we cleared now and again for weeds, we were in the musky game. We did lose more than we caught though… and Andy swore at days end we’d be needing to sharpen up some hooks. 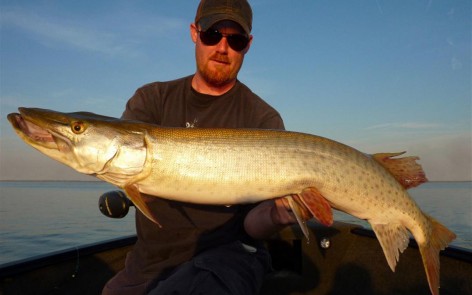 Ending our time, one final dusk fish made an appearance only to catch the sun on the horizon. Another amazing day. 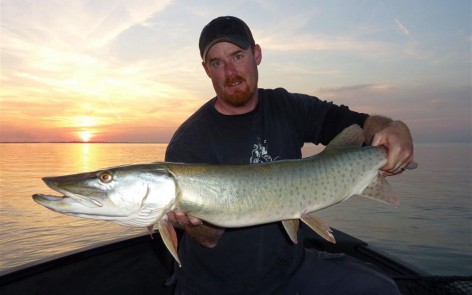 Andy could only laugh at me in the morning when I told him the lucky shirt was going on. So far, through each day and night we talked up a storm, bantered some back-and-forth, worked well on the set-ups together, and by this final day seemed a well oiled machine in the boat. There was no guessing it was going to be a great finale for this team, especially after Andy boated an awesome early fish and was surprisingly happy to pose with it. 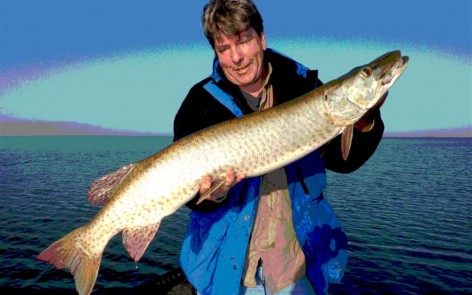 We’d learned that mud-lines were a good bet for fish, as well as any usual things like structure or drop offs; which are actually kinda hard to come across on LSC. Having the maps did help, but on the water having his giant Lowrance just for it’s GPS and hydrographic chart was way better. My Humminbird didn’t have LSC on it’s Nav chip.

We’d started early to get out and hit the big water. Troll… troll… troll. Andy truly is a veteran with this kind of fishing. Being that he actually catches muskie with some regularity, it was a great thing for me to share the Lund with someone who has confidence is his baits and program, as well as experience. This allowed me more of a chance to experiment and concentrate on driving the boat. We smoked the muskies throughout the day. 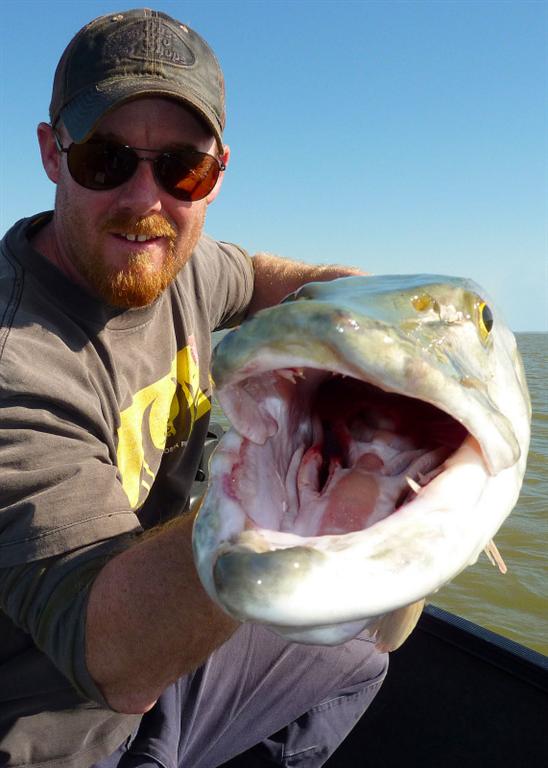 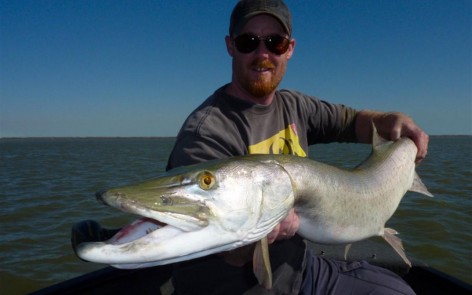 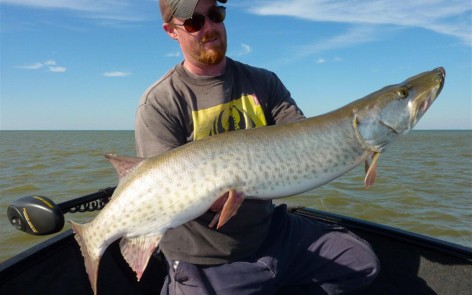 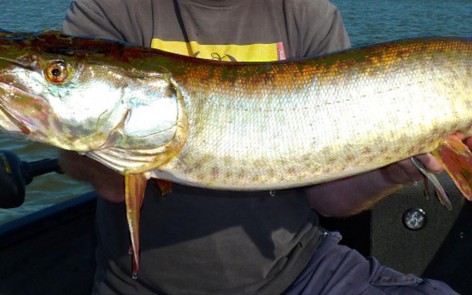 In the last hours Andy sat back and let me at ’em. There was one rip about an hour before sunset that really got his juices flowing but the fish didn’t stay on. This lost beast peeled that two-handed drag steady and constant before a few speedy “zzzut zzzuts” scored one for the fish. It was the 50… but ohhh well..? The short trip in my mind had already exceeded all expectations. I caught more fish in four hours at times, than I did in four years. We averaged a fish caught, lost, or just a good rip every hour over 30 plus hours. Insane!!! Pretty certain Andy walked away from this one super pleased as well. Quality time man, thanks for jumping aboard!!!

Next fish in the pics broke any old PB’s for sure… and then a couple more after it would have easily done the same had they come first. Trolling into last light the muskies just wouldn’t quit, and neither would we. 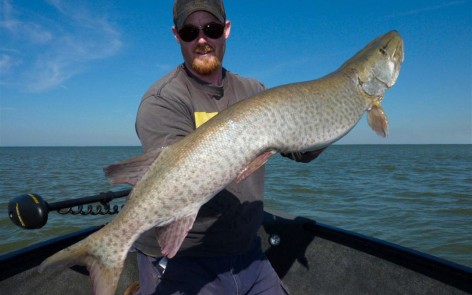 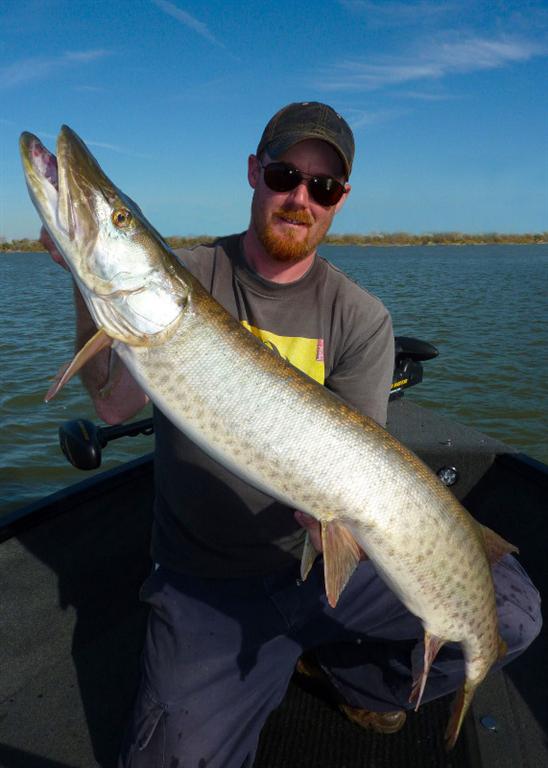 Can surely see me fishing LSC again in the future. All of it seems to hold fish… it is a musky factory down there. Wild!!! 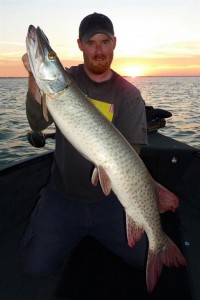 Thanks again Andy, and thanks all for reading…

Photo’s and Story by Andrew Bunker