At age 12, I along with 15 other 1st Georgetown Venturers took part in a canoe trip that started in Toronto an ended at Summerset P.E.I. Our Venturer Company was made up of avid paddlers, and this voyage was our chosen method of travelling to the 1977 world scout jamboree. Travelling by canoe obviously didn’t represent the most efficient form of transportation, but we chose it because we love canoeing. Kayak fishing too is a personal choice based on one’s spirit of adventure. 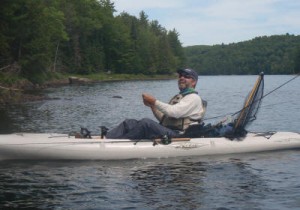 Now that my sight has gone completely, the sensation of being so closely linked to the movement of water has become that much more powerful. The feel of digging in a paddle and knowing that concluding a voyage depends totally on each and every stroke represents a tangible relationship that can’t be any clearer. Canoe tripping in Algonquin Park, shooting rapids on the lower Madawaska River, or riding ocean swells along Cape Breton’s rocky coastline are experiences I enjoy reliving over and over.
Fishing from a kayak ranks as one of my favourite sports as it combines two of my greatest pleasures. And while I don’t claim to be the first, 35 years ago I did carry with me a small hand-line throughout the 2,000 km 36-day canoe trip to P.E.I.

The idea of putting down the paddle and using my legs to power a kayak, for me, is a concept I initially dismissed as a trend. At the same time, the obvious advantages of having my hands free to feel the bite made sense, but kayak fishing isn’t about making sense – it’s about passion.

After speaking throughout the winter with Jason Kirby of Jenda Paddle Sports, I agreed to give HobieCat’s Mirage drive system a try. Already being the owner of a sit-on-top fishing kayak, the Mirage system was of interest for two reasons over and above the obvious advantage to trolling. One, it has a hand operated rudder system beneficial to maintaining a true track – a feature of particular interest to me (LOL), and two, the peddle propulsion system is virtually silent. Not to say someone well trained with a paddle can’t stroke without making sound — it’s stowing paddles and retrieving fishing rods that generates the clatter.

David Mingy, a seasoned kayak fisher, and I set out from Ottawa for a day on the water and fishing. The lake we chose is closed to boats with motors over 9.9hp, and regarded as a consistent producer of quality Bass. 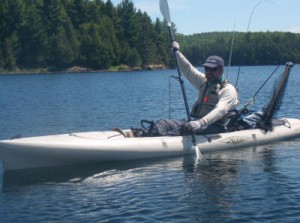 Normally, I’d have aboard my kayak talking compass and GPS systems, but for this trial, I wanted to fully experience what the HobieCat Revolution with its Mirage drive had to offer. Instead, at the tip of one of Dave’s rods, we attached a small bell commonly used for ice fishing.

The idea being that the rod tip would move enough to ring the bell when Dave was underway so I could follow along. The only drawback to a system such as this is that it doesn’t tell me which way Dave’s kayak is pointing until he travelled some distance and it was possible to determine his course. Judging Dave’s speed and the distance between the two kayak’s also involved my maintaining concentration. All this to say, that bell made Dave and his kayak a bit of a target.

Just to be stubborn, I paddled the HobieCat the first half of the day and used the Mirage drive the second half. The HobieCat Revolution 13 tracked well with the rudder retracted, and paddled effortlessly. However, even my experienced stroke and superb concentration resulted in my forward progress resembling more of a bird dog working hard to flush pray.

The lake itself was one typically found in this terrain, having clear water and a shoreline made up primarily of over-hanging deciduous trees and plenty of rock. The bottom dropped off sharply, which meant the targeted area holding fish was between five and 10 feet out from shore.

The first Bass we spotted was floating dead. On closer examination, we discovered a live Sunfish stuck in its mouth. The Bass itself measured to be 19” in length, and while we weren’t able to extract the Sunfish, from all indications it was prospering from its predicament. Ironic just how life can turn the tables on even the surest thing.

Dave and I caught plenty of Bass in the 1-2 pound range throughout the day, but no lunkers. Sunfish were everywhere, and it wasn’t unusual to have a dozen or so directly below the kayak at any one time.

Half way through the day had us about 4km from our launch point. It was time to reverse direction and switch over to the Mirage leg-powered system. The first thing I noticed was just how quietly the Mirage system functions. With periodic course corrections made through the hand-operated rudder system, I could easily parallel Dave’s kayak as we trolled 20 or so feet out from shore following the lake’s contours. While the Mirage drive’s lack of reverse occasionally required I un-ship my paddle, I probably would have managed fine with just a ping pong racket. (One need simply fully extend one of the peddles to flatten the Mirage’s two fins flat against the bottom of the HobieCat.)

By the end of our day, (six hours), I was definitely a convert to HobieCat’s Mirage drive. The next day made me even a bigger believer when I awoke with stiff arms from paddling, but felt no ill effects in my legs. The ease of use and virtual silent operation has made the Mirage drive a definite main-stay in my kayak fishing arsenal.