Crappies In The Crosshairs By Jim Edlund 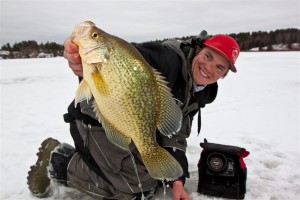 Aaron Wiebe has gained respect throughout the Ice Belt for his innovative techniques and unique perspectives on fishing, like thinking about crappies being a certain distance below the surface versus above the bottom. Photo courtesy of MarCum Technologies

Aaron Wiebe, 25-year-old host of the social media sensation, Uncut Angling, is a big crappie glutton who’s developed a system for putting the crush on crappies anywhere throughout the Ice Belt.

For Wiebe, that means pouring over maps to find less-pressured bodies of water. “Spend an extra hour driving to get on a new lake…fishing off-the-radar spots pays off,” says Wiebe.

“I never think of fish being X feet off the bottom. For me it’s X feet down.”

Based on this homework, Wiebe typically doesn’t need to wonder where the wild things are. Then he and a partner drill holes in expansive grids with a StrikeMaster® Honda™ 4-stroke. “The auger’s so light it feels like an extension of my arm. I should have it surgically implanted,” Wiebe quips.

Once holes are drilled, Wiebe or a partner will drop the Marcum LX-5 or LX-7 transducer, filtering through holes until marks appear on the screen, tightening up the drilling grid when he gets a taste of black (or white) gold. Then, the linchpin is getting baits to the fish as fast as possible—while causing an underwater ruckus to get the attention of the biggest crappies in the school, both visually and via their pressure-sensitive lateral line. 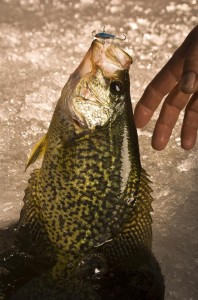 The handiest, most universally applicable tool in the toolbox isn’t the duct tape or WD-40. According to Aaron Wiebe, it’s the Rapala Jigging Rap. Photo by Bill Lindner

“This isn’t dry fly fishing. I use my bait like a megaphone to yell at the big guys in the crowd until they come out swinging. You just can’t do that with 1/64-ounce nanobaits,” says Wiebe. “That’s why I love bigger Jigging Raps for giant crappies…not only are they beefy to bully the little fish in the school and taunt the bigger ones, but the larger and heavier presence has way more attitude than a similar-sized plastic offering, which translates to bigger crappies committing to a kill.”

To get big crappies to commit, Wiebe’s go-to system is 4-pound Sufix® 832® ICE connected to a short leader of 8-pound Sufix Ice Magic sinking mono with a walleye-sized 2- to 3 ½-inch Rapala® Jigging Rap® on the business end. “Visibility is key—Glow Red Tiger and Glow Blue Tiger are hard to beat,” says Wiebe.

Below the rap is a 6- to 8-inch dropper of 8-pound Sufix Ice Magic terminated to a size 6 VMC octopus hook threaded with waxies or a minnow head. “More often than not, the big guys will attack the rap but the dropper is also there to take advantage of less aggressive suction feeding,” says Wiebe.

Wiebe dances the tip of a longer, heavier ice stick with aggressive vertical strokes as he searches out marks on the flasher, fishing down to the marks on the Marcum, not up from the bottom like most anglers.

It’s not a delicate approach, made even more bombastic when fishing with a partner. “We’re constantly tag-teaming holes where we see marks on the LX-7,” says Wiebe.

One opportunity he sees ice anglers miss out on is cranking numerous big fish out of the same hole in rapid, machine gun-like succession. “By the time you get one slab up and off the hook it’s usually over,” says Wiebe. “But the extra weight of a big Jigging Rap is key to getting me back into the school ASAP for another hook-up!”

And, when needed, Wiebe’s not shy about calling in the reinforcements. “I’ll yell to one of my guys to get his bait down my hole and top of the active fish ASAP! Then I’ll drop my Jigging Rap on top of his bait. From there, it’s the delicate play of double-icing fish without tangles…definitely part of the fun!”

TIP: When hole-hopping, swirling the transducer of a Marcum LX-5, LX-7 or LX-9 in a circle temporarily creates a wider ‘ducer cone for big crappie recon, allowing you to key in on fish you normally wouldn’t see. It’s a smart way to pick up the faintest of flickers, which often represent high-suspended fish sitting off to the sides of your hole just waiting to pounce on a Rapala® Jigging Rap® and dropper!