Good Morning; Good Night : Focus on the bookends of the day to maximize your walleye catching success

Cutting to the chase, there are two exceptional times to catch walleyes – sunup and sundown. Sure, there are tinged water ‘daytime lakes’ that potentially produce any ‘ol time. And the most crystalline of the clear lakes generally promote overnight activity. But regardless of the color of the water, to stack the deck in your favor, set your sights on the openings and ends of the day.

Suck it up and get up early if you want to tap the morning bite. My old creaky bones move at a slow pace, but mentally I’m prepared to fly because I want to be setup and fishing before sunrise. And that includes prepping my gear the night before so it’s turn the ignition, warm up the truck, fill the coffee mug, and roll. 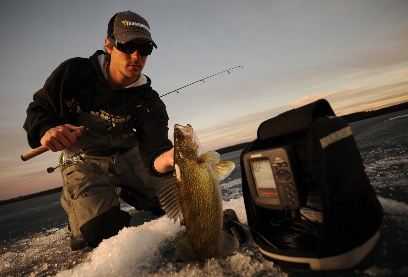 Get out there early and settle on a spot. This isn’t a time to explore. I’ll drill two or three holes and then silence the StrikeMaster. This is more about timing than finding fish. Concentrate on tried and true spots, even bucking your desire to fish away from the masses. Community holes aren’t there by accident. You can beat the regulars at their own game, though, by hooking a walleye before the first light flickers in a hard-house window.

Realize, too, that there are two types of morning bites. One version is where fish move up on key structure during peak feeding times. They move up, eat, and exit stage right…or left. Elsewhere, fish are in the general area all day, and the feeding switch flips at dawn and dusk.

I prefer the first scenario, readying for a preemptive strike, getting out in front of incoming walleyes. This requires that you identify the lanes or entry-points fish use during feeding runs. Think of a catcher waiting on a pitch that’s coming right down the pipe.

One such spot is a significant weededge that drops off into deep water. Find the sheerest, weeded break and you’re onto a primo opening spot. Typically, on northern natural lakes, it’ll be in 12 to 20-feet of water, specific depth dictated by water clarity – the clearer the lake, the deeper the weeds.

Weededges are easily diagnosed on my Humminbird ICE 55 portable flasher. The six-color, fiber-optic display reveals green bars and flickers splaying from the bottom – that’s the vegetation. More flickers mean more weeds, and that’s good. Check one more hole over and the green is gone – I’ve located the edge. Time to fish.

Another low-hanging-fruit-location for early ice is an abrupt shoreline break, weeded or not, especially when it’s associated with a point – rocks making it even a stronger candidate. Specifically, rocks the size of human heads or smaller, like red-stitched softballs. (Gigantic boulders are visually appealing, but not the preferred structure of winter walleyes.)

For reasons I honestly can’t explain, morning walleyes tend to be bigger fish. You might not get bit as often, but the rewards are greater. So put your eggs in the morning basket if it’s trophies you seek.

Assuming I’m sitting over high percentage holes, there’s no reason to mess around with untried baits. Out comes a #7 Rapala Jigging Rap. The classic lure is responsible for uncountable numbers of walleyes, and its effectiveness never wanes. Fish simply can’t smart up to a lure that’s so realistic in looks and deeds.

Color-wise, blue and chrome and black and chrome – long-established producers – are the real deal in clear water. Rapala’s new UV patterns get the job done in darker water. The radiant colors simply pop the brightest, and grab the attention of walleyes that are conditioned to feed more by feel and silhouette. 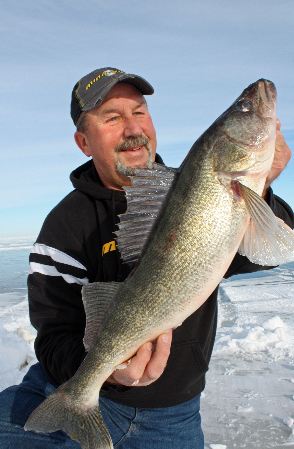 Author and Freshwater Fishing Hall of Famer Tom Neustrom woke before the roosters to snare this mammoth Lake of the Woods walleye. Photo compliments of Humminbird

My jigging motion consists of a one-foot jerk followed by a brief freefall. The Jigging Rap swims a tantalizing half circle and then settles into the death zone. Walleyes have a knack for attacking on the drop, just before the Rap goes still.

Pairing with matched fishing line is important as well. For the sake of sensitivity and strength, I jig with Sufix’s new 832 ICE. It’s unmatched in sensitivity and sheds water like Gore-Tex, which is no coincidence, since the water repellant is actually in the line’s blend of materials.

Now as much as I embrace the feel of a superline, I also respect the need for intentional stretch and invisibility in a line. Consequently, I factor in an 18- to 24-inch span of Sufix fluorocarbon between the spooled line and lure. The extra tether is transparent in the water and yields just the right amount of shock absorption to properly penetrate a walleye’s maw. Connecting the two lines is a translucent, self-lubricating, and lightweight InvisaSwivel. The rotating InvisaSwivel also serves to eliminate line-twist, which unattended to, can adversely affect a Jigging Rap’s intended action.

Jigging and managing the bait and line is a 28- to 30-inch rod with a tip soft enough to let a walleye self-set before I give it the serious hurt. Stiff rods set too hard, and too abruptly, so either the lure snaps free or the fish spits out the bait on account of abnormal resistence.

Daiwa produces reels that perform like champs on the ice. For walleyes, my preference is the 1500 Ballistic. Its air spool is matchless in cold conditions. As an affordable alternative, put stock in the Aird 1500. At under $80, it’ll impress the pants off of you.

I’ve beaten the morning drum to death, but for good reasons. First, it’s the best bite of the day. Secondly, the same principles apply to late-in-the-day walleyes: choose a high-percentage spot; drill just enough holes to be dangerous; operate with a Jigging Rap; and man your station well before the sun smooches the tops of the trees.