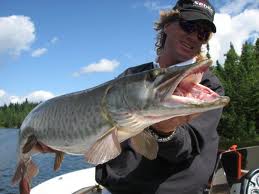 I’m just a lucky guy I guess. First, a great friend and guide in my home area of Hayward, Wisconsin, Bill (Fuzzy) Shumway, years back, took the sonar-lure concept and made it bigger – muskie sized. I remember pondering the whole thing when he first showed me the Fuzzy Duzzit while fishing together. I was lucky there since I was one of the first to get a hold of one. And too, just prior, I got to know a guy who, very quietly caught more big muskies from area lakes than anyone. He was ahead of his time on fishing bottom-hugging muskies on hard-to-soft bottom transitions.

I recall some joy back then, in coupling his knowledge and Fuzzy’s new lure – to literally “open up” an area body of water just generally accepted to be a tough fall lake. I found fish in different areas and on totally different structures, from where most of the pressure was directed. It was a tough pattern to figure out on this water, since the forage didn’t expose itself on electronics well at all. And, it generally meant working the deep edge (taper to main basin) on very sharp, irregular breaklines … found the best way to be effective was vertical.
Other than heavily weighted live baits, I’d never had the tools for the job. To fish 15 feet or more, vertically, and still cover some water, requires specific stuff. Sure, jigs were around and used, but ¾ or 1 ounce jigs don’t cut it here, unless you’re at a snail’s pace. And one thing that’s always been different with muskies (and will continue) – as compared to other species – is that the apex predators are present in the lowest densities; you have to cover some water to increase your odds of coming in contact with them. Waiting for them to come to you gets old.

Certainly it depends on the body of water and its make-up, as to how effective or “appropriate” the vertical jigging approach will be. It has to do with a combination of things, one being the lake makeup mentioned above: sharp and irregular breakline. If fish are holding tight, especially if at the base of the break, vertical presentation becomes the most efficient way to go – and can be the only way to go. If the fishery has bottom-hugging forage species as the predominant source, you have the ultimate case for vertical approaches. Of course then add tough conditions, cold water and/or just a bad attitude where fish just aren’t willing to exercise much for a meal, and going vertical really becomes the only logical option. Nothing says “in your face” like vertical.

With the thought of fish not wanting to move for food, consider what an irregular, sharp breakline means with regard to a normally very effective water-covering tool: trolling. To varying degrees, it becomes less and less efficient the more complex the cover gets. If it’s really sharp-breaking it can just be hard to place the right lures, at the right depth – and coordinate that with boat control (basically perfect is required and tough at 3+ mph) to be effective. If you can do all of that perfectly, you can crash rock points effectively, and technically even cover well – very sharp edges that are straight.

But there’s simply nothing at all that you can do with the inside stuff; the “cups” in the structure. You essentially can’t hit those spots trolling. “Can’t” is a big word here, but where inside swings are fairly tight, and you hope to trigger muskies at the base of the break anywhere on the inside – or in the case of a muskie that’s backed-in and parked perfectly at the base of the inside turn, it’s nearly impossible to get to that fish, and certainly so with your standard “one” pass that covers water. (I’ve used the word muskies and thought, I should say esox. Pike nuts, if you’re not considering all this, I can assure you that cousin Lucius has been attached to many a Fuzzy. Actually, some of the largest pike in my boat have come this way.) 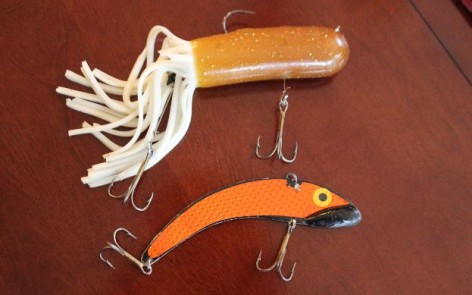 The same is realistically true for casting. Especially in deeper ranges, sinking baits are a good tool, but very time consuming for them to get where they need to be and “slow” to keep them there. Deep divers can work too, but how much of their time is spent in the effective zone when considering bottom-related fish? And when there are sharp, twisting breaks, multiple casts in tight repetition are necessary to attempt to cover it. All things considered, the efficiency is lost here too.

Vertical is also perfect for small, precise spots of any kind. Smaller reefs, especially sharp edged ones, distinct holes and any deeper current breaks existing in natural or wind-induced current are examples. Distinct holes can be a great fall target, especially on reservoirs, and are best fished vertically. Current breaks may be mid-channel hump, logs, whatever (likely fish located precisely on the back side of the current). Fish cribs are another fine example where fish may be tight, and here, trolling and casting become not only hard to do, but time-consuming and expensive. Though I have very little experience with it, standing timber, is another place where vertical makes tons of sense.

When faced with situations like those outlined, what I’ve found to ultimately be the most effective, is precise boat control, coupled with both vertical and casting presentations. It pays to have help. Two or three anglers are much preferred. Basically, though, boat control is maintained on the breaks (prime zones), in somewhat of a zigzag pattern, making certain to cover the base of breaks, creeping a little on to flats adjacent. Anglers are simply keeping “covering everything” – in mind all the time. At least one presentation should be vertical. Different casting presentations are used to check the shallower zones, parallel edges and check for a potential suspended fish pattern. Of course with several anglers, adapting to patterns found may result in more, or less vertical.

Really, by far the most important job here is boat control; simple as that. All anglers need to be paying attention, but the person in charge of the boat really has to be concentrating at all times, making certain that not only is there consideration for covering the different areas of a break for potential patterns, but also to control speed and movement to make certain no fish are passed-by (not gotten close enough to). It’s not easy when calm, and it’s even harder with gusty winds.

Truly, if there was ever an ultimate case for quality electronics for esox-fishing, this is it. With gusty winds, and/or if you feel two passes on a structure to be necessary the way it lays, plotter trails are invaluable to make certain everything is covered. And, it’s simply a huge aide to have the large, color screen as on the unit I use, the Lowrance HDS-10 Gen2, to really be able to best distinguish bottom-hugging fish. A split-screen with zoom on these units is frankly, just unfair (of course you still have to make them bite) when in comes to being able to see fish. It helps to distinguish forage, and bigger fish show up even better. Lowrance’s StructureScan really comes into play here. Being able to get detailed images of not only what’s directly below, but also off to the sides, allows you to find forage and key cover elements that would have been easily missed with older sonar technologies.

Anyone using vertical presentations ideally should be watching a graph full-time. It aids in keeping up with depth adjustments and obviously you want to be watching for big marks. The combination of vertical and casted presentations – with good boat control is just flat effective for these situations. Yet, since vertical isn’t nearly as glamorous as casting, it’s easy to simply forget, even when you know better.

I was reminded, again, of the effectiveness of this tactic a couple seasons back while filming a muskie segment for The Next Bite television show. Huge northwest, cold-front winds changed my plans quite drastically the first day – as I was limited to a sharp, western-shore rock break (only place I could hold the boat position to effectively fish). None of our casting presentations were working, but as I noted the forage seemed to be tight-to-bottom on the base of the break, I dug in the box for old Fuzzy. Three muskies were taken vertically while other presentations didn’t work all day. Later, a nice muskie on a crankbait too, but remembering to think vertical turned what would have been one-fish day to a four-fish day. Big difference.

These days the door is opening wider, as there are quite a few new options coming in lures specifically designed for vertical use. Soft plastics are certainly included now, like another of my current favorites for all ranges – Red October tubes. Rigged with heavier weights, these work great for vertical presentations, and in fact, they were initially designed for this application. Even so, with many more options besides the Fuzzy becoming available, vertical fishing really is (and it almost seems odd to say it these days) still something relatively new and little-used in tactics for esox-chasers. And it’s got me thinking all over again. In sharing the above story with Bill Shumway, he mentioned that he had been successful on the Fuzzy Duzzit as a “comeback” presentation on a big fish. He’d raised it, and returned again with other presentations, only raising the fish again. Since the fish was located on a break, he thought of his bait, tried the fish again, and caught it. How many times have you heard about coming back on a raised fish vertical jigging …. Hmmmmm? Like Pearson says: thinking is just being thoughtful.