Fishing for Walleye in Deep Water

by Gary Parsons and Keith Kavajecz

What’s the deepest you’ve ever caught a walleye. While we are sure there are exceptions, it’s a good bet that the vast majority of you have never caught a walleye in water deeper than about thirty five feet. That’s because for most of you there’s an imaginary barrier beyond which you lose confidence in the fact that you’ll catch any walleyes. It’s true, this mental barrier does exist, and because of it most of us didn’t fish deep water for years. There were times when we’d mark fish in fifty, sixty, even seventy feet of water or more and totally ignore what our eyes were telling us simply because we were not convinced that the “marks” were actually walleyes. Oh, maybe they were catfish, or possibly trout depending on the body of water, but certainly not walleyes. Even if we allowed ourselves to think they might be walleyes, we guessed that they’d be uncatchable. Wow, what a mistake!

It’s tough to say what originally built “the barrier” in anglers’ minds; maybe it was the fact that so many walleyes are caught during the dusk and dawn time frames as they move into the shallows to feed. Maybe it was the limitations of the equipment that was available in the early years of walleye fishing. Whatever the case, fishermen are, as a group, prone to “traditions”, and once a “tradition” is set in place, it may take years, even decades to change their way of thinking. However, we like breaking traditions and we like to fish away from “the crowd”. That mind-set is what drove us to change our way of thinking with regards to those deep marks we were seeing on the locator. It’s a move we’ll never regret. 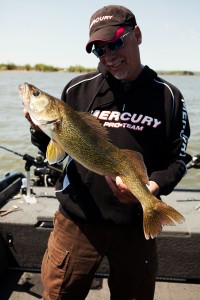 Gary Parsons with a Walleye: If you’re having trouble finding and catching summer walleyes, take some advice from one of walleye fishing’s greatest legends and “Look Deeper”. Photo Courtesy Hannah Stonehouse Hudson/StonehousePhoto.com.

Like so much of our “grass-roots walleye theology”, competitive angling inspired us to begin looking for fish that other anglers were ignoring. We knew there were pockets of fishermen around the country scoring on walleyes in deep water. These were primarily western and mid-south reservoir anglers … bass guys … that were fishing jigging spoons on deep structure in the winter months for spotted bass and catching walleyes. That coupled with the fact that we kept going back to all those times we had seen really good “arcs” in the depths of lakes like South Dakota’s Lake Oahe and North Dakota’s Lake Sakakawea really got us thinking. These were big “walleye factory” type bodies of water, loaded with smelt and other deep water forage. “Why wouldn’t those deep marks be walleyes” we thought, “And if they ARE walleyes … we know we can get them to bite”.

It was about this time, early in our tournament angling careers that we met and became good friends with walleye legend Bob Probst. There are a thousand stories told amongst walleye anglers about Bob, but the incident that stands out for us was a tournament on Lake Oahe many years ago. The bite was tough, but if you worked hard, you could scratch out five or six small weigh fish a day. In that particular tournament, Bob caught three fish in two days of competition, and almost won the whole ball-of-wax because those few fish he brought in dwarfed anything the rest of us were catching … fish in the eight to ten pound range. When it was all over we walked up to Bob and asked, “Bob, how do you do it? How do you catch these huge fish when everyone else is busting their buns for dinks?” Bob … being the eloquent and elaborate individual that he is said “Look deeper.” That’s all he told us, “Look deeper.”

Well we began experimenting … working deeper and deeper structure … in reservoirs and in natural lakes. Innovations in equipment like powerful sonar fish finders, from Lowrance’s 350A in the old days to today’s “super” units like the HDS-10 Gen2, made finding these fish easier. Improved tackle introductions like sensitive graphite rods, no-stretch fishing lines like Berkley FireLine and the ever popular bottom bouncer made fishing deep water more effective. And now as we look back on our tournament fishing careers … much of our success has come fishing deeper than average … deeper than the majority of the anglers we compete against.

Fishing deep water structure for walleyes has taught us some key things:
1.) These deep fish tend to key on forage like smelt or other deep water bait fish.
2.) They are often relating to the thermocline.
3.) They’re suckers for a slow presentation … if they’re tight on structure a bottom bouncer rig tipped with a plain hook and big minnow (Creek Chubs are by far our top choice) is tough to beat … if they’re scattered along expansive break lines, then slow trolling with crankbaits on lead core line can be a good option.
4.) These tend to be the biggest walleyes in the system … at least bigger on average than fish being caught shallow … and
5.) Fishing these deep water walleyes can be a gamble. You’re typically fishing for fewer bites, and some days you’ll come up empty handed. But on those days that you tap into the “mother lode”, it can be the most exciting fishing of your life.

We must stress here however, that fishing for deep water walleyes (or most any fish in deep water for that matter), requires some responsibility. If you don’t do things right, you’ll kill many, if not most of these fish. You need to fight the fish in slow … really slow. Jerking a walleye up quickly from these depths will blow up its air bladder and make the fish un-releasable. While there are various methods of combating the effects on fish brought up from deep water, it would take more than a short article to explain the details of doing them correctly. Suffice to say that unless you’re keeping a few “eaters”, fish caught from deep water should be released as soon as possible.

If you’re a walleye angler suffering from the dreaded “Where did they go?” syndrome so many fishermen run into every summer, break down that “ depth barrier” and follow the advice of one of walleye fishing’s greatest legends … “Look deeper” for your Next Bite.

Editor’s Note: If you have questions or comments on this or other articles of ours you may have read, contact us through our website at www.thenextbite.com.