It seems that most people’s idea of fishing “early ice” conjures up the image of the lone angler, trudging onto a remote frozen lake or pond to huddle over a couple holes chiseled in the ice as he waits quietly to catch a few fish for the evening meal. Now while that’s a nice and serene scene, in reality, modern ice anglers are about being efficient on the ice – covering water, finding fish and triggering more bites. Ice fishing today is much more like open water fishing than ever before. And like fishing in open water, the best anglers hit the water (or ice in this case) with a strategy to get more bites.

Anytime you are talking about fishing “early ice”, the first part of the strategy has to be safety. No one wants to start off the ice fishing season falling through thin ice. For that reason, its often best to concentrate your early ice fishing efforts on smaller bodies of water that tend to ice up a bit earlier and quicker than larger lakes. Smaller lakes are also going to make it easier to walk out to key areas, as early ice is rarely thick enough to support anything other than foot-traffic, or perhaps in ideal conditions, snowmobiles or ATV’s. Fishing with at least one or two other anglers is also a good safety idea, as well as giving you more lines in the water to help pattern the fish. 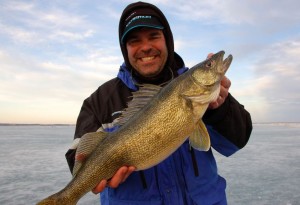 Keith Kavajecz with a Walleye: Like fishing in open water, the best anglers hit the water (or ice in this case) with a strategy to get more bites.

Once you are comfortable with the ice conditions, the next step in the strategy is to set up on the best walleye-holding structure. This is another place where fishing smaller lakes can be advantageous as they give the fish limited places to hide. Typically we will look for deep flats associated with the most prominent points on the lake. These are the flat areas right where the point bottoms out as it enters the main basin. Depending on the body of water, the flat may be 15 feet deep or 25 feet, but it will usually be near the deepest water in the lake. This is something we have seen time and time again over the years; on smaller lakes, most of the fish will winter in the deepest parts of the lake. In some instances there may be several such spots to choose from, but in most cases on small lakes there will only be a couple of these structures. Utilizing a good map along with a GPS mapping device like the Lowrance Elite-5 Fishfinder/Chartplotter will help a great deal in pinpointing these spots.

Finding out how the fish are relating to the point will be the next piece of the puzzle. Walleyes will move up on the points from time to time, but for the most part will roam the flat. They may be relating tight to the base of the point, or they could be scattered out across the flat. Much will depend on where the forage is located and the walleye’s general mood. The key will be to drill plenty of holes, covering all areas on the flat. Now its time to set the bait. This is one time of year where tip-ups are the way to go for finding where the fish are. In states like here in Wisconsin where anglers are allowed 3 lines each, two fishermen setting out 6 tip-ups can cover a flat pretty effectively. In areas where only 2 lines are allowed, it may take a bit more time or more fishing buddies to narrow down a locational pattern. We will also set p in holes between a couple tip-ups and jig with a more aggressive jigging lure, but in most cases this acts more as an attractor, drawing fish in that are triggered more by the baited tip-ups. For whatever reason, the tip-ups just seem to be the way to go for early ice walleyes on small lakes.

As far as where to put the tip-ups, you’ll want at least one set right at the base of the point, and start spreading out, making sure to cover the flat thoroughly. These walleyes will typically be tighter to the bottom so you want your tip-up lines set no higher than a foot up. For rigging tip-ups, we like Berkley’s Tip-Up Line (20 pound test) as the main line, and tie on a small swivel that we use to attach the and a leader of 8 or 10 pound test Berkley Vanish Fluorocarbon leader Material. At the business end we tie on a Mustad Double Wide Fine Wire Bait Hook (model 10548R). In the early part of the ice fishing season the walleyes tend to be a bit more aggressive eaters so we will go with a larger #1 size hook and a 4 to 5 inch minnow (like a Sucker Minnow or Chub). The minnow is hooked through the back with the hook parallel to the dorsal fin and the point of the hook facing the head of the minnow. We find this set-up really increases the hooking percentage even over using a treble hook as many anglers prefer on their tip-ups. As the season progresses and the fish get more “finicky”, we will drop down in bait and hook size accordingly. 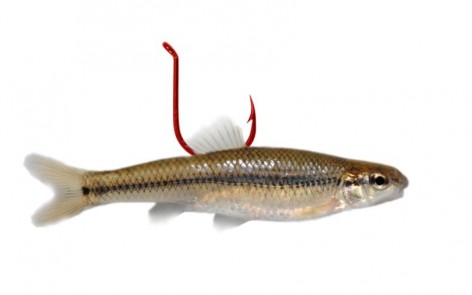 Minnow on hook: The minnow is hooked through the back with the hook parallel to the dorsal fin and the point of the hook facing the head of the minnow. We find this set-up really increases the hooking percentage even over using a treble hook as many anglers prefer on their tip-ups.

Early winter can throw some nasty weather around too, so while it’s important to stay “light weight and mobile” on early ice, a small portable shelter like the Clam Fish Trap Trapper can be a life saver. This shelter is light enough to tow along (only 38 pounds), plus it functions as a great “trailer” for hauling your gear. Plus, the Trapper makes the ideal “base station” for watching tip-ups and enjoying your time on the ice.

Smaller lakes are a real great place to start off the ice fishing season for a lot of reasons. They tend to ice-up first, the fish are typically fairly easy to locate, and small lakes tend to have a “shelf-life” in winter since their oxygen levels drop off quicker than larger lakes in the winter, making the fish more lethargic later on and tougher to catch.
With the right strategy, early ice walleye fishing can be some of the best action you’ll have all year. So be safe, go prepared, and get your winter started off right with your Next Bite.

Editors Note:  If you have questions or comments on this or other articles from Gary Parsons and Keith Kavajecz, visit their website www.thenextbite.com.