A Return to Canada Fishing Camp 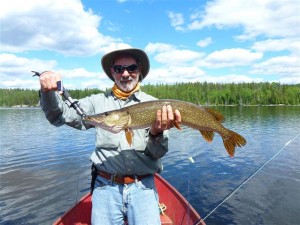 Our week at Lost Lake Wilderness Lodge in northern Ontario fulfilled my desire for one more Canadian fishing experience. Joe Bruce set up the trip with the lodge based on internet and phone research, and I confirmed details of the trip with owner, Tony Thomas the Harrisburg outdoor show this winter.

Rick Boulin and Alan Feikin rounded out our foursome. The appeal of Lost Lake was the catch-and-return emphasis on most of the 10 lakes and the diversity of species, with smallmouth bass, pike and walleye the main attractions with brook, rainbow and lake trout possibilities in some of the more remote lakes. We are all fly and conventional light tackle fisherman, and Rick, Alan and I like trout fishing. 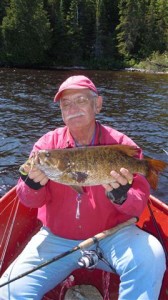 With new waters and so many possibilities, we overloaded Joe’s Caravan for the day and a half drive to the lodge, including a tortuous grind through Toronto traffic. We met Tony and Melissa at the office, unloaded our gear at our assigned cabin, then met with Tony who handed us maps of all the lakes and gave us notes and marked key features for the major waters. Since the lodge was founded in 1949, and this is only the second year of operation by the Thomas family conditions were about as rustic as I expected, though major upgrades to the cabins and some of the boats are under way.

At the dock near our cabin we were assigned a pair of comfortable16-foot aluminum boats, and each included an 9.9 to 15-horsepower motor and a depth finder. These served as fishing vessels for Lost Lake and adjacent Calcite Lake and as transportation to portages with our gear to several other remote lakes, where leaky but adequate steel boats (scheduled for replacement) with good motors awaited us as our fishing craft.

Dinner that Saturday evening was the first of an unbroken series of week-long feasts, all culminating with home-made pie. With nearby waters and daylight from 4 A.M. until 10 P.M., it was possible to fish before the 8 A.M. breakfast, all during the day with the pack your own lunch provisions, then after the 5 P.M. dinner, it was possible to go out three times in a day. As weather allowed, we usually fished at least twice and sometimes all three “shifts.”

Our strategy of scheduling our trip early in the fishing year for northern Ontario to get the shallow water bite with fly and light tackle worked. All week we used spinning tackle to work pencil grass beds and shoreline structures such as fallen trees, beaver huts and boulder-studded shorelines with unwieghted soft plastic Zoom Super Flukes and Swimmin’ Super Flukes in regular and Jr. sizes with spinning tackle and worked the same areas with 7 and 8-weight fly tackle, floating lines and Joe’s Bullethead Deceiver and Bendback flies. In the clear, tannin-stained waters, sometimes only a foot or two deep, we could often see the surface bulging or weeds moving or see the fish coming after our lures and flies. 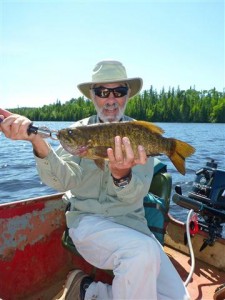 We switched to jigs and grub combinations occasionally to fish rocky shelves and took our few walleyes as bycatch to the superb smallmouth and pike fishing. We took only a couple of bass on topwater presentations. I soon ate my words questioning the lodge’s 2 to 4-pound smallmouth claim; that’s exactly what we caught along with pike ranging from 2 to 8 pounds and a handful of walleyes up to 3 pounds.

As Rick Boulin commented, the week just flew by in a blur of lake and fighting fish, and we quickly lost track of numbers. When Joe estimated we were catching 200 fish in the week, we did a count of the last day’s fishing: Joe and I took 25 smallmouth and pike and Rick and Alan took 20 in 6 hours of fishing at Everett Lake, so again, my skepticism was misplaced. 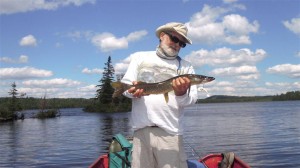 We quickly became friendly with six fishermen from Nova Scotia. They were targeting walleye and trophy pike using mainly the tactics of trolling and backtrollling, and did catch more walleye and big pike than us. We visited the trophy pike lake, Lake Bloom, once, but decided results with our tactics produced no better results than other lakes and didn’t merit the 1 ½ to 2 hour journey each way that included two portages and long, slow runs through narrow channels. Some of this group tried a couple of the trout lakes and advised us the cold weather peak fishing had passed. So we didn’t want to leave great fishing for lesser fishing.

Our groups really hit it off, so they invited us to their “campfire,” a fishing story session late one evening. I turned in early, but the other three in our party went and returned with glowing reviews of our newfound friends and their Screech Rum.

Our Canadian friends also solved our minor complaints of the week –- mosquitoes. At their advice we purchased a ThermaCELL mosquito eradication unit. Running it a couple of hours in the evening cleared the cabin and made for restful, and well-earned, sleep. 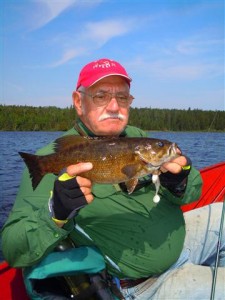 Rick Boulin got to add a couple of more birds to his list and we all enjoyed seeing the loons, beaver, black bear and moose associated with north country. We also saw enormous evening hatches of Hexagenia, at over an inch long, the largest of the mayflies. Fish gorged on the emergers in the evening, which probably suppressed morning fishing somewhat, but we were able to get in some surface action on spin tackle and with fly rod nymphs.

Our Nova Scotia friends already booked a return trip for next year, and some of our group are considering it. It’s a long drive, and more than somewhat rigorous, but lost Lake Wilderness Lodge is worth it.

Besides fishing and hunting, the lodge offers a number of other activities. See www.lostlakelodge.com or call 1-888-279-9977.