I had no idea how my wife was going to react to what I was about to tell her. We were nearing the end of July 2012, and along with that, I was nearing the end of one of the longest years of my life. The previous October I had been diagnosed with cancer and for the last ten months she and I had shared a rollercoaster of emotional ups and downs through a long series of hospital stays, radiation treatments, surgery and finally post-surgical chemotherapy. The treatments were about to end and we had been busy discussing some kind of trip to celebrate the milestone of my getting a clean PET scan and moving on with the next phase of my life.

We both had lots of ideas about what would be fun and something that I could handle after the year had reduced my weight by over eighty pounds and had left me substantially weaker than I had could ever remember. We were both emotionally drained as well from the unending trips to the hospital and the cancer center. It had not been an easy year by any standard.

Ocean cruises had been discussed as had a variety of potential beach trip locations where we could relax and I would not have to spend much energy—-but I had other ideas. I was about to surprise my wife by suggesting a fishing trip to Northwest Ontario near Red Lake. My son and I had visited Angler’s Kingdom, operated by Kevin Geary and his family on Lake Nungesser, a couple of years earlier and I had been yearning to go back ever since. I had suggested this trip a couple of other times but I could never quite talk Judy into it. She was not sure about how she would handle a week long trip to a remote fishing lake where some of the conveniences that we take for granted might not be available.

Things were different now though. She had already informed me that she was willing to go do whatever I chose to do and I was not about to let this unique opportunity pass me by. I knew that Judy liked adventure, that she loved being outdoors and that she would enjoy the chance to visit some pristine wilderness. Angler’s Kingdom would offer all of those but it would also offer me something that I could not put a value on. This trip would afford me the opportunity to do something that I feared I had lost when I was originally diagnosed with cancer. The months of treatment had left me with some lingering doubt about what I could and couldn’t do anymore. I needed to go out and prove to myself that I could enjoy the same things that I had always enjoyed and spending time on the water with a spinning rod in my hand again was going to get me over that emotional hurdle and provide some validation. This was going to be a lot more than just a fishing trip. It was going to be large step in my mind towards recovery.

True to her word, Judy was quickly on board with the idea of making the trip and three weeks later we were on our way to the walleye and northern pike fishing paradise of Angler’s Kingdom. We flew from our home in Phoenix, Arizona, to Winnipeg and then drove to Kenora, Ontario and spent the night there. The next morning we got up early and headed on to Red Lake, enjoying the scenery and the lake views as we made our way north. One of the things that makes Angler’s Kingdom unique is that you get to the lodge by boat, instead of an airplane, and yet still enjoy a remote location. We arrived at the bridge/river crossing at the appointed time and were happy to find Tyler, one of Kevin’s staff there waiting for us as promised. He quickly loaded our gear into the boat and within a few minutes we were on our way upriver towards Lake Nungesser. 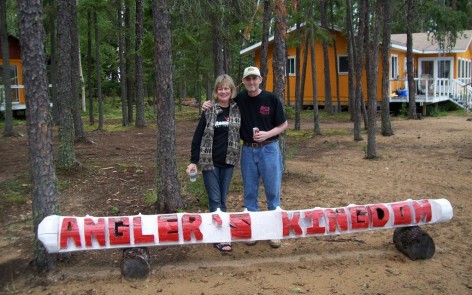 Judy was pleasantly surprised when we arrived at camp. Angler’s Kingdom sets on a beautiful little cove that is protected from the wind and the water that clear August afternoon was like glass. The lodging is rustic, but very comfortable, and her mind was put at ease as we settled into our cabin for the week. We spent the afternoon getting our gear ready for the next morning and then headed off to dinner where we once again were greeted by Bel, Dennis and Dawn—additional members of the friendly Angler’s Kingdom staff. We had selected the American Plan which included all of the delicious food you could eat served family style topped off by desert every night, along with breakfast each morning and a lunch packed so we could take it on the boat. My wife was put at ease quite quickly when she realized that there was another lady in camp, along with a couple of other families as well. Meals provided the perfect opportunity for guests to intermingle and introduce themselves. The atmosphere at Angler’s Kingdom was very congenial and it wasn’t long until we felt we were among friends. 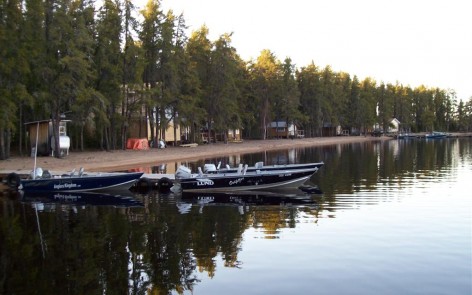 When you make a trip to Ontario one of the things that you grow to expect is good fishing and we weren’t disappointed. I had decided before the trip that we would focus on catching walleye as I wanted my wife to have plenty of chances to catch fish. Kevin was more than accommodating and before we eve left the dinner table that first night he made sure that I had a map marked with several good fishing spots. He also shared information on what depths the fish had been biting at—and that proved to be valuable information.

Much to our delight, Kevin and one of his staff were on the way out on the lake when we were leaving the next morning and he quickly volunteered to lead us to a spot that would get us off to a good start catching fish. Kevin quickly marked some fish for us and within minutes my wife had her first hook up—a nice healthy eighteen inch walleye. I don’t know who had the biggest smile, Judy catching her first fish or me, so excited about being on the lake that I was thinking about something other than my battle with cancer for the first time in months. The trip was already having the desired effect of freeing my mind and my spirit and my thoughts were totally focused on being out on the lake again.

Judy and I were getting the true Northwest Ontario experience. We would continue to move from spot to spot over the course of the week catching fish after fish; but always taking the time to enjoy the scenery and the solitude of the lake, most of the time with no other boats in sight. We laughed more that week than we had in the previous ten months. Before the week was out we realized the trip had provided everything that we had hoped for and more. The amazing fishing had been the “the icing on the cake.” Before the week was out we had caught and released a lot of very nice walleye and my wife had hooked several large pike on the jig she was using. The fishing highlight of the week was the near twenty pound pike that she was able to bring to net but this trip had been about a lot more than just the fishing. 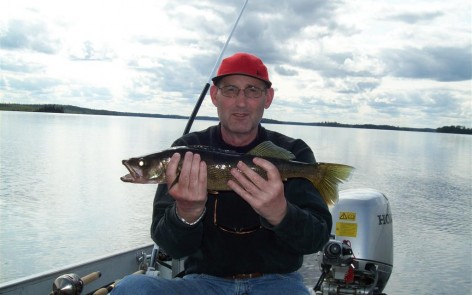 The night before we were getting ready to leave the entire trip was put into perspective. We were discussing all of the things that had occurred during the week. The two of us had got to share a new adventure and make some new friends. We had been able to experience the beauty and the majesty of the outdoors in a place that completely freed our thoughts.
I was yet to experience the final reward of the trip and the next morning was the biggest shock of all. We were packing up our gear when Judy turned towards me and said “When we come back here the next time we should———-“. I never heard the rest of her statement. . I was already thinking about the future and all the possibilities that it held. I now realized that those thoughts were completely different than they had been a week earlier. 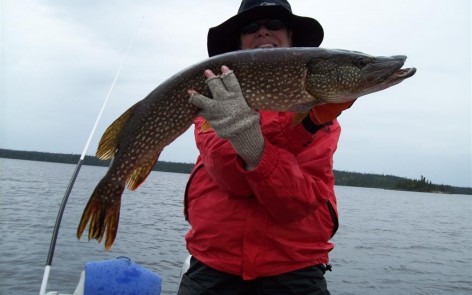 P.S. Judy and I are already talking about our next trip back to Angler’s Kingdom — even as soon as next year. My son wants to go again and several of my friends are now talking about going too so that may mean more than one trip. August of 2012 and that trip are always going to hold a special place in my heart.